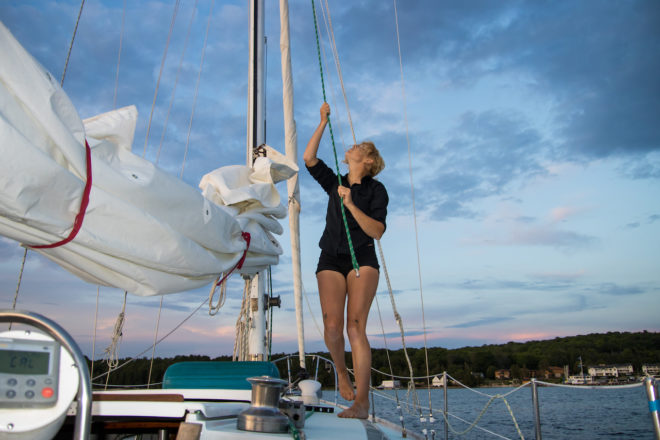 Gwen Whitney’s journey to Door County started with art, but has taken her to the lake. Photo by Chris Rugowski.

Born in Milwaukee to a working-class family that never sailed, Gwen Whitney was unlikely to become a sailor. Still, she put her sails to the wind, obtained her captain’s license, bought a fixer-upper in an auction and has spent the last three years refurbishing her vessel, Squall, with the help of sailors throughout Door County.

Her journey to sailing, and to Door County, started by going to art school and traveling the world. While on a road trip through Spain, her brother asked what she was going to do with her life.

“You can’t just keep traveling around,” he said.

Whitney had visited Door County once and knew there was a strong community of artists here, so she took a stab at moving to the peninsula in 2015 and got a job working at Hands On Art Studio.

“Summer came, and I didn’t really want to live in a two-bedroom house with 10 people,” she said. “I was looking for another job, and my friend suggested Sail Door County, helping with the schooner Edith M. Becker. So I lived on the boat, and we did about two months’ of maintenance. It’s all tough work, and then we finally went sailing. That first day, I fell in love.”

Whitney found out she could become a captain in a year, so she spent the next year getting her sea time in and training for the captain’s test. As it is for so many in the area, housing was an issue, so she came up with an unorthodox solution.

“I figured having a boat would be easier than finding a house or an apartment long term,” she said. “So I started looking at boats, and my lust for sailing around the world grew.”

She searched for a boat similar to the Cal 40, the boat she trained on for Sail Door County, and eventually she found one in an auction in Chicago.

The boats have a cult-like following – they’re sort of the VW bus of the boat world. Whitney said she found the boat’s history fascinating.

“It’s a racing boat,” she said. “Most boats before this kind were full keel. This has a thin keel, so it’s a really narrow keel. And it’s kind of like a surfboard – flat and forward, so it cuts through waves. It was designed for the Transpac [Transpacific Yacht Race], which is from California to Hawaii.”

The first model was built in 1963, and Whitney’s boat is a 1966 model. The previous owner had started renovations but never completed them, and left few records. She had inherited a giant puzzle, but her joy of discovery and sense of independence is essential to her quest to ultimately sail the world.

“I bought the boat in December, the boat came in February, and that was two months of, ‘What did I do? What did I get myself into?’” Whitney said. “Bite by bite, you have to learn one system at a time, and really get your engineer cap on, and take everything apart and put it back together yourself. It will teach you everything about your boat. There have been plenty of times when I’m not strong enough, and I just have a beer, think on it, and the next day I come back, look at it, and I can figure it out.”

Whitney has done a lot of the work solo, but many people have helped along the way. Thankfully a lot of the old sailors are still around the area and took to helping her, including a couple who joined her at the Viking Grill to review the survey of the boat – basically, an inspection report – and came up with a plan.

Three years later, she’s still working on the boat and renovating it as she can, but it hasn’t been easy.

“Yacht Works has been a huge help, but it’s all guys, and of course they chuckled when I bought a puzzle,” she said.

But Whitney has gradually earned their respect as she’s carried out her project.

“It was really gratifying just to hear that I’m living up to the standards of the yard,” she said.

When she’s not on the boat, Whitney continues to pursue her art.

“I bought a boat, intending to sail around the world, but it became more of an anchor here because of all the projects that I had to do,” she said.  It also introduced her to a community, particularly in the arts. She has now intertwined her passions, using old sails as canvases on which to paint, and she’s been encouraged in her work by Barb Lundquist, who let her create a studio on her property.

“Barb is a strong female mentor that I look up to, and she’s one of the reasons I’ve taken art more seriously in recent years,” Whitney said.

In 2020, she entered a portrait of Barb’s husband, Lyle, in the Door Prize for Portraiture show at the Chez Cheryl Artspace, and she works part time at The Lightbox, where she sells silk-screen prints.

Sailing, like art, is often viewed as the territory of those with money. Whitney wasn’t born into money, but she was born with a sense of adventure that has led her to and through many growth opportunities. And she’s proven that in sailing as in life, you just need tenacity and a zest for reading the wind and weather.