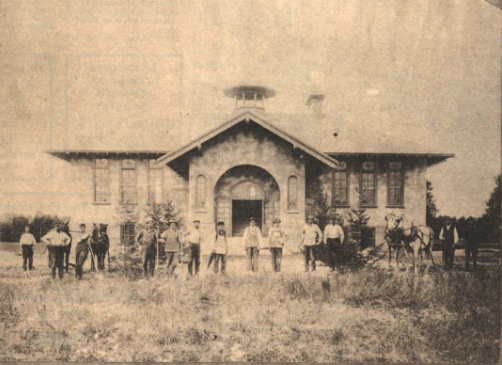 Gibraltar High School is celebrating its 100th anniversary this year. But like most high schools that, in the beginning, served communities that were primarily rural, Gibraltar didn’t just spring into life with no backstory. Its existence was preceded by 70 years of little independent schools that dotted the countryside.

In northern Door County, the earliest schools were built on Washington Island in 1848, in Ephraim and on Chambers Island in 1854, in the Town of Gibraltar in 1857, in Baileys Harbor in 1858 and another in Ephraim in 1859. In 1862, when the number of rural schools in the county had grown to 29, Milton Lyman was hired as the county’s first school superintendent at an annual salary of $350.

Nyla Wickman Small, assistant curator at the Door County Historical Museum and herself a product of a rural school, has gathered extensive information about the 25 rural schools in northern Door County that were eventually consolidated into the Gibraltar District.

By 1913, there were 66 country schools in the county, 25 of them in Northern Door. Typically, these early schools were one-room log buildings with rough boards for students to sit on and few windows because glass was expensive. School terms varied in length from three months, the legal minimum, to six or seven months. In these farming communities, planting and harvest seasons and weather conditions determined whether the term included three consecutive months or was spread over a longer time. Most parents valued education and were eager for their children to attend school, but the childhood illnesses that were so common then and the need for older students to help with work on the farm often contributed to poor attendance. By 1901, the law required schools to separate students by grade, replacing the previous practice of grouping all ages together.

In order to graduate from eighth grade, students attending rural schools had to take final exams in 11 subjects. A commencement ceremony for all rural-school eighth-grade students who passed the exam was held at the old Sturgeon Bay High School. Small, who graduated in 1956, recalled that after the ceremony the students all marched down to St. Joseph’s Catholic Church to have their picture taken on the front steps, then were treated to a movie.

By 1882, Sturgeon Bay had established the county’s first four-year high school. Washington Island opened a private high school in 1919, and the Sevastapol Consolidated School District offered grades one through 12 in 1924.

By 1918, residents of both Baileys Harbor and Gibraltar (Fish Creek) were eager to build a four-year high school that would serve the entire Northern Door student population. Local newspapers reported that the desire for higher education was so intense that discussion of it even surpassed talk about World War I. Citizens of both towns voted overwhelmingly to create a new school, but the state would not allow two high schools so close together. Having the final decision, the state awarded it to Gibraltar.

The Gibraltar Union Free High School (“free” meaning that students did not have to pay tuition) originally served the Gibraltar and Ephraim districts. In 1919, there were 38 students in the first classes, two teachers and three graduates — Harold Wilson, Helen Schancer and Harold Chambers.

Recess at Appleport School outside Sister Bay in 1940. The school is now an artist's studio. Submitted.

Ephraim School. The building was later used for kindergarten classes, and is now the Ephraim Village offices. Submitted.

Gibraltar High School viewed from the air with the addition of what is now called the Old Gym. Submitted.

The last class at Baileys Harbor School in 1980. Submitted. The school is now home to Orphan Annie's Bed and Breakfast.

The building had four classrooms upstairs and a lower level that housed the furnace, a small library, a business-education room, bathrooms and a tiny office for the principal. (Rutherford said you had to slide behind the furnace to reach it.)

There were no buses in the beginning, so students who didn’t live close enough to walk to school took a room at the Barringer Hotel or stayed with friends in Fish Creek.

Sister Bay was annexed to the high school district in 1929 and Liberty Grove in 1935. In 1934, a separate building was added for agriculture and shop classes.

A Quonset hut was purchased in the late 1930s for use as a music classroom and, for reasons unknown, was placed a long way behind the school. Rutherford, a 1939 graduate, remembers freezing on her way to music classes in the winter.

The gym — still in use today — was ready for commencement ceremonies in 1936.

Les Berns, who grew up in Sister Bay, was born in 1918, the year the original high school was built. As he turns 100, his memories are as sharp now as they were in 1936, when he graduated from Gibraltar High School. He remembers it as a wonderful, graceful building that resembled the old Sunny Point School that still stands across from Sunnypoint Gardens on Highway 42.

Berns was just 14 when he enrolled in the high school, but his father let him use the family’s Hudson Super 6 coach to drive himself and several friends from Sister Bay to Fish Creek. Berns recalls that it was a little tricky during the winter, especially steering clear of the 10-foot drop-off on the Little Sister Hill curve! The most exciting time, though, was when the gear shift broke off at the floor while the car was in reverse, so Berns had to back up quite a distance to reach a garage.

Because there was no gym until after Berns’ class graduated, the basketball teams practiced and played their games at a dance hall in Egg Harbor. He discovered a “springy spot” in a corner of the dance floor that, if hit just right, added at least a foot to his jump shot, perhaps helping Gibraltar win two of its three 1935 – 36 games — a better record than the football team managed that year, winning zero and tying two. The dance hall had no heat, so fans who attended the games kept their coats on.

Even though Berns didn’t live on a farm, he enjoyed the ag classes taught by Pinky Rose. As summer projects, Berns raised green beans and a pig — far back in the backyard. He remembers the whey-fed animal as the greatest-looking pig ever. During an animal-judging trip to Madison, the ag boys short-sheeted Rose’s bed while Rose was out with his girlfriend.

Berns learned to play the clarinet at Gibraltar High School from Dorothy Brenner, who had played first clarinet in a Sousa band and taught about 50 students in the high school band. He recalls a rainy marching competition in Hortonville during which the band members’ 100-percent-wool uniform sweaters stretched until the ribbed bottoms were at their knees, and the students smelled “like a herd of goats.”

When Mabel Leeder Peterson started first grade in 1932, there were 50 students at Appleport School. When she finished eighth grade, there were just 20. (During the Depression years, families who rented farm land moved often. Since rural schools were close together, even a move of a mile or two could result in a change of schools.) Mabel recalls what a shock it was to ride to Gibraltar High School in a little, yellow bus driven by Irwin Bastion. It had no seats, just long benches.

She returned to the high school in 1972 as a cook and later worked as a library clerk with Miriam Erickson, who set up the first school library in the state to use barcodes.

Peterson’s family holds the distinction of having four generations of Gibraltar High School graduates: Mabel in 1945, daughter Winnie Peterson Jackson in 1965, grandson Christopher Jackson in 1994 and great-granddaughter Brianna Jackson in 2015.

Virginia Reimer Hanson, a 1953 Gibraltar graduate, was in the first class to graduate from the “new” high school. The ag and music buildings had been razed so that the new building could be erected around the gym. Students and teachers spent a day carrying books and equipment from the old building to the new one. The original high school, then 35 years old, was demolished that summer.

Several years before she retired as the director of the high school’s media center, Roberta Champeau began digitizing yearbooks dating back to the first one: the 1919 Gibraltar Gems, when the school’s mascot was the Gibraltar Eskimo. She’s currently working on books from the 1960s, which will be available on the school’s website in the fall, and she plans to continue her digitizing work after that.

The 1919 edition pictured class officers, the three-man school board, two teachers and a female principal, who looked as though she took her position very seriously.

Photos of the members of both boys’ and girls’ sports teams appeared in the yearbook by 1920. Music had been an important part of the curriculum from the beginning, and photos of band and choir concerts and smaller instrumental and vocal groups appeared prominently in the yearbooks. The 1924 yearbook, appearing after a two-year absence, was named The Rock, inspired by Gibraltar Bluff.

A picture of a 1926 sewing class shows a class of young women working on hand-sewn projects.

Members of an FFA chapter were pictured in 1938.

During the World War II years, the yearbook’s pages included photos of young men in the armed services. The 1948 annual was dedicated to bus drivers and their importance in such a far-flung district. Homecoming pictures began to appear in the early 1950s, along with images of sock hops and proms.

Since 1982, Gibraltar’s K – 12 students have benefited from activities sponsored by Friends of Gibraltar (FOG), a nonprofit organization that arranges educational opportunities in support of the arts.

As Gibraltar High School prepares to mark its 100th anniversary, FOG will, of course, be an important part of the yearlong celebration. FOG project coordinator Vinni Chomeau says all art departments, K – 12, will work on a mural for the cafeteria; a 2018 – 19 time capsule will be buried on the school grounds; and plans for a combination outdoor classroom and lunch seating area dedicated to alumni are nearing finalization.

Kärin Kopischke, a nationally known costume designer, is preparing 10 life-size silhouettes: one for each decade of the high school’s history. Students will use photos from old yearbooks to create permanent collages inside the silhouettes. Charlie Eckhardt, the Gibraltar band director, is composing a song to premiere at a community event in the spring of 2019. Joel Blahnik, a former school band director, is writing the lyrics.

As part of an ongoing FOG project, middle school and high school students have been videotaping interviews with Gibraltar alumni, current students and teachers to add more depth and detail to the district’s history. A video including highlights of the interviews will be featured in centennial activities. Alumni, former teachers and local residents who would like to be interviewed may contact Chomeau at 920.868.3284, Ext. 205.

As friends and fans of Gibraltar High School reflect on and celebrate its first century, current and future students will create their own memories as they launch its next century.