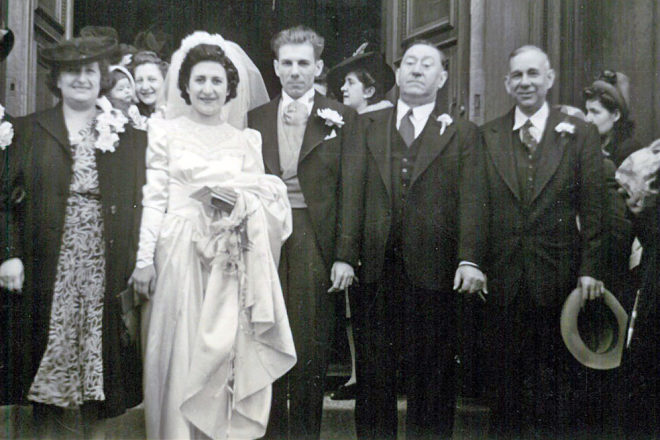 The October 1942 wedding of Mike Candioto and Ursula “Rose” Sparduo at Our Lady of Sorrows Church in Chicago. Submitted photo.

He wasn’t born in a log cabin, but spent much of his childhood in one. When he was 12, he cruised Baileys Harbor in a 1919 Dodge, with lots of pillows under and behind him so he could look through the steering wheel to see where he was going. (“I’d get two wheels in the ruts, and off I’d go,” he recalls.)

He invented a garage door opener, a clothes dryer and an answering machine. (And two of the three worked!) His father had married into the colorful Faust clan, founded in 1882 on 140 acres near Kangaroo Lake. Last spring, at 101, Myron “Mike” Candioto had a successful corneal transplant – indicative of both bravery and optimism. 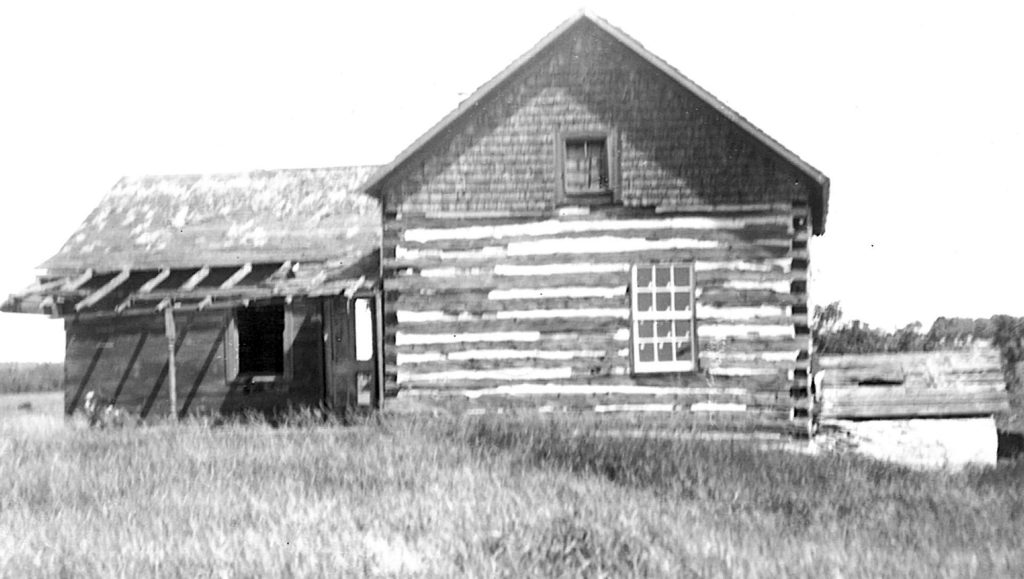 Born at home in Chicago on June 7, 1915, Mike attended St. Matthias Elementary School and St. Georges High School, but had to drop out in the middle of his junior year to help support his family. His parents, Myron “Frank” Candioto, repaired sewing machines in the millinery industry and his mother, Katherine Faust Candioto, made hats.

As very young children, Mike and his three younger sisters, Betty, Helen and Katie, were introduced to The Farm, the Faust homeplace on what is now Summit Road near the causeway over Kangaroo Lake. When the “big house” overflowed with cousins – even with children sleeping crosswise, four to a bed – the Candioto family summered in the old log cabin that came with the property in 1882.

Their grandfather, Conrad Faust, came from minor nobility in Germany. (The founder of the clan in the 1400s was Johannes Faust, a very wealthy man who financed Gutenburg’s invention of the printing press with a loan of 1,600 guilders.) Their descendants were told that their grandmother, Elizabeth Emerich Martin, was not of the same social class, so the couple had to come to America to marry. Conrad later returned to Germany to receive his inheritance, a trip that took nearly a year. He came home in 1889 with wonderful gifts for the family and “enough money to last the rest of his life.”

Mike remembers his grandfather as a man with a German accent, a beard, a pipe, very erect posture and the ability to walk for miles. He was one of the founders of the German settlement and helped to clear land for the town cemetery, for which he was given seven lots for himself, Elizabeth and each of their five daughters. He was a truck farmer and had a large cranberry bog near the lake that was flooded when the dam was built at the south end of the lake in 1937. Mike remembers that his grandfather was very upset when his cranberry business was wiped out.

He also remembers Baileys Harbor as a nice quiet place when he was a little boy.

Sometimes his family came by train from Chicago to Sturgeon Bay and sometimes made the two-day trip in that 1919 Dodge that went 35 miles per hour. He and his sisters walked to town every other day and made friends with the Anclams and the Zahns, whose father was the town blacksmith. He remembers Voecks Grocery Store, picking cherries for $12 or $14 a season and Saturday baths in Kangaroo Lake. They walked to Schram’s Hall to watch movies on Sundays and to Wasserbach’s Ice Cream Parlor for a banana split or a Three Graces, an ice cream sundae. 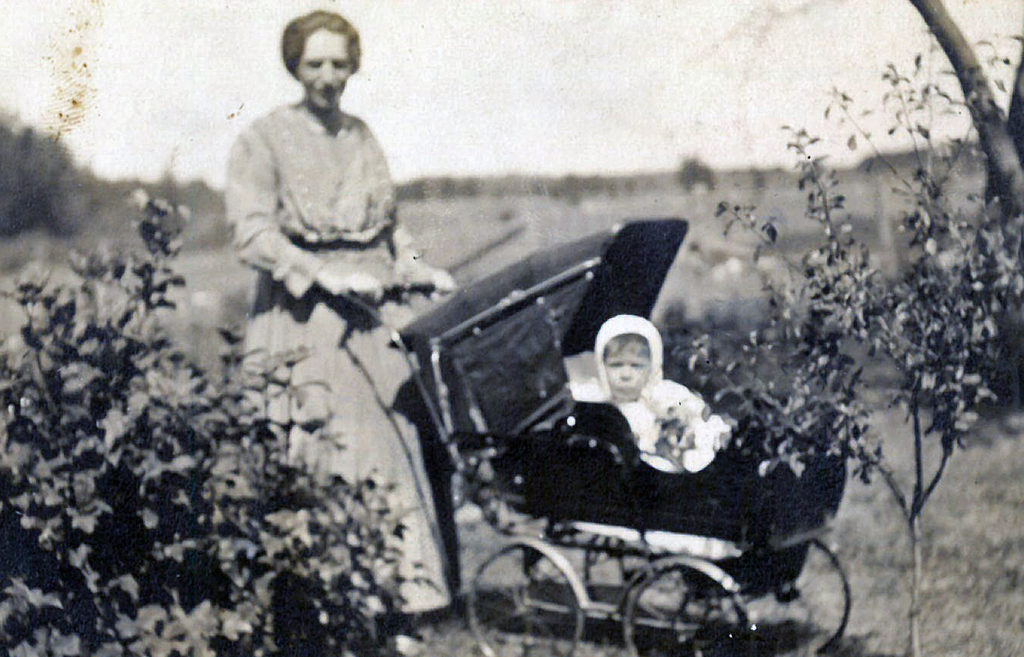 His grandparents’ home had no running water or electricity until the mid-’40s, and the electricity, when it was installed, was a little quirky. Everyone knew you couldn’t flush the toilet and make toast at the same time without blowing a fuse. In the winter, Grandma raised chickens in one of the upstairs bedrooms. And the toilet became the insurance adjuster’s first ever “blowup” when lightning struck it.

When Carol Thelen Schmidt, the current owner of the original farmhouse, remodeled it in the late 1990s, she stripped 25 pounds of paint from the walls of one bedroom. Underneath, she found newspapers dating to 1862. One issue noted that Hans Christian Andersen would soon be visiting the United States.

When Mike left school and began work in the early 1930s, his long summers at the farm came to an end. He was first hired as a handyman with Lepman Brothers millinery factory, but, like his dad, he soon proved to be adept at repairing the British-made, bobbin-less sewing machines used in that industry. Always a mentor to his three younger sisters, Betty, Helen and Katie, his salary enabled him to pay the tuition for all of them to graduate from a private Catholic high school.

His mechanical skill expanded to all aspects of his life. “He could fix anything,” his daughter, Ginny Siegel, said. “We never, ever had a repairman. When we moved into a house with an oil furnace, he decided he’d rather have gas heat, so he spent all summer cutting up the boiler, then getting a book from the library to learn how to install the ductwork and assemble the new furnace, that came in pieces. It was late October before he completed it, and we were getting a little chilly, but when he fired it up, it worked just fine.”

Like his father, Mike met his future wife, Ursula “Rose” Sparduto, when he was repairing a sewing machine in the hat factory where she worked. They were married in October 1942 at Our Lady of Sorrows Church in Chicago. At 101, he still remembers walking her home from work – he says it was “on his way” – and taking her to eat at fast food joints. “I was never a big spender,” he says. (Ginny and her brother, Mike, say that’s an understatement!) In 1939, Mike purchased a brand new DeSoto for $750 cash. His children swear it was the only new car he ever owned. “He was so good at making repairs,” Ginny recalls, “that he kept them running forever.” 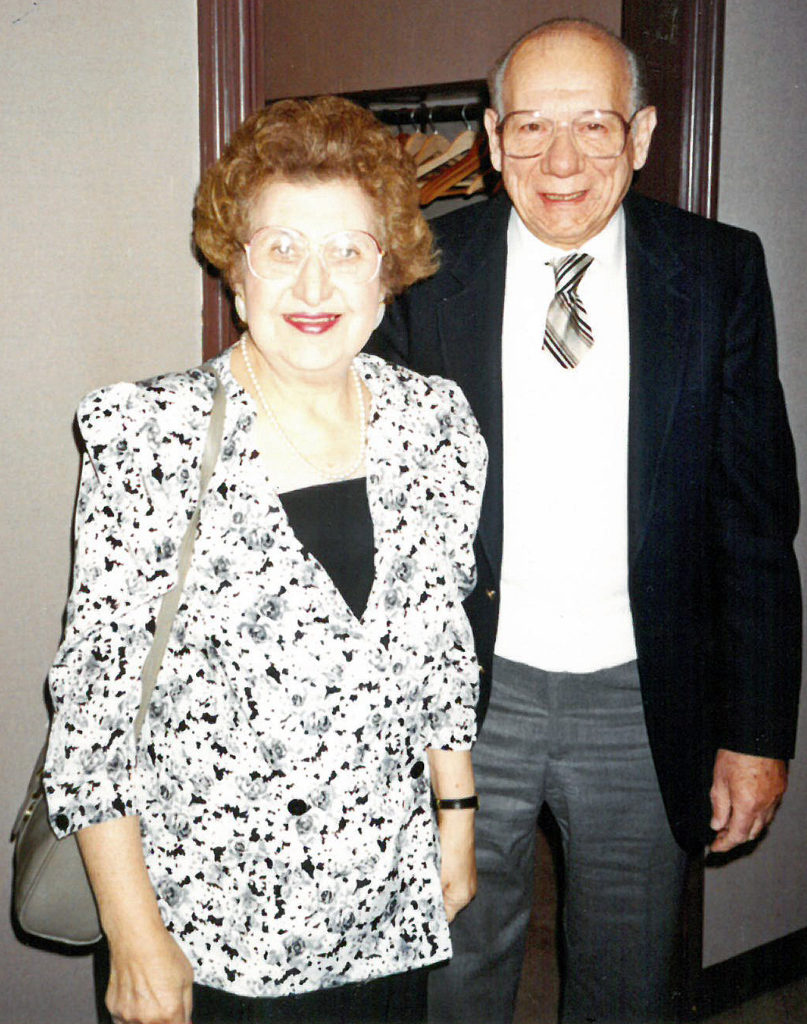 During World War II, Mike worked in a Chicago factory that made parts for plane engines. After the war, he worked for Foote Brothers on the south side of Chicago, still repairing sewing machines for the millinery business. When hats went out of fashion, he switched to repairing industrial machines for making tents. By this time his dad owned three millinery shops with production in the back and the sales floor in front. They were located in the area where the Sears Tower now stands, on Lincoln Square and on Michigan Avenue. In 1962, Mike went to work for Montgomery Ward’s security department and retired 18 years later as head of the night security staff.

He and Rose became avid square dancers as part of a group at their church. When they traveled to Europe, they danced with groups in towns they visited. Rose died in 1999 at age 87, shortly after the couple had moved into a retirement home. When his car refused to start one day in 2007, his children (which includes oldest son, Frank, as well as Ginny and Mike) felt that 92 was a reasonable age for him to stop driving. A short time later, he happened to mention getting a new license for the car. He’d thought about how to repair it, got a jump from a friend and was off. “How can you say no to a 92-year-old man who repairs his own car and is ready to go again?” said Ginny. Mike finally hung up his car keys for good at age 93.

That was eight years ago, and Mike Candioto is still going at 101. In May, he moved into an assisted-living facility in Schaumburg. His voice and his handshake could belong to a man half his age. The corneal transplant last spring – he was the surgeon’s oldest patient ever – is healing beautifully. For his most recent birthday celebration, the Candioto “birthday board,” that has holes for 110 candles, created quite a blaze.

Oh, and that log cabin where Mike spent so many childhood summers? In 1946, his aunt, Louise Smith, had it torn down and replaced with a house built from stones picked on the farm. Today it’s the home of Jody Jessup and her husband, Fred “Doc” Heide, and it rests on the same three-foot-wide stone foundation that held up the log cabin for no one knows how long.