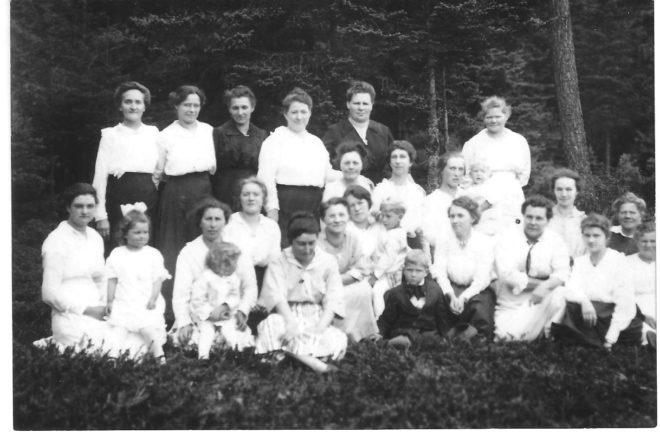 When Kriss Schorer, a third-generation member of the Baileys Harbor Women’s Club, arrived at a meeting of the Baileys Harbor Historical Society to give a presentation about the 106-year history of the women’s club, she was accessorized in a manner that her mother and grandmother would have approved of: wearing a fashionable hat, white gloves and a dainty handkerchief.

The women of the town had been discussing things they thought needed attention, so on Feb. 13, 1913, 15 of them gathered at the Etaugh home to establish the Ladies Improvement Club (LIC). By May 4, the group had 28 dues-paying members. A committee of three chose the topics for programs, which were not to exceed 15 minutes. Dues were 25¢ per month, and the hostess was expected to serve sandwiches, cheese, pickles, coffee and two kinds of cake. The members charged an additional nickel for each small child who attended.

The members first turned their attention to maintaining the neglected town cemetery. John Apple earned $2 per day for the job, with a tub and wheelbarrow provided. A fence was installed for $150 to keep out wandering livestock. The first bazaar in 1916 produced a profit of $147.27 (the equivalent of $3,592.14 today!). It took some doing to arrange enough carriages to visit the Fish Creek Women’s Club. By 1918, the LIC was regularly buying bonds for the war effort and sending money to the Red Cross.

The next major projects were funding bathhouse construction at the Baileys Harbor (Anclam’s) beach and acquiring a gas streetlight, which was first located at Art Wilson’s garage, then moved to Mrs. Blakefield’s corner. (Apparently, it was moved around town so everyone could experience its benefits.) The LIC paid for the light’s gas.

In 1919, the town’s focus was on the need to oil the streets, and a request was sent to the town board. In 1921, the club purchased flags, bunting and other finery to decorate the cemetery on Decoration Day, and this became an annual event. The 1922 project was constructing a grandstand at the ball diamond. Materials cost $23.30, and town men provided the labor. The LIC finally took responsibility for oiling the streets into their own hands at a cost of $79.56. Four years later, the streets needed oiling again, but this time, club members asked townspeople to contribute to the cost. The club employed Frank Oldenberg to make signs to place at the main entrances to the town and on County F.

In 1926, an LIC committee produced a brochure to promote Baileys Harbor, and the Land-O-Lakes Company printed it. The need for streetlights was again discussed, and the LIC agreed to pay $300 a year for three years to support the project. The order was placed, but the power company refused to accept it because a woman had signed it. The company said that a “man in authority” was required as a co-signer.

When Baileys Harbor needed a phone book, the LIC oversaw the printing of 3,000 copies. In 1930, it sponsored a dance to support Paint Up, Clean Up Week, which became an annual activity, as did providing Christmas gift baskets to families in need. In 1933, members wrote letters to national officials to urge them to keep the Coast Guard Station in Baileys Harbor open. In 1934, the club donated $200 toward the purchase of a new fire engine, and on behalf of the beach, the LIC held a potluck and cleanup day, secured chemical toilets for the bathhouse and hired a beach caretaker.

In 1937, the club received a thank-you from Albert Fuller for its efforts to preserve The Ridges Sanctuary. With money from the estate of Michael McArdle, the club purchased dishes, silverware, glassware, long tables and chairs for the town hall, which were used for the first time on Aug. 21, 1928, at the dedication of the town hall and library, also funded by McArdle. The LIC served 150 meals after the ceremony.

On May 22, 1941, the organization changed its name to the Baileys Harbor Women’s Club (BHWC) and was asked to host the June 4-5 convention of the 8th District Women’s Club. With less than two weeks to prepare, the members arranged programs, entertainment, dinners, a tea and housing for guests. The club sent personalized Christmas boxes to local boys in military service, donated to the Red Cross and Bomber Fund, rolled bandages, hemmed bedpan covers and made pajama tops for the Red Cross.

In 1944, the club established a recreation area for young people at the town hall and held a card party to raise money to sponsor activities there. It also raised funds for the ice-skating rink at Brann Park, the kitchen at the town hall and the new hospital in Sturgeon Bay. More than 120 exhibitors participated in a hobby show at the town hall, sponsored by the BHWC in the 1950s. Its cookbooks sold for $1.25 each, and the club bought 12 atomic-bomb instruction books for the community.

In 1954, the club pledged $625 toward the purchase of the Baileys Harbor Yacht Club, with the town to take ownership of it as Anclam Park. Prizes were offered for the best outdoor Christmas decorations. The BHWC held a 1962 tea for girls graduating from Gibraltar and their mothers. Eighth-grade graduates were treated to a pizza party in 1968. And, for the first time, the club sold strawberry sundaes on July 4, earning $97.29. In 1969, it paid for 5,000 copies of a map of Baileys Harbor.

During the 1970s, when St. Mary’s Church was short of bell ringers, club members helped out. The club contributed to installing tennis courts and to new bleachers at the ballpark. In the early ’80s, it donated $1,000 to help move the library from the town hall to the schoolhouse building. All the cookbooks were sold, earning the club $6,764, and 1,000 more were printed at the new price of $9.95 per copy. The BHWC bought drapes for the stage at the town hall and donated $500 to The Ridges. In 1987, strawberry shortcake – the official start of the club’s July 4 Strawberry Festival – brought in $527.07. The next year, each member was asked to supply two dozen baking-powder biscuits for the festival.

By the early 1990s, the club had 91 members. The BHWC donated $1,500 to the fire department for new equipment and $1,500 to The Ridges for lighthouse repairs. The town agreed to take over maintenance of Anclam Park, and the town board assumed kitchen management at the town hall. The club pledged $1,500 to the new YMCA in Fish Creek.

In 2004, the club presented two $500 scholarships – the first of many – to Gibraltar graduates. In 2006, the Strawberry Festival and Cookie Sale netted $2,260.65. Three scholarships totaling $3,500 were awarded in 2008. In 2009, the club held a “hulling party” before the Strawberry Festival. Members made soup bowls for the soup fundraiser at Peninsula School of Art. Club members also sorted lights for community Christmas trees and bought 40 cord organizers.

In 2013, the BHWC celebrated its 100th birthday and gave $400 toward the cost of the Baileys Harbor mural. Strawberry hulling set a world record – one hour! – which members topped three years later by doing it in 45 minutes. The club allocated $700 to purchase Christmas gifts for a family of seven.

During the past 106 years, members of the Baileys Harbor Women’s Club have contributed their time, effort and money to hundreds of organizations, projects and activities and have awarded more than $21,000 in scholarships to Gibraltar graduates. As the old saying goes, “If you need something done, ask a busy woman!”