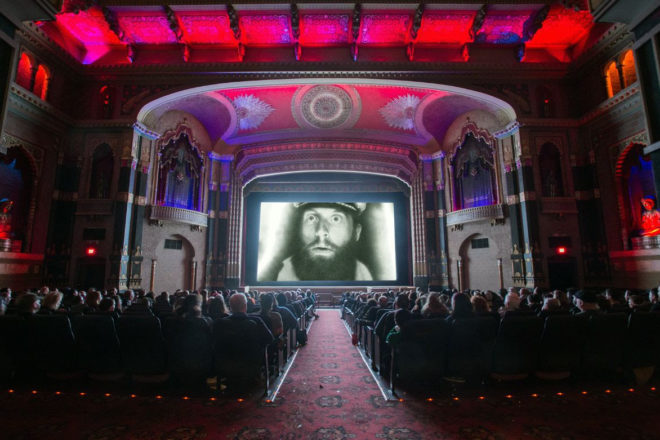 A screening of the Friday feature film, “Lake Michigan Monster.”

A documentary about traditional cowboy music. A story of three witch sisters who contend with time travel. A doctor’s first day on the job at a small, rural family practice.

These are just three of the more than 20 films to be screened at the 10th annual Door County Short Film Fest (DCSFF), running Friday, Feb. 15, and Saturday, Feb. 16, at the Sister Bay Village Hall.

Films are as short as two minutes and as long as 20 minutes, all produced by amateur and professional movie-makers. The fest includes films that were created across the United States and internationally. Dutch filmmaker Nils Bourgonje, the winner of last year’s Juried Golden Mug Award, entered his film Skógafoss in this year’s fest. In the film, a man is on vacation with his girlfriend when he receives a call from his mother in a troubled mental state. The film details their complex relationship.

On Saturday, short films grouped into four sessions will play from 2 to 8 pm. Doors will open at 1 pm. During the intermissions, several filmmakers will discuss their movies, production processes and movie-making techniques, and they’ll answer audience questions.

“Cheers to 10 years!” said DCSFF Executive Director Chris Opper. “The fact that this is our 10th annual event is incredible. When I look back, I think the reason for our survival and success is our continued experimentation and the resulting evolution we go through each year, but we also have a great team of volunteers. The combination of hard-to-find great short films, a low ticket price, excellent free popcorn and drinks and food from a few of our really good local restaurants has been a powerful draw on a winter weekend.”

In a special encore presentation, sponsored by Door County North, The Best of the 10th Annual Festival will be shown April 19-20 at Mink River Basin in Ellison Bay.