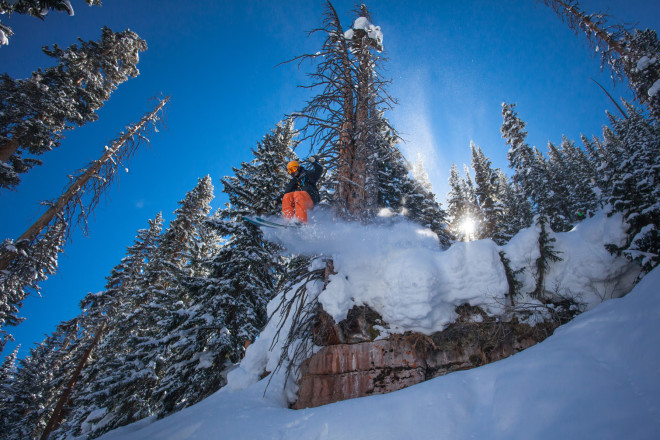 He lists his addresses as Vail, Colo., and Door County, Wis., but when I first met Stewart Birmingham, he was a Gibraltar High School Ski and Snowboard Club member, taking part in one of the many ski trips I coordinated for youths.

But he was never an ordinary skier. He was the one doing backflips off the jumps at Norway, Mich., much to the horror of the Norway Mountain Ski Patrol. He and pal Chris Miller would be “hucking” off of the cliffs at Marquette Mountain, an entertaining sight to be sure. So it wasn’t a surprise when he moved to Vail to live the ski bum life.

Stewart, as well as several other Door County natives, including Chris Miller, Ryan Qualkinbush and Phoebe Guenzel, to name a few, return or stay in Vail every year now.

Working as a ski technician, Birmingham can tune up skis and snowboards in the evening, and head off in the morning to get the fresh snow – the “pow,” the “stash.”

I have experienced these things, too, but not in the way that Stewart does.

In one of my visits to Vail, I peered up at what is known as the East Vail Chutes. They appear as long, steep avalanche-looking trails between the trees and cliffs of the mountains east of Vail Mountain. Stewart uses them as the road to his home in East Vail.

While I was there, a longtime local Vail youth was killed in an avalanche on those chutes. But Birmingham takes no chances. First of all, he is a strong skier, and most of all, a smart one. He “knows the snow,” so to speak. In fact, he is now in the business of “knowing the snow.”

This business, for lack of a better term, is Helicopter Skiing, commonly referred to as heli-skiing.

It takes place deep in the untouched backcountry, accessible only by helicopter on steep, mountainous terrain. Heli-skiing raises the bar very high for skiers; it’s available only to those expert skiers who are strong, skilled and prepared enough to be set down on the top of steep mountain peaks, “no fall zone” avalanche terrain, without the comforts that inbound skiing offers.

Stewart’s fiancé, Abbie Turner, won a trip for two to Points North Heli-Adventures in 2014. She and Stewart went on the trip, skied the virgin steep terrain, and the fire was lit under Stewart to pursue his dream job. He talked about it with his parents, Tom and Linda Birmingham, and asked them for their wise advice. Tom told his son, “If this is what you really want to do, do it. Do it now, or the opportunity may be gone.”

Stewart took his parents’ advice to heart, and applied for a guide training program with Points North Heli-Adventures. He spent the majority of the fall and early winter studying for his medical and avalanche certifications in preparation for his guide training.

After training with Ruby Mountain Helicopter Skiing and Points North Heli-Adventures, he is now fully certified as a heli-ski guide with the U.S. Heli-Ski Association. He is also certified as a Wilderness First Responder and is pursuing further medical and avalanche certifications in the upcoming winter season. 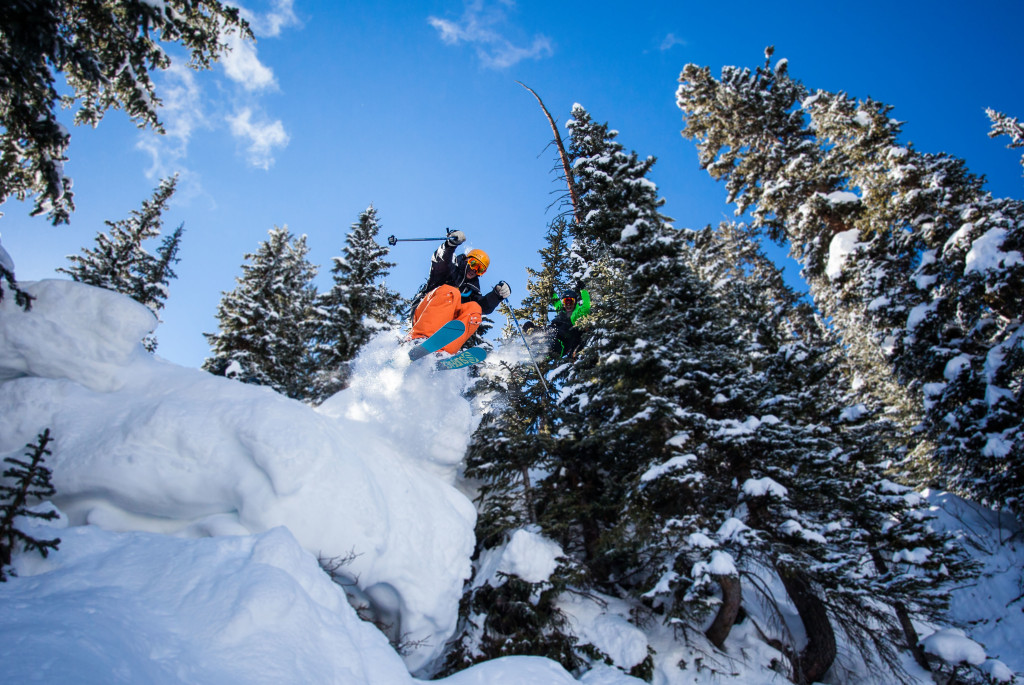 In order to envision the intense, remote, unpredictable and possibly dangerous environment in which this sort of work takes place, one must know about the amount of schooling, training and certification required to do what Stewart does. He is required to have a minimum 80-hour Wilderness First Responder certification as well as an AIARE Avalanche Level 1 & 2 certifications. They are constantly working in unstable avalanche terrain.

In Stewart’s words, “There is rarely a moment that my group and I are not in danger of avalanches, so being able to read the snowpack and know what’s going on down there is paramount to safety and hazard mitigation. I am pursuing my AIARE Avalanche Level 3 certification this year, which is the highest level of avalanche forecasting certifications out there. It is a weeklong exam and I have been studying every day to be ready. I will also be taking my AIARE Level 1 Instructor Training Course, which will enable me to be an instructor for those seeking the most important and comprehensive avalanche awareness skills in weekend-long Avalanche Level 1 courses.”

Birmingham notes that rope skills are a must as well. This winter he took several technical rope systems and high angle rescue courses, and most importantly crevasse rescue training. The Chugach Mountains are surrounded by glaciers, so being on top of your crevasse rescue protocols is extremely important as anyone could fall into an unseen “hole” at any point of the trip. Growing up in Door County never allowed him for much climbing experience, so Stew put in lots of time this past winter getting his climbing skills up to par.

As Birmingham explains, “The obvious requirement is being able to ski ‘like a boss’ in every type of condition without falling. Training to be a guide for groups of four or five other expert world-class skiers means I have to be 100 percent on top of my game and be able to ski anything and everything in proper form. These people are trusting their lives in my hands, so if I am not completely on point it jeopardizes their sense of safety and trust.”

“The Chugach Mountains are looked upon by many of the best skiers in the whole world as some of the steepest, scariest, most extreme terrain out there, so being able to keep your cool and ski it properly is crucial before ever even considering guiding other people in it. Having an acute ‘mountain sense’ is a requirement that must come naturally, as much of the time the slopes are so steep that one cannot see the actual run they are going to ski down. This comes with years of steep backcountry skiing experience and making life or death decisions on the fly in avalanche terrain.”

Planning his ongoing education includes the top-tier avalanche courses, several mountain weather forecasting courses, a geospatial tools for avalanche professionals course, several professional rescue courses, and more technical rope systems. He will also be starting his guide track with the AMGA (American Mountain Guides Association), which is the other gold standard in the world of mountain guiding.

He credits the Points North Heli-Skiing company for opening his eyes up to this whole opportunity, and after becoming friends with the owners and most of the crew there, says that it feels like home to him. He is currently putting his resume together to send out to many operations, but this is the one he is truly aiming to work for. 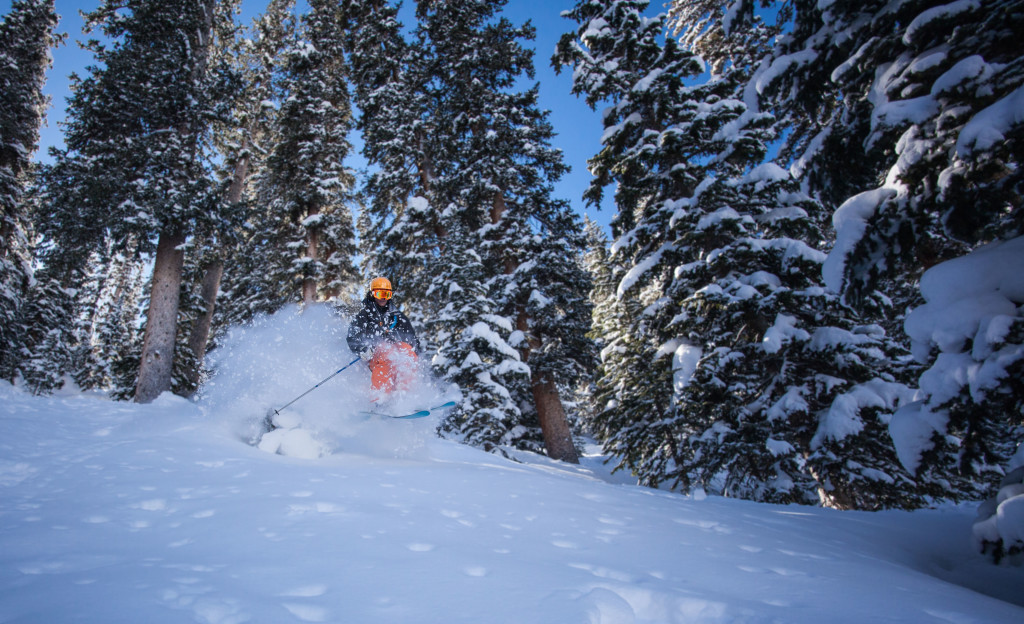 Meanwhile, back at the original address of Door County, how does a helicopter skiing guide stay in top form for the steep terrain and high altitudes? He was recently spotted biking along Settlement Road, pulling his beautiful daughter Treana behind him. He works fulltime in landscaping and as a farmer with Abbie at their Door Blooms Flower Farm on Townline Road in Ephraim.

Stewart notes that in order to stay in shape, he chooses to be constantly active. His summertime occupation choices support this, though the days are often long and grueling. Between fulltime landscaping and farming, he gets a great workout. Keeping his aerobic endurance up is a key factor that he has been working on.

“Lately I have been doing some sport rappelling down many of the bluffs of Door County to keep my rope skills sharp, though this is fairly dangerous due to the poor rock quality and its inherent rockfall dangers. I can recreate crevasse rescue scenarios with a good cliff, some solid anchors, and anything to act as my ‘victim’.”

Home, though, for Birmingham, is where his fiancé and daughter Treana are. They will be staying back when he goes up to Alaska to guide. The heli-skiing season in Alaska is only 10 weeks long due to daylight hours and snowpack, so it will be an eight to 10-week deal for him every winter. They have mutually decided that it is best for them to stay back when he goes up, enabling him to save the most money possible.