The Governor joined faculty, staff, students, lawmakers and community members at UW-Green Bay on Jan. 15 to highlight his college affordability legislative package. This legislation targets ways to make higher education more affordable for Wisconsin’s working families and students. “One of the best things we can do for higher education in our state moving forward is to focus on making college more affordable for Wisconsin’s students and families,” Walker said. “Part of this legislative package focuses on transparency so information, like cost and student loan rates, is provided upfront, enabling students and families to make the financial choices that are best for them. This knowledge will help students make informed decisions, making them more likely to obtain their degree in a timely manner and begin their career.” According to the Legislative Fiscal Bureau, in the 10 years prior to Wisconsin’s current historic four-year tuition freeze, tuition increased an average of 8.1 percent across all UW System universities. During that same period, tuition had gone up 118.7 percent prior to the freeze. The six legislative proposals in the college affordability proposal are focused on making higher education more affordable, reducing student debt, and making the cost of higher education more transparent. 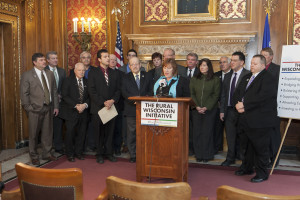 If you are an artist in grades nine through twelve, you are invited to participate in the 2016 Congressional Art Competition. Each spring since 1982, the Congressional Institute has sponsored a nationwide art contest to recognize and encourage artistic talent in high school students. All students in ninth through twelfth grades are invited to submit pieces to Ribble’s office for the competition. All submitted pieces will be shown in a special display at the Neville Public Museum of Brown County, and the winner will be displayed in the U.S. Capitol for a year. For contest regulations and more information, visit ribble.house.gov/serving-you/art-competition or contact his office at 920.380.0061.

Johnson, chairman of the Senate Homeland Security and Governmental Affairs Committee, said this about news of Iran releasing Americans it held captive: “We should celebrate the good news that Iran finally has released five American hostages. But we should not delude ourselves that this represents a significant positive change in the Iranian regime’s behavior. These Americans should never have been held as hostages, and they should have been freed long ago. The mullahs in Iran have been emboldened by the nuclear agreement and are playing this administration like a violin – brazenly test firing ballistic missiles, firing unguided rockets close to the USS Truman, capturing and humiliating American sailors. Now, the regime is releasing a few hostages in anticipation of $100 billion in sanctions relief. I have no idea why anyone would think it is a good idea to allow billions of dollars to flow into the economy and military of our self-proclaimed enemy that behaves so badly. Unfortunately, this administration believes it is.”

Baldwin sent a letter to Governor Scott Walker requesting an update on the Walker Administration’s efforts to transition the approximately 63,000 Wisconsinites that he removed from BadgerCare coverage to coverage in the Affordable Care Act’s (ACA) Health Insurance Marketplace. According to figures released by the Walker Administration in July 2014, almost 27,000 Wisconsinites that Governor Walker kicked off BadgerCare had not yet obtained health coverage and were likely uninsured. “You had promised to use Medicaid and the ACA Marketplace to cut Wisconsin’s uninsured rate in half, however it has been over a year since Wisconsin taxpayers were updated on your plan to transition former BadgerCare recipients to coverage in the federal Marketplace,” Baldwin said. “As such, I ask that you immediately provide the public with another report on how many of these Wisconsinites your Administration has transitioned to date, and how many it has not.” Baldwin stressed that with the Jan. 31st deadline fast approaching for individuals to enroll in private health insurance for 2016 in the ACA Marketplace, it is critical for the public, including Wisconsin enrollment assistors, to know how many former BadgerCare recipients still need to obtain ACA coverage under the Walker plan. Governor Walker’s plan kicked 63,000 Wisconsinites off their BadgerCare coverage, created a coverage gap, rejected a federal investment to expand Wisconsin’s successful BadgerCare program, and exposed Wisconsin taxpayers to higher costs while covering fewer people. Last month, Wisconsin’s nonpartisan Legislative Fiscal Bureau (LFB) released updated projections outlining how the State of Wisconsin could have saved more than $1 billion in taxpayer money in six years by accepting available federal dollars to expand Wisconsin’s BadgerCare program through the Affordable Care Act. According to LFB’s projections, about 83,000 additional Wisconsinites would gain coverage through full expansion of BadgerCare.

In this week’s address, the President spoke about the steps we need to take to modernize our unemployment insurance system. Our country has come a long way in the past seven years, with more than 14 million jobs created, and the unemployment rate cut in half. But, as our economy continues to change, there are still steps we need to take to ensure all Americans have the security and opportunity they deserve. In his address, the President laid out his plan to help more hardworking Americans get unemployment insurance, find a new job, and have some assurance that even if a new job pays less than their old one they will have some help paying the bills. These ideas are part of the President’s broader belief that everybody who works hard deserves their fair shot and the chance to get ahead. A video of the address is available online at whitehouse.gov.