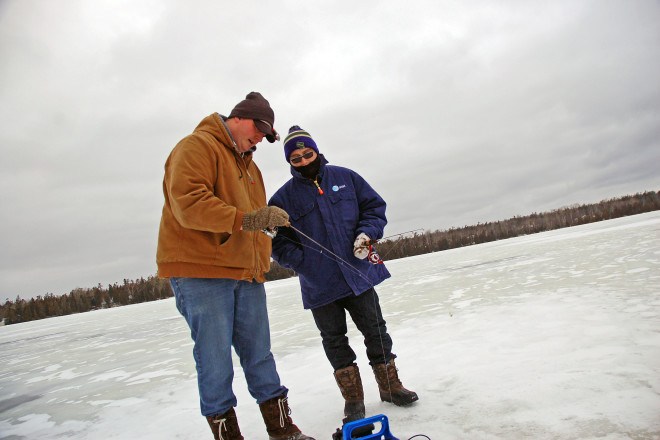 Last weekend was free ice fishing weekend in Wisconsin, meaning anyone could fish without a license. I set out on Saturday in search of hardy ice fisherfolk, convinced that hordes of them would be out there taking advantage of the state’s invitation to fish for free.

I first drove to Kangaroo Lake to see if anyone was fishing there, but with plenty of open water visible on the causeway side, I decided shallow Europe Lake would be a better bet for finding anglers.

The day was steely gray and the northwest wind was bitterly cold blowing across the vast sheet of slippery ice that Europe Lake has become.

Instead of seeing hordes of anglers out on the ice, there was a lone untended ice shanty just offshore of the public access to the lake, although there were many signs that ice anglers had been on the lake with a bunch of iced over, perfectly round holes to be seen. 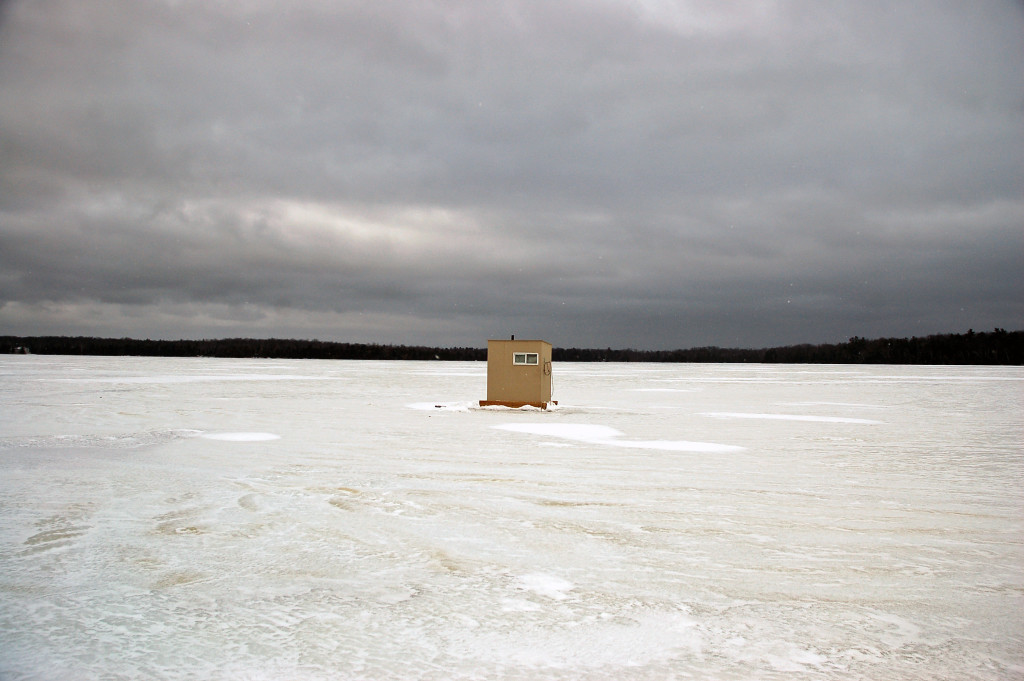 It looked as if everyone was staying indoors the day after a major ice storm hit the area. Just as I was about to head home for a warm beverage, a vehicle pulled into the lot and two men got out and started loading a plastic toboggan with supplies.

I donned my LaCrosse packs and asked the two guys if they minded if I tagged along.

“As long as you don’t mind a long walk,” one of the men said. “We’re heading to the opposite shore.”

No problem, I thought. Not as long as I have my trusty, deep-tread packs on. I’ve had a lot of experience walking in these boots and they’ve never let me down – until now. Ice skates would have been a better conveyance. Only by walking at a snail’s pace was I able to avoid falling on the ice. I came very close to falling once, but somehow managed to plant my right foot firmly before I went down with my camera. I should have packed Yaktrax or cleats, but I did not, so it was very slow going to the far side of the lake. All the way across I wondered, why the far side of the lake?

By the time I finally got out to the two ice fishermen, they were already standing at their separate fishing holes with their small jig rods. 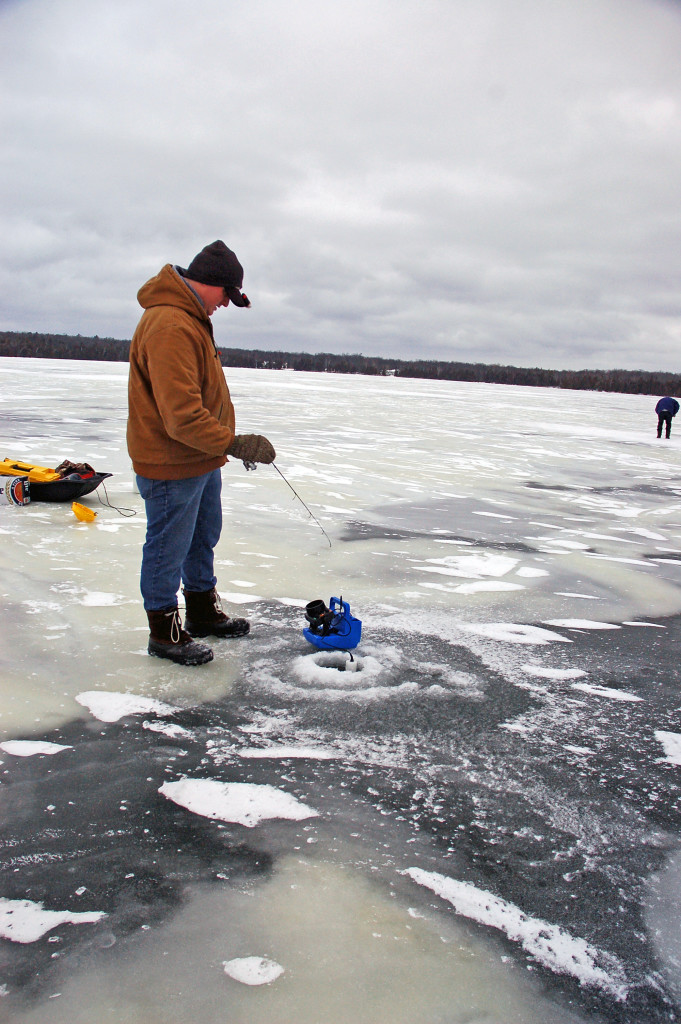 My first question is why the far side of the lake?

“This area is 10 to 12 feet deep,” said Whitefoot. “The rest of the lake is 5 to 7 feet. I just thought the fish might be coming to the one spot that’s a little deeper.”

To the side of his hole, Whitefoot had a blue Vexilar fish finder. Does it help, I asked.

And what kind of fish is he going for?

“I go for anything,” he said. “Jigging like this, I like to catch panfish, bluegill, perch. We’ll put in a couple of tip-ups later to see if we can get bass or northern. I caught one nice smallmouth bass last year. It’s been bringing me back. Haven’t caught much since.”

Whitefoot said he was introduced to ice fishing by his father, and now likes to pass on his knowledge to others, such as his friend, Elger.

But what is the appeal of standing on a slab of ice on a frigid day?

“I like being out here in nature,” Whitefoot said. “This is different. I usually go with a lot of guys, but even then it’s still pretty quiet.”

That was pretty close to Griffin Olson’s response. He’s a Baileys Harbor resident and the owner of the lone shanty on Europe Lake. I left a note and business card for him and he called back. 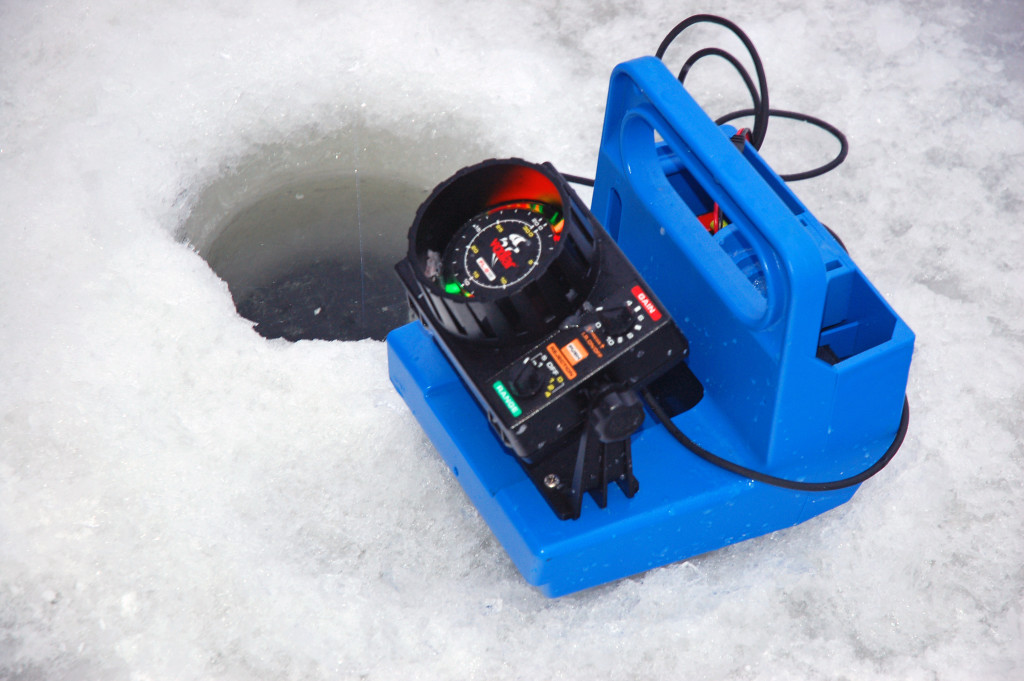 But he added that it’s also about the “adrenaline.”

“You can go and catch fish all summer long just casting in the water,” he said. “This is more of a challenge. Sometimes you’ll catch fish in up to a foot of water. People say you’re crazy, but I’m having fun.”

The shanty is outfitted with all the comforts of home, Olson said, adding that it’s like “fishing in a condo.”

“The other day we went out there and finished hooking everything up,” he said. “We’ve got power lights [with a12-volt battery], radio, wood stove, plenty of storage and pole holders and tip-ups. We’ve really got it made out there. It’s like a home away from home. It’s not the largest inside. It’s big enough for two to three people.”

Olson said he caught the fishing bug from his father, Jay, and grandfather Gene.

“That’s what they raised me on. That’s what got me out there. The more we caught, the more fun I had,” he said.

I asked about being the only shanty out there.

“I believe I was the first permanent shanty out in northern Door County this year,” he said. “There were some guys that had a pop-up out there before me. I was kind of surprised. Me and my dad have been the first ones out there for a couple of years. You don’t see many shanties or too many people fishing on Europe Lake. That’s one of those lakes where if you’re not a good fisherman, you’re not going to catch fish. You’ve really got to have skill and patience.”