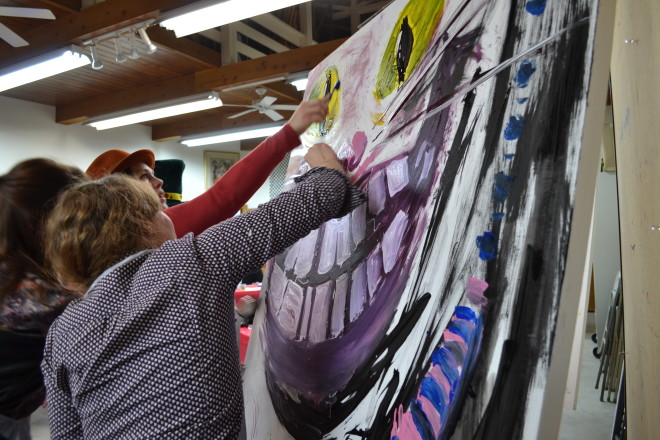 An Art Team paints a large image of the Cheshire Cat during the second round of the competition.

“But I don’t want to go among mad people,” Alice remarked.

It was pure madness at the Peninsula School of Art on Jan. 23 as dozens of attendees donning costumes of the whimsical characters from Alice’s Adventures in Wonderland descended upon the first Mad Hatter’s Ball. Seven art teams competed in madcap, timed events for the highlight of the night, making structures of oversized playing cards, large-scale paintings inspired by the 1865 literary nonsense novel, and steampunk versions of the White Rabbit using hardware scraps and miscellaneous bits. DJ Boll Scribblies (Josh Boll) provided the music as guests nibbled on Wonderland-themed finger foods and adult concoctions. The Mad Hatter’s Ball was the celebratory component of the art school’s first Artists in Wonderland exhibition, featuring small-scale works in a variety of media.

Anne Herring took home the first place Best Costume award for her rendition of the Queen of Hearts.

The festive atmosphere was complete with Wonderland-themed treats.

Steve Stanger as The Mad Hatter.

Heather Klinkhammer brings out her best Queen of Hearts.

Funky hats made with found objects were all the rage at the ball.

An Art Team paints a large image of the Cheshire Cat during the second round of the competition.

Art Teams assemble a range of gadgets and miscellaneous items to assemble a Steampunk version of the White Rabbit.