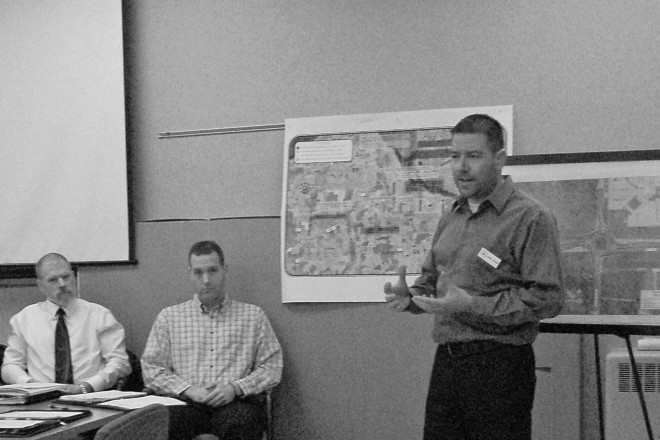 It seemed a cruel effort in futility when Sen. Frank Lasee held a hearing on Sturgeon Bay roundabouts two weeks before the Wisconsin Department of Transportation is about to let bids for the construction work, but about 40 people turned out for the hearing on Jan. 25. Many of those in attendance were elderly, and all but two men in their 80s spoke against the roundabouts.

One of the roundabouts will replace traffic lights at the intersection of Hwy. 42/57 and Michigan Street and the other will be at the highway’s intersection with Egg Harbor Road.

Several people talked about the roundabouts being “a done deal” and that their protestations against the DOT’s proposed improvements would not be heard, but they had been heard at previous public hearings, which begs the question, why hold a hearing at what was described as the 11th hour for the roundabouts?

“I think we wanted to get more input,” Lasee said at the end of the nearly two hour-long meeting. “Give people both the chance to get more explanation and if there’s a possibility of things not being right, to change it, even being the 11th hour. I’m sorry I didn’t host more of these sooner.”

Lasee said it wasn’t an entirely futile gesture to hold the meeting because “sometimes I’ve seen at the 11th hour, you can make changes if something glaring is overlooked,” but added that the DOT “generally do their job properly. Generally.”

Six members of the Northeast Region of DOT were in attendance. Two of them – Traffic Engineer Randy Asman and Project Manager Jeremy Ashauer – did the bulk of the speaking in explaining the project and graciously answering all the anxious questions they have answered in the past regarding roundabouts.

Ashauer explained that the addition of the roundabouts is part of the DOT’s upgrade plan for that entire section of the highway. He said the work will include resurfacing the highway leading up to and away from the Bayview Bridge and all the way up to the roundabouts. Work is scheduled to begin in late March and be completed before the 4th of July weekend. An update of the city’s Alabama Street is also part of the project.

Many in the room seemed surprised when Ashauer said this roundabout plan has been in the works for years, including reaching a 2010 agreement with the city and county.

Former Sturgeon Bay Common Council member John Lodl was in attendance and said he was one of two council members who voted against the roundabout plan in 2010. He said, to approval from the audience, that a better plan would have been two lanes each going north and south, including Bayview Bridge.

Several people asked why the DOT had left Gordon Road out of the plan, which is the first artery north of Egg Harbor Road and the site of Sturgeon Bay’s only traffic fatality in 2015. Several others wondered why the plans did not include a roundabout for the Hwy. 42/57 split. Niles Weborg of Ephraim pointed out that leaving the traffic light there will create long lines and serious frustration on busy weekends.

Ashauer said Gordon Road didn’t have the traffic count to be included as part of the project and the 42/57 split is not in the scope of this project.

Both Ashauer and Asman spent a good amount of the time defending the safety record of roundabouts and the thought DOT staff has put into the design of the Sturgeon Bay roundabouts, trying to accommodate every scenario they could envision with Door County traffic, including pedestrians and bicyclists who also have to maneuver the roundabouts. Ashauer said the crosswalks are designed to capture the attention of drivers.

“We have not seen any issues with pedestrians and roundabouts,” Asman said.

They were also asked several times what happens if it turns out the roundabouts don’t work for Door County. They replied that the DOT has never seen that happen, even in locations with high traffic events, such as Country USA in Oshkosh and the PGA Tournament in Sheboygan. In fact, Asman said, a number of high traffic locations where police details were posted to deal with traffic are now dealt with by roundabouts.

“Law enforcement loves them,” he said.

Several people spoke in favor of traffic lights, and one wag suggested there are some extra ones at Walmart, but Will Dorsey, DOT Northeast Region Director, said traffic lights are more expensive than roundabouts, by about $1.6 million.

That number was a surprise to Lasee.

“I didn’t realize how expensive lights were,” he said after the meeting. “I thought they were more of a low-cost option. That was something I didn’t know, so I learned something from this meeting as well and it makes me more comfortable with this decision.”