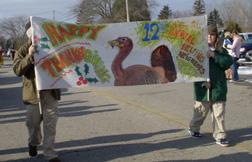 For many families in America, Thanksgiving begins by watching the Macy’s Thanksgiving Day Parade on television, drinking coffee as the kitchen fills with the scent of gravy, stuffing, and turkey. Katie Couric (well, Meredith Vieira these days) and Matt Lauer hunch over a fall bouquet in hat and scarf introducing pop stars that lip-synch their new singles, marching bands from across the country, huge balloons of cartoon characters, and of course, Santa.

In 1997, that tradition – in mini, mini form – came to Door County when local residents Jeri Taylor and Verlin Kiehnau began a Thanksgiving tradition to “break up a day of eating and drinking,” as Taylor puts it, adding “The Jacksonport Thanksgiving Day Parade is fun and quirky, but more importantly we are helping members of the community.”

That first year, Taylor and Kiehnau invited family and friends to make up the entourage that would stroll up and down the streets of Jacksonport.

“We didn’t think anyone would come,” remembers Taylor, “so we threw birdseed instead of candy.” But folks came out and raised $350 to buy a Christmas meal for a family in need, and so began a tradition themed “neighbors helping neighbors.” 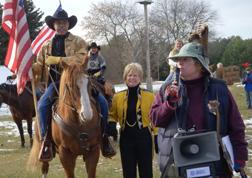 (Left to right) Verlin Kiehnau sits atop a horse, along side Jeri Taylor and the Jacksonport Thanksgiving Day Parade’s emcee, Trissa Crowley.

Since its inception, the Jacksonport Thanksgiving Day Parade has been used as an event to benefit local organizations, research, and those in need – from the Jacksonport Fire Department to a young mother with stage-four brain cancer to breast cancer research to Feed My People to a young boy with viral meningitis and encephalitis. The funds raised also benefit one “adopted” family each holiday season, ensuring they have a Christmas meal and presents to open.

Beginning as a small community tradition, the parade has come to garner the attention of CNN, who conducted a radio interview with Taylor a few years ago. Though attention is not the parade committee’s focus.

As Taylor says, “A community member in need is our first priority.”

This year, the Jacksonport Parade Committee has decided to support Mike Kaye, a life-long Door County resident who has been hospitalized since last August when a virus attacked his heart. Diagnosed with “Giant Cell Myocarditis,” this former Sevastopol School Board member and high school softball and basketball coach would usually spend Thanksgiving hunting before heading over to his in-laws’ home, which would have been decorated for Christmas by the non-hunters of the family, and everyone would enjoy a traditional Thanksgiving dinner of turkey and homemade stuffing.

When asked about the Kayes’ Thanksgiving plans this year, Mary says, “I’m only taking things a day at a time…I’m not sure what our daughters’ college and work schedule is yet, but I would hope at some point we would all be together for a couple of days over the Thanksgiving Day holiday as we have so much to be thankful for this year.” 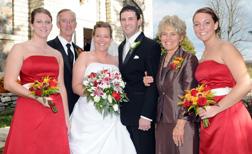 So the family continues on bravely, and as of Nov. 18, Mike has been moved from the intensive care unit of Froedtert Hospital in Milwaukee to the regular cardiovascular floor and listed as stable.

“The very rare Giant Cell Myocarditis, has damaged, beyond repair, the muscle in the left side of [Mike’s] heart,” explains Mary. “He has a device called the HeartMate II inside his chest to pump his heart, and it’s powered by batteries or electrical power. The pump can last many years but around January/February, when the transplant coordinator feels he is well enough, he’ll be activated on the heart transplant list and wait for a heart to become available.”

“Our family and friends have taken wonderful care of us since the day Mike’s illness began,” she continues. “Heartwarming, amazing, overwhelming, gracious, touching, thoughtful all come to mind to describe the support we’ve received from everyone. People have been so generous and kind, and it’s extremely humbling. It has also been comforting to know we aren’t alone on this scary, surreal journey as many people are thinking about us and praying for us, and we can’t thank them enough.”

Mary also says that learning of the parade’s intentions to benefit Mike “was a very pleasant, exciting surprise and another indication of the caring community we live in, and we are extremely thankful.” 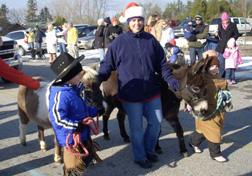 Beginning from the Jacksonport Fire Department at noon on Thanksgiving Day, (Thursday, Nov. 25) the parade will feature an eclectic entourage of floats and characters, along with the color guard, a camel, a Jacksonport fire truck, and of course, Santa. The parade will take a right on Highway 57 from the fire station to Mike’s Port Pub where it turns, heading to the Square Riggers and ending at J.J’s. Because of its unique design, parade viewers can see the parade essentially three times.

And, the Jacksonport Thanksgiving Day parade features its own Katie Couric – Trissa Crowley, who will stand at the corner of J.J.’s and comment on each participant as they pass by.

Money collectors will be along the route and in J.J.’s, where donations will continue to be accepted.

Taylor expects a good turnout, laughing as she says, “One thing we are always thankful for is when the Packers don’t play on Thanksgiving.”

The parade is open to anyone who would like to participate. Meet at 11 – 11:15 am at the Jacksonport Fire Station to join in.