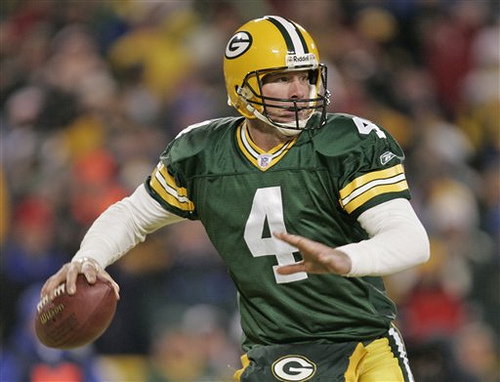 Brett Favre’s statistics tell only part of the story of his career. He retired as the NFL’s all-time leader in passing yards, touchdowns, wins, pass attempts, and pass completions, in addition to his most famous record, starting 321 consecutive games.

Yet Favre’s career is defined best by moments that stick in your mind 5, 10, 20 years later. Many hall of fame players have none. James Lofton, Andre Reed, Marvin Harrison and Jim Kelly were all amazing players, but if you try to think of a signature play for each, you can’t. With Favre, there are so many that it’s hard to choose your top 10.

As such, I didn’t even try. I narrowed it down to 18, and left dozens on the cutting room floor.

1. Monday Night Football game the day after his father died, when he threw for 399 yards and four touchdowns in a performance so impossible one can’t describe what it was like to watch, except that it seemed like a video game on cheat mode. Watch>>

2. Favre throws a touchdown pass to Andre Rison on the second play from scrimmage in Super Bowl XXXI, followed by his sprint around the field, helmet in the air. It’s not his best play, but the culmination of a journey puts this play so high on the list. Watch>>

3. An ill-advised dive into the end zone as the clock ticked down against Atlanta in the final game at Milwaukee County Stadium in 1994 (yes, the Packers played only five home games at Lambeau Field from 1933 to 1994). The play, made against Mike Holmgren’s specific advice, sent the Packers back to the playoffs, and came to represent everything about what Favre was as a player – “dumb and stupid at the same time” as kicker Chris Jacke described it.

4. Favre’s first game, when he set the tone for a never-say-die career by leading a 92-yard drive in the final minute, hitting Kitrick Taylor with a 35-yard game-winning touchdown pass to launch his legend. (Watch the 3:40 mark of the video, where you can see just how much of his body he put into the throw, and listen to Jim Lampley’s underrated, prophetic call “Is there a spark of life in Green Bay? Did Brett Favre wake up an echo or two with that one?”) Watch>>

5. An improbable four-game stretch to start the 1999 season in which Favre threw a game-winning touchdown pass in three of them. He victimized the Raiders first, then the Buccaneers, but my favorite was the 4th down, all-or-nothing dart to Corey Bradford to beat the Vikings. Favre was playing his first season without Reggie White, without Mike Holmgren, without many of the players he had won two Super Bowls with, and without alcohol for the first time. After the Raiders game, he wept like he’d won the Super Bowl. It was game 1.

This compilation of those game-winning drives is amazing, not just for the touchdowns, but to see a half dozen ridiculous throws and escapes before the touchdowns, and the beating Favre took on so many of his throws. Watch>>

6. NFC wild card playoffs, 1993. Favre uncorks a 40-yard across-the-field heave to Sterling Sharpe in the final minute to deflate the Lions in the Silverdome. Favre to Sterling Sharpe was incredible, if tragically short-lived. Sharpe was the best offensive player Favre ever played with, and a neck injury ended the run after just three years, 314 connections, and 42 touchdowns, including 18 in their final season together, still the 3rd most all-time in a single season.

Watch a terrible quality video of it here>>

7. The Monday Night Miracle. A heave to Antonio Freeman that Freeman bobbled, then clutched miraculously a breadth from the turf, then toted into the end zone to beat the Vikings in overtime. “He did what?!?”

8. An 82-yard drop from the sky, on the first play of overtime, to Greg Jennings against the Broncos on Monday Night Football in 2007.

9. An underhanded toss to Donald Lee in the Red Zone versus Seattle in the 2008 playoffs. First he was nearly sacked, but Favre spun out of it, and as he stumbled to the ground whipped the ball underhanded to Lee, who got the first down. It wasn’t a touchdown or a game-winner, but it is a perfect symbol of hundreds of similar plays Packers fans saw every Sunday that today are forgotten, like his backhanded flip touchdown pass to Antonio Freeman against Seattle in 1996.

10. Lambeau Field, game 16, 2003, arms in the air, looking up to his family in the box as the crowd roared upon the Vikings losing to the Cardinals in dramatic fashion to give the Packers the division title and a trip to the playoffs. The Packers had started the year 4 – 5, Favre broke his thumb, and then his father died. Somehow, the Packers clawed all the way back to make the playoffs in what now seemed like a year of destiny.

Most would list his record-breaking throws above this, but for Packers fans, this improbable trip to the playoffs meant more, that season embodied so much of what it was like to follow Favre for 16 seasons. Rather than a video of the celebration, I’ll share the video of the Vikings game (in part because I was at that Packers game and left early, depressed that the Packers were about to miss the playoffs. I heard the roar from the parking lot) just to rub it in.

Watch and revel in the call of the Vikings announcer>>

11. Favre ties Dan Marino with his 420th career touchdown pass in the most dramatic way possible, by hitting Greg Jennings with the go-ahead 57-yard touchdown pass in the final minute against San Diego in 2007. It was early in a season with unknown expectations, and the team’s first win that season that made you think, “hey, they might actually be good.”

12. Running off the field with Greg Jennings on his shoulders, touchdown number 421 in the books, and Dan Marino behind him as the greatest touchdown tosser of all time.

13. In a crucial game in November of 1995, Favre was expected to miss the first start of his career due to a severely sprained ankle. Instead, he played with a cast of tape on the ankle and threw five touchdowns to lead the Packers to a 35 – 31 victory.

14. Favre pulls himself off the turf after coughing up blood, then re-enters a game against the Pittsburgh Steelers in 1995. Moments later he throws a touchdown pass to Mark Chmura, leading the Packers to the NFC Central Division Championship. Thanks Yancey Thigpen.

15. In the mud at Soldier Field, a 36-yard lumber to score against Chicago on Halloween on Monday Night Football, 1994, possibly the slowest long touchdown run in NFL history, made to look slower by those Packers throwback uniforms.

16. An NFL-record tying 99-yard touchdown pass to Robert Brooks on Monday Night Football against the Bears. A career so great and filled with so many moments that the longest play from scrimmage in NFL history only ranks 16th. For reference, Tony Dorsett is a hall of fame running back who had a tremendous career with the Dallas Cowboys. His signature play, and the only one 99% of football fans remember, is his 99-yard run against Minnesota on Monday night football.

17. It has been lost to history in part because it didn’t require an iconic Brett Favre play, but it’s hard to overstate just how transformative the Packers divisional round victory over the San Francisco 49ers in Jan. of 1996 was. The 49ers were defending Super Bowl champs, playing at home, helmed by all-time great quarterback Steve Young. This was defensive coordinator’s Fritz Shurmer’s signature game, as the Packers dominated the 49ers and put the nail in the coffin of their 5 Super Bowl run from 1982 – 1994, but Favre was flawless, completing 21 of 28 passes for 299 yards and two touchdowns. It was the first time the Packers defeated a legitimate Super Bowl contender in the playoffs, and the first time Packers fans thought this team might really be special.

18. The touchdown pass to Greg Lewis in the back of the end zone in Minnesota, which kicked off the Vikings run to the NFC championship game and three Adrian Peterson fumbles away from the Super Bowl.

Vikings fans have had enough pain on this list, so here’s one they can enjoy, with a great Paul Allen call. Watch>>