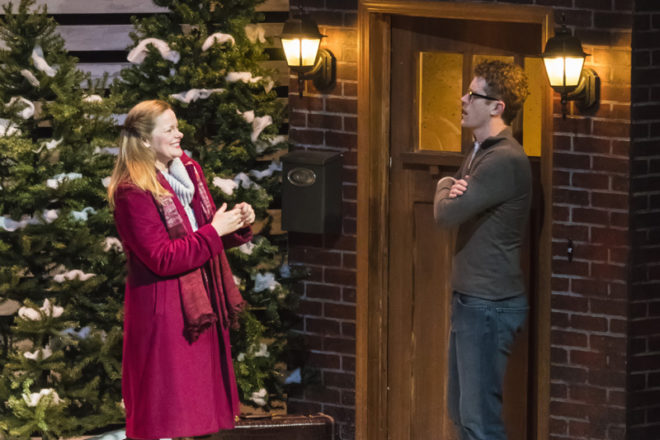 On a moonless night, the residents of a remote, mythical town find themselves falling in and out of love in unexpected and often hilarious ways in the charming, offbeat comedy Almost, Maine by John Cariani. Almost, Maine is the final play of the 2017 season at Peninsula Players and launches the theater into its fall season Sept. 6 – Oct. 15. While the northern lights dance overhead, the not-so-tough women and men crack some beer and try to make sense of love.

Almost, Maine is a series of 10 loosely intertwined vignettes about love and loss featuring 19 characters played by four actors.

“It’s a little different in that, while it tells a full story, it does so through visits to different couples in different parts of town at around nine on a Friday evening,” said Patrick New, director of Almost, Maine and veteran Peninsula Players actor. “All of these couples are experiencing a magical moment, some happy, some not, but a moment just the same. They are at a crucial precipice and ‘almost’ to what’s next.”

New makes his directorial debut at Peninsula Players with Almost, Maine. His directing credits include the world première of Fooling Buddha at First Folio Theatre, the American première of The December Man for the Mary Arrchie Theatre, The Little Prince at Clarence Brown Theatre, Hellcab with Famous Door Theatre, As You Like It and Theatre of Film Noir with the Folio Theatre Company.

The characters of mythical Almost are ordinary, hard-working people who take time to speculate and wonder about things, and their thoughts and opinions are spoken honestly from the heart. Life may seem slower and unpretentious in a rural community, but in reality, life everywhere is knotty and convoluted and the residents of Almost echo those complexities.

Almost, Maine performs Tuesdays through Sundays at 7 pm, except for Sundays Sept. 17, Oct. 1 and 15 at 3 pm. Discount tickets are available for groups of 15 or more. Ticket prices range from $38 to $44. For more information or to reserve tickets, call 920.868.3287 or visit peninsulaplayers.com.