In 1972, a 19-year-old college junior stood in the woods in Peninsula Park to listen to a group of musicians called the Heritage Ensemble, because he didn’t expect the show to be worth the 50-cent ticket price.

If Fred Heide (several years away from becoming Doc) hadn’t liked what he heard that night, there might never have been an American Folklore Theatre (AFT). But Heide became a part of Heritage Ensemble and was joined 10 years later by another 19-year-old named Fred Alley. In 1990, the two of them, with Gerald Pelrine, became co-founders of AFT. 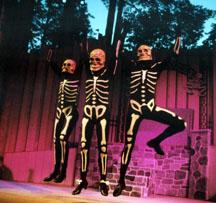 Bone Dance on the AFT stage.

Over the last two decades, 207 people have graced the stage and worked in the office and behind the scenes at AFT. Doc, Fred, Dave Alley, Neen Rock, Jeff Herbst, Jimmy Kaplan, Michael Christman, Laurie Flanigan, Lee Becker, Stewart Dawson, Doug Mancheski, Kaye Christman, Eric Lewis and Pam Krieger have been with AFT for a total of 205 years. The first five on the list were with Heritage Ensemble for varying lengths of time before it became AFT, and all 14 have been with the company for at least half its existence.

At the end of the 1990 season, Chan Harris, editor of the Door County Advocate, wrote of the little theater in the woods with amazing foresight: “We suspect the next 20 years will bring continued expansion and national exposure.” This summer AFT is celebrating its 20th anniversary under the stars. Its fall shows in local town halls and elsewhere began in 1992, and Door Shakespeare grew out of AFT’s workshopping a performance of A Midsommer Night’s Dreame on a Sunday night in August 1994.

The theatre has produced 44 original musicals. Most have been written “in house” by Doc, Fred, Jimmy, Lee and Laurie Flanigan (one co-authored by Jacinda Duffin). Since 2004, the Chicago-based team of Dave Hudson and Paul Libman has contributed three shows, and this summer Life on the Mississippi, collaboration by Douglas Parker and Denver Casado, will celebrate the 175th anniversary of Mark Twain’s birth and the 100th anniversary of his death. Doc and Jimmy’s beloved Belgians brought a bit of heaven to the park eight times, while Fred and Jimmy’s Lumberjacks in Love and Guys on Ice have appeared seven times each.

From a group of college students who sang in Peninsula State Park for a few weeks each summer, AFT has grown into possibly the only theater company in the country producing original musicals in both summer and fall. When Heritage Ensemble became AFT, Doc said, “We’ve done revue format shows with songs, narration and comic and dramatic monologues for 20 years. Now we’re interested in exploring other options. But we’ll never leave Door County. Why would we go when we have 300 a night breaking down the door?”

Doc couldn’t have imagined in 1990 that within five years Bone Dance would draw more than 800 people one night or that by 2009, attendance for the season would top 45,000. While AFT has been true to Doc’s vow never to leave the park, it has spread its wings to local town halls, locations all over the state and beyond. On the day in 1998 when it was announced that Guys on Ice, Fred and Jimmy’s most popular collaboration, would be moved from the Milwaukee Rep’s Stackner Cabaret to the larger Stiemke Theater for an extended run, there were so many calls that the phone system at the box office shut down. It even backed up the computer at the phone company switching office, temporarily shutting it down, as well! 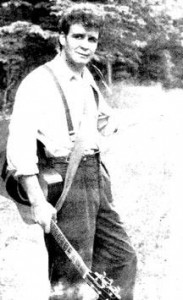 And then there was Doc and Lee’s Guys & Does, which in 2009 out-sold all previous AFT fall productions, playing to almost 10,000 people in eight weeks, with close to 3,000 more turned away. By actual count, a performance in the final week inspired 204 bursts of laughter and 20 rounds of prolonged applause. It will, of course, be back this fall.

Money has never been plentiful. After the first fall show in 1992, Fred wrote, “I still have the final budget tally for And If Elected. It shows a $30 profit.” In 1996, a brochure asking for contributions said, “AFT can not pay our bills with ticket sales alone. Our goal is to raise $100,000 in donations in the coming year. Although we get by on a shoestring budget, every so often we need a new pair of shoes.”

In recent years, despite a troublesome economy, AFT fans have been incredibly generous. Fund-raising campaigns have provided a new stage, dressing rooms and tech booth, as well as money for the New Works Fund that supports the writing and workshopping of original musicals. More than 200 volunteers also contribute to the success of every season. This summer the AFT Board is launching a new venture, publishing for national distribution shows it has produced, beginning with Guys & Does and the three Hudson-Libman musicals.

There has been hilarity on and off stage: In 1994, John Hansen, AFT’s publicity director/house manager, was engaged in a desperate search for long red underwear for Doc’s character in Belgians. Learning that a store in Sturgeon Bay had sold its last pair to a woman just driving away, John pursued her car and flagged her down. “Are you the police?” she asked. “No,” said John, “I’m with a theater company, and I need your underwear!” Who can forget Doug cavorting in a tutu or strutting his stuff as Elvis, Lee as the bumbling DNR Doug, Karen Mal as an accident-prone angel or Jeff as a slow-witted farm hand?

Early years of the Heritage Ensemble.

And there has been tragedy. In the spring of 2001, Fred Alley, often described as the heart of AFT, was preparing to go to New York to receive the Richard Rodgers Award for The Spitfire Grill, the play he wrote with James Valcq. It included $100,000 to take the show off-Broadway that fall. On May 1, Fred, just 38, died of a heart attack while jogging near his farm home.

“It was as if the North Star had been plucked from the sky,” Doc said. “There are days when the loss of Fred threatens to crush the breath right out of me, but in the company of those who loved him, I know we will all find North together. Surely Fred would have wanted it that way.”

Besides Life on the Mississippi, the 2010 summer season will include Cheeseheads, The Musical and Bone Dance. Fred will be smiling.

This article is based on the author’s book, See You Under the Stars . . . The History of American Folklore Theatre, published this summer by AFT.