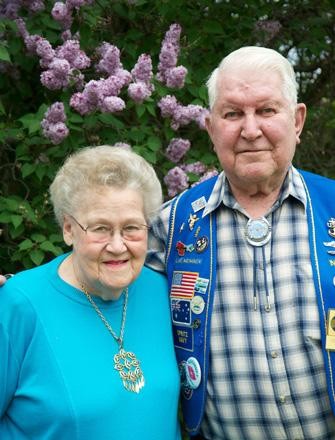 Lenore and Norman Carroll outside their home in Sister Bay.

It struck me as I was sitting at the old, heavy metal kitchen table that was tucked against the wallpaper of Norman and Lenore Carroll’s modest Sister Bay home.

I had stopped by to drop off a few extra copies of an article I had written about Norman a couple weeks earlier, and Lenore invited me in for coffee. She was now handing me a worn Tupperware container full of her homemade chocolate chip cookies. I had more than one.

Norman is a decorated veteran of World War II, a torpedo man who served on a submarine in the waters off the Philippine Islands. One of a rapidly dwindling number of fewer than 2,000 submariners left from the war, he told me his story with self-deprecating humility a few weeks earlier as Lenore played bingo at this kitchen table, Herb Alpert on the radio.

As we sit, I can see the bowling mementos in his living room. Norman tells me that the trophies, which I had mistaken for his in my story, actually belonged to Lenore. I’m embarrassed by my assumption, though they both laugh it off. Lenore tops off my mug of coffee.

After the war they spent a decade in Norman’s hometown of Philadelphia before returning to Sister Bay. Once back here, they opened a small family restaurant, the Carroll House, in 1957. For 25 years they cooked meals just a few steps from their home behind the restaurant, the same home where Lenore’s parents once lived. The home where we sit now, 28 years after they sold the restaurant.

They’ve lived a humble life, worked hard, kept their humor. Their home has received no pricy overhauls; they haven’t blown out the walls of their kitchen for a fancy new island or a Viking stove (I get the impression that Norman and Lenore cook pretty good meals on the old one that sits a couple feet from the back of my chair). The living room is ringed in wood paneling. Their driveway isn’t paved, still a gravel surface that turns to dirt, then grass.

In short, like many in their generation, they didn’t get the American memo. Veterans of Norman’s generation are often used in the rhetoric of excess. Of politicians who urge us to spend, to forget tomorrow, to honor veterans by paying no attention to the battles they’re fighting or the reasons they’re sent.

It’s funny that those who actually did the fighting, that “Greatest Generation” who make us believe America is the greatest country in the world, tend not to want in on this party of ours that is now running on fumes.

It struck me at the Carroll’s kitchen table, one that seemed, in all its modesty, most American to me.