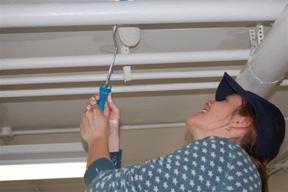 It began with a simple roof replacement project in September 2009. The plan was to replace the roof, pop in a few new windows upstairs, and tolerate six weeks – six weeks max – of disruption in my home. In typical fixer-upper fashion, however, that proved to be a comically unrealistic goal. By the time an ill-fated pipe-finding/hole-in-wall-creating expedition concluded, “six weeks max” had turned into months and every room of my home had been sucked into the ordeal.

I chipped away at the painting projects one by one all last winter and spring; but, predictably, I fell victim to the odd universal rule that the closer one comes to completion, the more one’s momentum slows. That last 10 percent has a way of just dragging on forever.

Then, in spring, we moved into our new Baileys Harbor office. Thanks to my hard-earned “expertise” in painting (and a stubborn unwillingness to pay someone else to do what appears so easy), there I was painting every nook and cranny of yet another 1,500 square-foot space. (Fortunately, I had help from co-workers, friends and family, which not only sped things along, but was also effective in curbing the lonely and distressing habit I had developed of conversing aloud with my cat during the long hours of painting.)

Now, at the end of 2010, I find myself – incredibly – still painting. At the office, we’re attempting to wrap up the projects that we abandoned last summer in time for our Holiday Open House on December 22nd. There’s another room’s worth of trim and a door to be painted, as well as some baseboard in need of a second coat. At home, there is an unsightly drywall patch in my bathroom that stares me down each morning as I brush my teeth, pleading to be given rank above the unpainted closet doors and staircase that also still linger on the to-do list.

And, of course, if there’s one true thing about a freshly painted wall, it is that wall’s ability to make a neighboring, unpainted wall look terrible by contrast. And so, as the sun sets on 2010, I see more painting chores expanding before me. I can only hope that 2011 will be the year this test in patience finally ends and I can lay down my brush once and for all.