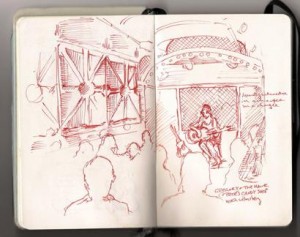 Midtown Manhattan. It’s everything that I’ve known, and everything hated about The City. Wanting to scrape it from the bottom of my boot, like every perky production sitcom, every autobiographical exposé about nannying Upper West Side children, and the dreaded Times Square. Inhabited by the overly important, and by those who dodge the gawking hordes of out-of-towners.

On the brief and unfortunate occasions when business took me midtown from my neighborhood in the East Village, I found that I could immediately empathize with this place. Why? Because it’s riddled with tourists. They stop on a dime on the sidewalk, causing a pile-up. They point at buildings, literally clothes-lining people. They ask where the “Ground Zero Mosque” is. It is no wonder this is the most ornery, harried, exasperated area of the city. This is where David Sedaris assumed, barring his understanding of Latin, “that the city motto translates to either Go Home or We Don’t Like You, Either.”

This was not the only similarity to home. The immense importance of a respite was another. Pete’s Candy Store is a not-too-hip bar in Brooklyn, with gob-smacking live music in a backroom that resembles the interior of a gypsy wagon. It reminded me of the Bayside or the AC Tap, with young and old, all at least mildly convivial, and all know the importance of a good drink with their atmosphere. One night in the gypsy wagon, Gregory and the Hawk (one of my favorite singers) was warbling adorably. I learned it was a very chance show, being only one of four she played all year.

At the end of the set, I crept out to the back patio and called some friends back home. I don’t recall much of the conversation, but I remember remarking with some shock that I could see the stars out tonight. A pale comparison to the celestial views in middle-of-nowhere Northern Door, the dim, sodium-light stars reminded me that I was an out-of-towner – maybe a tourist even – far away from any sort of comfort zone. But they also reminded me that this place isn’t all that big…relatively. At that moment, those stars were home enough – and I knew that wherever you make your home, you try not to be one of those out-of-towners.