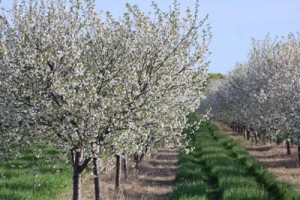 John Zettel opened the annual meeting of the Wisconsin Cherry Growers (WCG) at The Log Den in Egg Harbor on June 30 with the answer to the burning question that everyone has been asking – When are the cherries going to be ripe?

“Generally, mid-July to mid-August,” Zettel said is the answer he has been giving to the oft-asked question. He suggested people check out the WCG Facebook page for more specific details as the season progresses.

Tim Siehr of the Door County Farm Service Agency reported on updates to the Tree Assistance Program (TAP) through the recently passed farm bill. It was a subject of great interest to the cherry growers, many of whom suffered tree loss during the hard winter. The revised TAP allows orchardists who suffered tree loss due to weather to enter claims dating back to Oct. 1, 2011.

Still reeling from the crop failure of 2012, tart cherry growers are hoping 2014 turns out to be a good year. Jim Seaquist of Seaquist Orchards reported on the anticipated 2014 cherry crop.

“It was extremely painful,” Seaquist said of 2012

Michigan, the leading producer of cherries, expects to be down 10 percent from 2013 production, largely because of colder than normal weather and freezing damage. Michigan expects to harvest 181.5 million pounds.