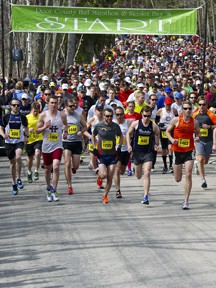 Organizers welcomed a record 2,350 runners to last year’s event in Peninsula State Park, which filled two months early. It is expected to fill even faster in 2014. Just 1,800 runners will be allowed into the May 3, 2014, half marathon, while the 5k is limited to 550 runners.

The race has been called one of the best in the Midwest by Runner’s World writer Jenny Hadfield, and writer Tom Held likened the course to “running in a wooded cathedral.” Such praise, plus Door County’s reputation as one of the premier vacation destinations in the country, has made the race a must-run on the nation’s half marathon circuit.

“The course and organization are integral to our success,” says race director Brian Fitzgerald, “but it’s the Door County community that puts this race in a class with the country’s great races. We have amazing volunteers and an extremely supportive, welcoming community that embraces the event.”

Organizers will also offer runners an opportunity to make their run more meaningful in 2014 with the return of the Run for A Cause program. Runners raised more than $17,000 for charity through the program last year. For more information visit doorcountyhalfmarathon.com.