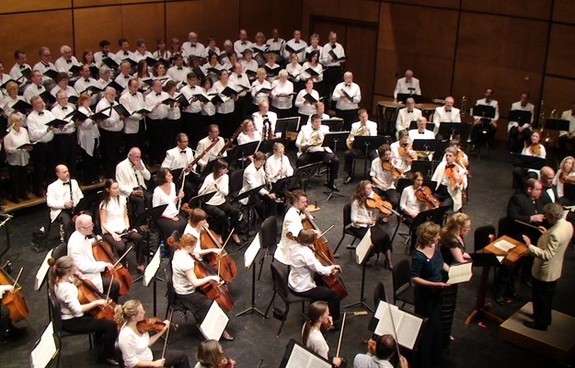 The 64th season of that grand old lady the Peninsula Music Festival (PMF) is off to a bright start at the Door Community Auditorium despite the dark themes of pieces on the program. After the traditional first night “Star-Spangled Banner” with both the orchestra and audience rising to their feet, the audience singing along, some of us could almost hear the voice of founding conductor Thor Johnson joyfully shouting from the heavens, “Play music!” as this season’s nine-concert series began.

The backstory of Robert Schumann’s Manfred Overture that opened the program is as dramatic at the piece itself. The composer was inspired by the verse drama Manfred by English Romantic poet Lord Byron, the tragic story of a grieving Swiss nobleman who attempted to assuage his suffering through magic that ultimately led to his death. The overture musically illustrates through its brooding tone and restless development the nobleman’s emotional struggles and ultimate end.

While Mozart’s Piano Concerto No. 20 in D minor was brighter, according to the program notes of Richard Rodda, the “new and disturbing work…did not conform to [its first audience’s] standard for a pleasant evening’s diversion” because it “demanded greater attention and a deeper emotional involvement.”

Moscow-born pianist Boris Slutsky, with his technical facility and dramatic artistry, evoked an emotional engagement with his PMF audience as they rose to their feet and brought him back for three bows. Slutsky, now on the faculty of the Peabody Conservatory of Music, has won countless competitions and has performed as a soloist throughout the world.

As a side note, Slutsky performed on the Esther Browning piano. She was the mother of the late renowned pianist John Browning, a featured PMF soloist and supporter of the concert series.

The restless Allegro movement of the concerto featured an undercurrent of strings beneath the frenzy of piano. While the lyrical andante Romanza section offered a lighter contrast, at times it had a darker intensity. The agitation of the Rondo finale progressed to a spirited resolution.

Schumann’s Symphony No. 2 in C major completed the program. As with his opening overture, a dark backstory underscores the piece. At the time of his work on the Second Symphony, the composer experienced emotional turmoil, insomnia, fears, ringing of the ears, and cold extremities along with other symptoms. A modern explanation for his health concerns lies in the fact that during his younger days before he became the devoted husband of Clara, he had been afflicted with syphilis and was treated with mercury, the “cure” nearly as devastating as the disease.

The solemn opening movement of the Symphony was brooding and troubled, with a bombastic resolution followed by a persistently whirling lighter Scherzo. The Adagio offered lyrical oboe and clarinet solos in wistful conversations with the orchestra, leading to a gentle resolution of the movement. The concluding Allegro was celebratory in tone and ended with an affirmative sense of triumph, one that again brought the audience to its feet and conductor Victor Yampolsky (now in his 31st year with the Festival) back for three bows.

The Peninsula Music Festival runs through Aug. 20 with 7:30 pm concerts on Tuesdays, Thursdays and Saturdays. For information and tickets, visit musicfestival.com or call 920.854.4060.