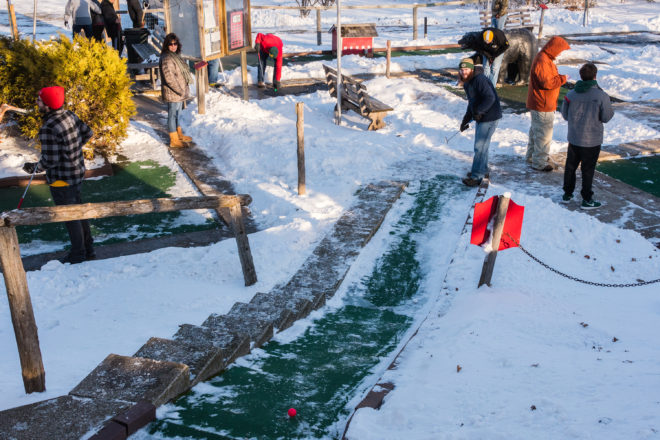 2018 will mark the final time mini golfers are invited to traverse the cold, snowy and icy conditions of the Red Putter’s Frostbite Open. Photo by Len Villano.

The late Bob Yttri was always coming up with quirks to add to the fun at The Red Putter mini golf course in Ephraim. One of those, the Frostbite Open, will take place for the last time on New Year’s Day.

Yttri, who died in April, was known for handing out prizes for low scores and high scores, for buying pizzas for frequent players, and for staying open late for folks to get a final game in on a summer’s night. Eight years ago, playing off the success of his annual Pro Tournament in August, Yttri launched the New Year’s Day Frostbite Open.

Yttri’s daughter, Tracy Yttri Opper, said this year’s tournament will be the last.

“It’s not an easy decision to make, but my dad had been thinking about it the last couple of years,” said Yttri Opper.

Prepping the course for the tournament takes a toll on the greens, she said, as shoveling snow and chipping ice off the greens is tough on the already battered course. She said safety is also a concern.

“We’ve had a couple of people slip and fall on the ice,” Yttri Opper said. “Nothing serious yet, but my dad was worried about that too.”

The tournament draws about 30 to 40 people each New Year’s Day to compete for the $700 first prize. It drew a high of 76 golfers in 2015. Nick Kwaterski has won the tournament four times.

Unlike the annual Pro Tournament held in August, there is no need to qualify for the Frostbite Open. However, Bear and Badger have been known to be particularly angry in the cold, making play extra difficult.

The tournament begins at 2 pm, and two rounds of golf will be played. Register and practice between 10 am and 1:45 pm. Hot drinks and chili will be served. The cost is $25 to enter. In addition to the top prize, cash is awarded for second place ($200), third place ($100), best single game ($100), and everyone who completes both rounds will receive a bumper sticker saying, “I survived the Frostbite Open!”