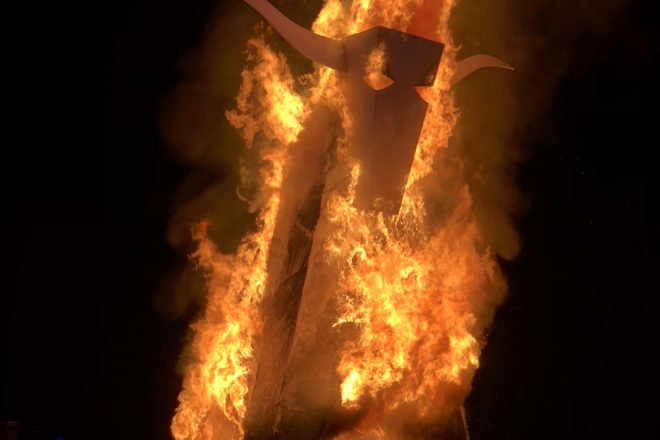 The Burning Cow Music Festival is exactly what it sounds like: a music festival that takes its name from setting a 30-foot wooden cow ablaze to honor Wisconsin culture and the “temporal nature of the event, the bounty of summer and life itself.”

Located a few minutes north of Sturgeon Bay, it’s a three-day camping-and-music experience, July 18-20, with genres spanning blues to rock to folk. Organizers encourage festival-goers to explore and hike during the day and to enjoy music and party at night.

We’ve highlighted some of the festival’s performances below, but check out burningcowfestival.com to review the entire line-up.

This Door County favorite will rock the stage with influences from ZZ Top to Clutch. They’re “musical mathematicians of rock-and-roll religion!” (youtube.com/watch?v=ql8Hrct1T0s)

This blues-rock trio from Green Bay has been performing, writing and recording for more than 30 years. It released its latest album, When Pigs Fly, in 2018. (youtube.com/watch?v=rhC1gAAXNWA)

This award-winning, funky soul band from Nebraska is bringing tracks from its new album, Do It Now, released this year. It’s gotten attention from outlets such as Rolling Stone, No Depression, Relix and more.

“This whiskey-fueled, two-man frenzy of blues-driven rock ’n’ roll noise straight from Fort Wayne, Indiana, promises to hit you like a shock wave and show you a foot-stompin’ good time.” Enough said.

This classic Southern rock-and-roll band from Chicago is working on dropping its new album, Preach Pollution, this summer and has worked with bands such as Tyler Bryant and the Shakedown and last year’s headliner, Delta Saints. (youtube.com/watch?v=JaThnnWETis)

Knowles brings his British and American twist to blues rock with years of touring under his belt. He’s toured with Jeff Beck, Buddy Guy, The Who, Peter Frampton and more. (youtube.com/watch?v=PjIPuLEAke8)