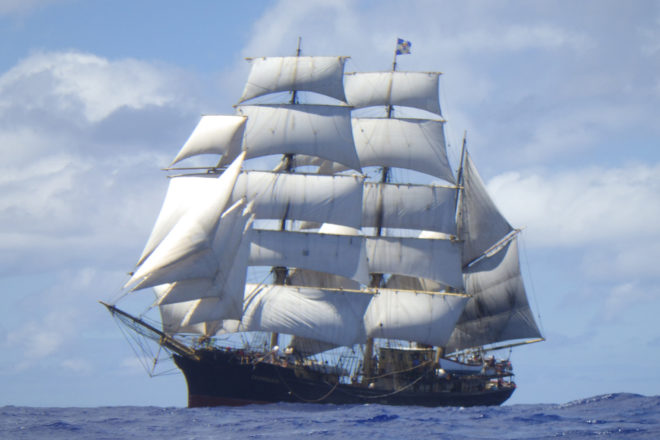 Picton Castle, one of the tall ships that will be part of the 2019 Tall Ships Festival. Submitted.

Some of the most majestic vessels you’ll ever see on the Great Lakes will return to Sturgeon Bay July 29 for the Nicolet Bank Tall Ships Festival.

The main festival takes place July 26 – 28 in Green Bay, where attendees can tour ships and join in special excursions on the vessels. Then the ships will sail through Sturgeon Bay, where they are expected to dock for the night before continuing through the Sturgeon Bay Shipping Canal and into Lake Michigan waters.

Seven of the towering vessels have been announced, including one of Door County’s most famous vessels, Utopia.

The 77-foot staysail schooner was designed by the late Fred J. Peterson and built by Peterson Builders. Her maiden sea voyage was in 1947 when she cruised the North Atlantic, Mediterranean Sea and Caribbean Islands. In 1956, Peterson and his crew embarked on a three-year cruise around the world. It is estimated Utopia has logged more than 60,000 miles. Peterson’s son, the late philanthropist Ellsworth Peterson, donated Utopia to the Inland Seas Education Association.

The Barque Picton Castle is a three-masted tall ship based in Lunenburg, Nova Scotia, Canada and is best known for its adventurous sail training voyages around the world. It is a fully certified and registered Cook Islands tall ship whose mission is deep ocean sail training and long-distance education voyages.

Picton Castle is perhaps best known for her world circumnavigations. She has visited the Great Lakes twice, sailed numerous times on tours of the East Coast of the Americas, completed a Caribbean Voyage and in 2008 sailed to Europe, Africa and the Caribbean on a voyage of the Atlantic.

U.S. Brig Niagara, home-ported in Erie, Pennsylvania, is a replica of the relief flagship of Commodore Oliver Hazard Perry. She is the embodiment of the dual mission of the Erie Maritime Museum and the Flagship Niagara League: She is both a historical artifact and a vehicle for sail training, an experiential learning process that preserves the skills of square-rig seamanship. It is the third reconstruction of the original vessel and launched in 1988 commemorating the 175th anniversary of the Battle of Lake Erie.

Inland Seas is a schooner owned by the Inland Seas Education Association whose mission is to promote stewardship of the Great Lakes through hands-on education. Students gain a unique insight into the basic ecology of the Great Lakes and assist seasoned volunteer instructors with the collection and analysis of Great Lakes samples.

Appledore IV is a schooner whose mission is “to foster environmental stewardship of the Saginaw Bay watershed and the Great Lakes ecosystem and to provide personal development opportunities for learners of all ages through shipboard and land based educational experiences.”

Pride of Baltimore II was designed as a “sailing memorial” to the Pride of Baltimore which tragically sunk just north of Puerto Rico in May of 1986. Pride of Baltimore provides engaging services to communities worldwide including youth programs, overnight crew experiences, deck tours, private sailing charters, dockside receptions, and day sails. Each year, Pride of Baltimore II serves approximately 100,000 people and has sailed over 250,000 nautical miles to 40 countries and 200 different ports.

Bluenose II is an international sailing ambassador and is home ported in Lunenburg, Nova Scotia. The mission is to promote the history and legacy of Bluenose & Bluenose II and teach and promote seamanship and life skills to young Canadians. She is a faithful replica of her famous mother, the original Bluenose schooner that was launched in 1921 and raced undefeated in international competition for 17 years.

There is no fee to watch the vessels as they enter Sturgeon Bay after their Green Bay stop, then head east through the shipping canal and on to Lake Michigan.

A portion of the festival proceeds will be donated to Green Bay Sail & Paddle, an organization that connects the Greater Green Bay community with the largest freshwater tributary in the world through sailing and paddle sports.

Tickets for the Green Bay stop of the Tall Ships Festival, July 26 – 28, are on sale at tallshipswisconsin.com.