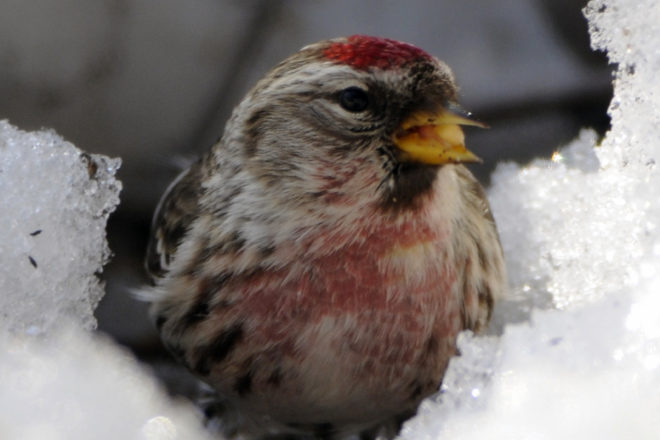 A male common redpoll, eating cracked corn, shows a wash of red on its breast. Photos by Roy Lukes.

Another substantial snowfall has been cleared from the driveway and bird feeders as frigid Canadian air covers Wisconsin. When possible it is nice to just stay indoors and watch the wildlife in the yard and see which birds are enjoying the daily handout.

The Wisconsin Birding Network indicates widespread reports of common redpolls. This is a species that does not spend the winter here every year. Our 21 years of Christmas bird counts done in the Sturgeon Bay circle listed eight years when no redpolls were seen. The high count was 228 in 1999 and, in the Brussels circle, the high number was two years earlier with a total of 588.

Redpolls often will be at feeders in the company of pine siskins or American goldfinches. They are circumpolar wanderers of the first magnitude. A redpoll that was trapped and banded with an aluminum leg band in Michigan one early spring was recaptured by a Russian ornithologist the following spring in Siberia, nearly 4,000 miles away. This is quite the feat for a bird weighing about one-half ounce.

These stubby-billed finches, similar to a chickadee in size, have three facial characteristics that are easy to see:  a red forehead patch, yellow bill and black chin spot. Their upper parts and flanks are streaked with brown, making them appear considerably like pine siskins from a distance.

The species name of the common redpoll is flammea, in allusion to the red forehead patch and also to the beautiful rosy pink that dribbles down the breasts of some males. We estimated in studying a huge flock at a friend’s feeder, that only about 10 percent of the redpolls there had rosy breasts.

Early colonists in America recognized them because these birds also inhabited their home countries in Europe in winter. There is no question in my mind that these birds consumed much of the same food in winter then as they do now. The bulk of it consists of the seeds of birch, alder, willow, ragweed, smartweed, pigweed and chicory. Seeds of the red-stemmed pigweed, an unwanted and unharvested plant in some gardens, rank near the top of their most commonly eaten food. 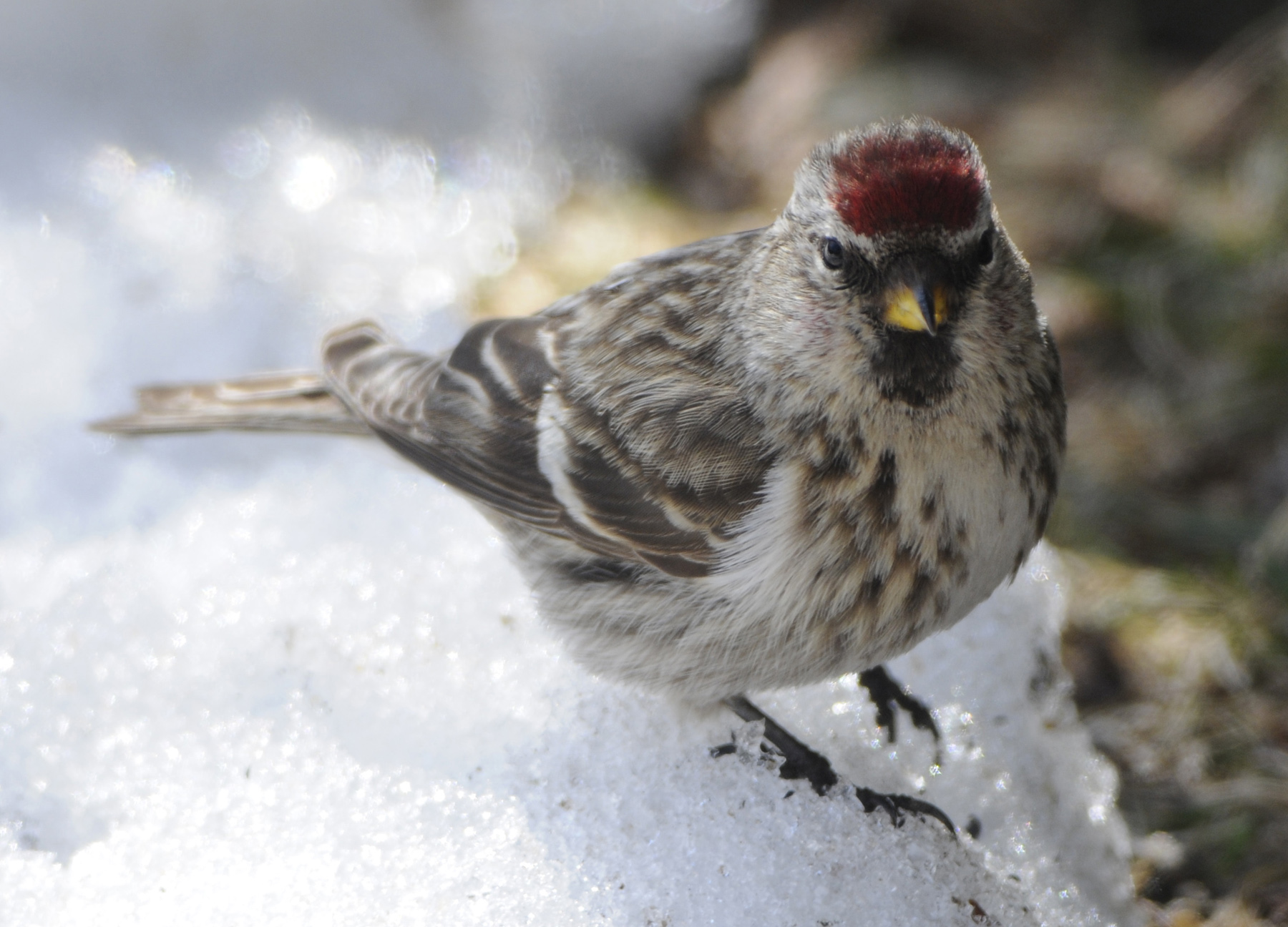 This female common redpoll displays its red forehead patch, black chin spot and yellow beak, but no red on its breast.

Theoretically redpolls can’t exist during the winter in the Arctic where the temperatures may plunge to 80 degrees below zero Farenheit – but they do!

One adaptation that enables these 12- to 13-gram sprites to do so is an extension, referred to as a diverticulum (die-ver-TIC-you-lum), on either side of the esophagus, where extra food can be stored and consumed during the long nighttime hours, for example.

Food, such as birch seeds – a very high energy food, can therefore be available for consumption during hours of darkness when food-finding would otherwise be impossible. Bear in mind that the hours of darkness in an Arctic winter greatly exceed daylight hours.

This food-storing capability can also be looked at as an energy-saving strategy. The redpolls will gather a lot of food quickly, then retreat to a perch where they will slowly consume the seeds. This action also reduces aggressive encounters, which use considerable energy.

The hulls and meats of the seeds are softened in the diverticulum. Less body heat is lost through having to raise and lower their heads repeatedly during feeding. Energy is being conserved by the bird remaining, in a sense, in a confined cavity, a dense coniferous cover. The redpoll will also fluff out its feathers helping to conserve heat. Little wonder that the common redpoll and its close relative, the hoary redpoll, can survive colder temperatures than any other songbird.

The largest flock of redpolls Roy ever witnessed came one wintery morning in 1963 just at dawn. He was staying with his friends who introduced him to the flying squirrels northwest of Green Bay, and as accustomed, they awoke and started their day early. Roy glanced out the kitchen window to the east where the lighter morning sky made it possible to make out birds moving over the 20-acre field of weedy stalks protruding above the snow.

The three of them took binoculars and a spotting scope out to see if they could identify the birds. Little did they realize as they started out to find themselves in the middle of hundreds and hundreds of feeding redpolls. Roy said they were surrounded. Everywhere they looked were redpolls and more redpolls. They estimated their number was between three and four thousand. At no time since have we ever heard of a flock as big as that.

You may be seeing common redpolls at your feeders and a few people have told of seeing a hoary redpoll. This species has similar head and chin markings but the body of the bird is much whiter with very little brown streaking. Look through your favorite field guide to birds and compare the two species.

For all you bird feeder watchers this Friday begins the 21st annual Great Backyard Bird Count. It is a four-day event, Feb. 16-19, that you can do from the comfort of your home and your reports can easily be submitted online by following a few simple directions. This is a joint effort of the Cornell Laboratory of Ornithology, the National Audubon Society and Bird Studies Canada. In 2017 more than 181,000 checklists were submitted, the greatest in history.

Learn about the count by going to gbbc.birdcount.org/about/. There are links to learn more and to help you get started. This bird count is happening throughout the North American continent and information gathered will help scientists learn how weather and climate change affect bird populations, how the timing of migration varies from year to year and numerous other factors such as avian diseases.

When the count is finished you will have online access to many checklists zeroing in on different areas of the country to see maximum numbers of birds and which species were more prominent in your state and county.

So get up early on Friday and be sure your feeders are stocked so that you can have good numbers of birds to count this weekend. The redpolls, chickadees, goldfinches and woodpeckers will thank you!

Charlotte Lukes will present two programs on Feb. 20 at 7 pm in the Collins Learning Center at Crossroads at Big Creek on Michigan Street in Sturgeon Bay. These are sponsored by The Door County Master Gardeners and free to the public.

One program is a tribute to her late husband, Roy Lukes, called “Wild Orchids of Door County.” It will show the chronological blooming of many species that Roy photographed during a period of nearly 40 years.

“Spring in Door County” is the other program highlighting the wildflowers, birds, animals, butterflies and mushrooms of the spring season.