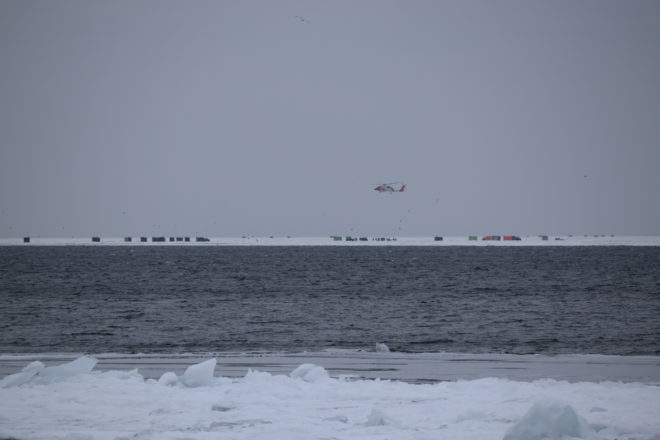 A U.S. Coast Guard helicopter with people awaiting rescue on an ice floe can be seen from shore about one mile north of Little Harbor around 11 am on Thursday, Feb. 4. Photo by Doug Henderson.

All who were stranded Thursday on three separate ice floes in Door County were safely rescued before the winter storm blew in, according to an update from the U.S. Coast Guard at 5:30 pm Thursday.

Total people rescued numbered 66, according to Lonnie Walp with the U.S. Coast Guard Great Lakes Ninth District Command Center. The number of people requiring rescue kept shifting as the effort developed, Walp said. About 22 people had been rescued as of around 1:15 pm, according to U.S. Coast Guard Petty Officer Andrew McGinnis, and at that time, they believed there were fewer people stranded.

“People were ice fishing, and the weather changes and warms up enough to release the ice from the shore, and it drifts away,” McGinnis said. “There were three ice floes, each having a different number of people.

Ice shanties could be seen from the shore on one of the ice floes along Little Harbor around 1 pm, but there were no reports of vehicles on the ice.

“I imagine they all walked out when [the ice] was attached, before someone noticed it wasn’t anymore,” McGinnis said.

The U.S. Coast Guard is leading the rescue effort with the assistance of local fire departments, a local ice rescue team and airboats from both Sturgeon Bay and the Wisconsin Department of Natural Resources.

The rescues were taking place while Door County and the region was under a winter storm warning for heavy snow and gusty west winds. The storm didn’t reach Door County until around 3 pm and by that time, most of the rescues had taken place.

For more on this story, see the Feb. 12 issue of the Peninsula Pulse.