Funding to protect America’s coastline – including Great Lakes coastline – has trickled from the National Oceanic and Atmospheric Administration to projects along Door County shores through grants from the Wisconsin Coastal Management Program.

The following grants, totaling $224,653, were awarded to local projects: 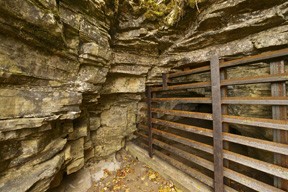 The Horseshoe Bay Cave in Egg Harbor is home to over 1,000 bats that call Wisconsin their winter home.

The Department of Natural Resources (DNR) received a coastal management grant to help Door County acquire Horseshoe Bay Cave by preparing a management plan to prepare for future public use of the cave while protecting the bats inside. Money will also be used to install an antenna and bat counting system to monitor the population.

A new gate has already been installed at the entrance of the cave to let bats in and keep people out.

Bat research is important to help understand white-nose syndrome, a disease caused by a fungus that’s ravaged bat populations around the country.

A project in Sturgeon Bay will help the community get more in touch with its coasts. The city received a grant to build a walkway that goes through Sawyer Park and under the Oregon Street Bridge to meet up with the walkway near the Door County Maritime Museum.

The project will also add historic markers that explain the history of the Coast Guard and navigation issues, as well as build a meeting area with benches and more parking in Sawyer Park. The grant will also help fix drainage issues at the park.

“We’re trying to make Sawyer Park more user friendly,” said Marty Olejniczak, Sturgeon Bay community development director. “There’s not a whole lot of reason to go down there unless you’re a Coast Guard aficionado and want to get close to the boat.”

Olejniczak said the project design still has to be approved by the Parks and Recreation board and the City Council, and he is waiting on comments from the Coast Guard and fishing tournament organizers. 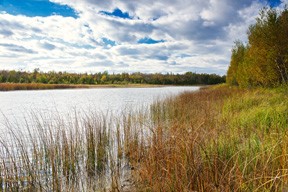 The Mink River estuary is a unique place, even among the numerous land preserves in Door County. The estuary is a wetland where water from the Mink River mixes with Lake Michigan, and it provides a habitat for numerous plants and animals, including some endangered species.

A grant was awarded to the University of Wisconsin-Extension to study the groundwater that flows into the estuary.

Maureen Muldoon, associate professor of geology at University of Wisconsin – Oshkosh, is working on the project. She said to think of the estuary like a hose filling a swimming pool. You can’t protect the pool without protecting the water that’s filling it up.

“You need to think about where that water is coming from,” Muldoon said.

The flow model will help determine where the groundwater comes from, how quickly it flows and what it flows through.

Although she insists almost a million gallons of water isn’t much considering the amount of people that visit Peninsula State Park in July, Shaili Pfeiffer is working with a team to bring that number down. The DNR won a Coastal Management grant to find ways to save water at the park.

Pfieffer expects to find that the park’s old, leaky showerheads and toilets waste a lot of water, but said replacing them is a simple and cheap fix. Auditors may find that underground pipes are leaking water too, and that would be a more expensive repair.

Beyond reducing water use at one park, Pfeiffer said the project will educate visitors about conserving water and help the DNR save water across the system.

“There’s a million people that go to the state park – and there’s over 50 state parks in Wisconsin – and this is a really good opportunity to figure out how you can reduce water use at a state park and then translate those results across the system,” Pfeiffer said.

The Town of Washington Island received funding to develop a plan for the Detroit Harbor area of the island. The town has contracted with engineering firm SmithGroupJJR to create the plan.

“They will do the outside thinking on the future, the ‘what ifs’ and what the potential could be,” said Joel Gunnlaugsson, chairman of the town of Washington Island.

Gunnlaugsson said the town will create an ad hoc committee to address the possibilities for the area, like new business development, renovations, or others.

“Anything and everything is fair game,” Gunlaugsson said.