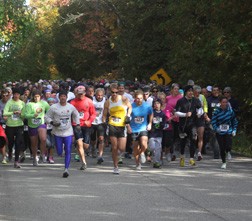 Run Wild co-director Pat Saladin said, “Run Wild started 25 years ago by one of the park staff [retired Potawatomi State Park superintendent Arnie Lindau]. It was canceled in 1994 because, I believe, of the time commitment. It was started up again by Bill Scholten in 1995 and he remained the director up until 2010. In 2011 [Saladin], Carol Mulinix and Tina Stawicki took over as co-directors. [It’s] a lot of work for three people and Bill Scholten pretty much ran the event by himself along with several volunteers for many years.”

Hard work from the organizers and volunteers has made Run Wild a lasting event with steadily increasing participation numbers. Saladin said at last year’s event there were 600 runners/walkers, and they’re expecting 750 participants for the Oct. 5 event.

The appeal of Run Wild is its inclusiveness to all ages and athletic ability. Along with the 10K and three-mile run/walk, a 1/3 Smokey Bear fun run is held to include children ages 2 to 10 years old. [A note to parents: If you have a wily toddler participating, you may accompany them during this run.] 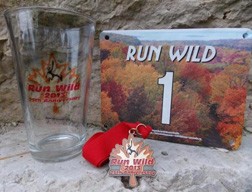 As part of the 25th anniversary commemorative bibs, medals and glasses will be given to race participants.

Saladin said, “We also have some very good runners that do this every year, so it is competitive. We are getting people from all over the Midwest, and several from as far away as Florida and the state of Washington.”

One of those runners who participates year after year is Dennis Naidl of the Green Bay area. He’s run in all 24 events, and plans to run his 25th this year.

Run Wild has become a Door County tradition for Naidl, who says, “What draws me back is the opportunity to enjoy a fall day in Door County and, at the same time, help to support Potawatomi State Park. I even ran the course the two years the run was cancelled due to DNR restructuring and the bad wind storm.”

After a little reminiscing Naidl continued, “I really don’t remember much of the first run. It was probably a little nervous anticipation about the course after driving down the big hill to the start area. One of my most memorable moments is running through a section of the course – an area with maple trees loaded with yellow leaves. When the sun hits that area it’s like running through heaven.”

As part of the anniversary running, finishers will receive a 2″ die- cast commemorative medal, division winners receive a Run Wild commemorative pint glass, and all runners will sport a custom, souvenir bib. There will also be an anniversary quilt on display with patches made from every t-shirt since the beginning of Run Wild in 1988.

On the morning of the run, the park entrance fee is waived. Event organizers encourage participants to ride their bikes to the park to help with traffic issues; everyone who rides their bike will be eligible for a special door prize.

The 10K and three-mile run/walk begins at 10 am and the Smokey Bear run begins at 11:15 am. To register, download a form from runwild.org or visit active.com. People can also register at the packet pick-up on Oct. 4, 3 – 7 pm, at Nor Door Sport and Cyclery, 60 S. Madison Avenue, Sturgeon Bay. People may also register on Oct. 5 at the site of the run at Potawatomi State Park. For more information visit runwild.org.