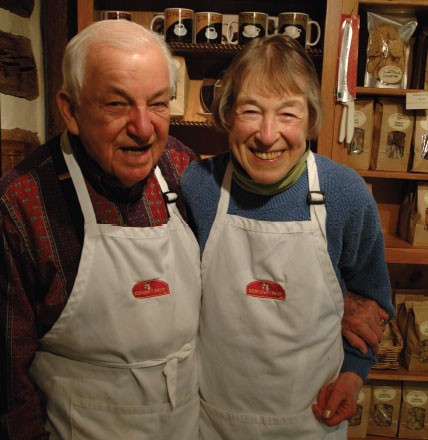 When most people retire, they opt for a quiet life of leisure and relaxation. This has never been the case for Larry and Eunice Manz, former owners of Manz’ Specialty Foods in Sister Bay. They have just begun their second round of retirement after selling their store last year. However, instead of finding them on a golf course or enjoying the gorgeous view of the bay from their house, they are working again. The next time you order a coffee from the Door County Bakery, you may find that Larry is your barista and that Eunice is just beyond in the deli. Of course, it doesn’t really seem like work to them. They still have the joy of talking to customers and guiding their food and beverage selections; the only difference is that when the lights go off, they get to go home without having to worry about any of the behind the scenes details of running a business. In their view, they have the ideal set-up.

After twenty-three years of having a store, they have certainly seen a lot of people come through the county, tourists and locals alike. They exchanged numerous smiles with one another as they recollected some of the questions and requests they’ve had over the years. Larry’s most outrageous request was a woman asking him to slice some Brie really thin. It was hard for him to keep a straight face then, but he can chuckle freely now. One of the most commonly asked questions by customers was “does the shrimp come out of the Green Bay water?” Between questions about Brie and shrimp, people coming into the store also shared their life stories with Larry and Eunice. “I was amazed at how much they actually told us!” Eunice said with a little laugh. Good thing part of their customer service policy was the ability to keep a secret.

Customer service was a keystone to their success. During the early days at the Country Walk Shops, they were the only store located there. Until they built a following, Eunice would ride her bicycle around the parking lot. If one car arrived to shop, she would let Larry handle it. If another car arrived, they were in business and Eunice would cycle over to help. They knew what it took to succeed in the food trade from owning a store in Cincinnati for five years. Larry and Eunice were big believers in offering quality goods and backing it up by making sure the customer was always satisfied. It worked, both here and in Cincinnati. So well, in fact, that the UPS manager in Ohio had to send a special truck just for their custom shipments. It did not take long for their gourmet food baskets to gain a fan base here either, and the Manzes even took requests to ship baskets to Japan, Sweden and Australia.

When asked if there would now be time for travel, they replied that they are exactly where they want to be, here in Door County. Having already been to places all around the world from Germany to Japan and many spots in between, Larry and Eunice can appreciate the Door County lifestyle even more. “I like the slower pace up here,” Larry explained. “While visiting my daughter in California, I noticed people were passing us on both sides and we were going 80 miles an hour! I had to make sure that my daughter didn’t have the car in reverse.” Not likely to happen on the drive from their home in Egg Harbor up to Sister Bay. Eunice added, “We have traveled all over the world. We really want to enjoy our home now.”

The two tails of Highway and Bair wag from time to time as they seem to listen in on what Larry and Eunice have to say. Bair, a Norwegian Elk Hound, spent a lot of his dog years in the back office at the store and did not quite take to retirement either. Used to seeing the Manz’ employees all day and given the odd leftover gourmet item, he was reluctant to give up the life of a shop dog. Once away from the shop, Larry and Eunice noticed that Bair was lonely without the constant bustle. That is when Highway was added to the family. Highway, a large Shepherd and Collie mix, was at the Humane Society when Larry and Eunice went looking for a pal for Bair. “They were just wonderful [at the Humane Society],” Eunice enthused. “They interviewed us and our vet to make sure that we were worthy of Highway.” They clearly were and Highway made himself at home.

It is easy to see why customers want to spend so much time with this couple of 25 years. They are friendly, open and very willing to help. I even went so far as to suggest to Eunice that she conduct a seminar on customer service. She modestly laughed and said that she doubted that people would come. I disagree. We could all learn a lot from Larry and Eunice about how to work hard, how to enjoy life and how to simply never stop going.