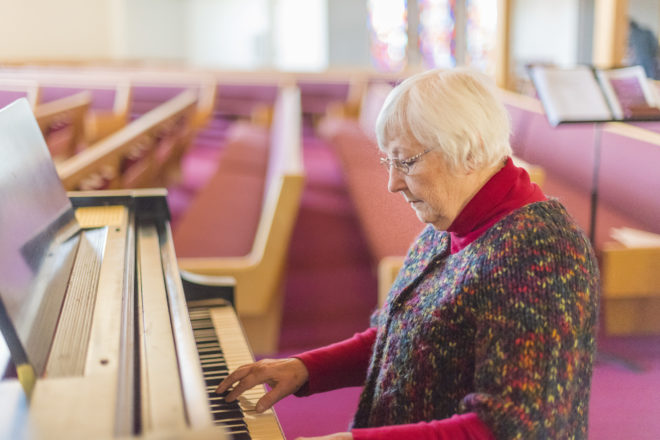 by Jim Honig and Judith Jackson

In September 1992, Shepherd of the Bay Lutheran Church invited Gladys Austgen to serve as organist and choir director.

Now, 26 years later, the congregation will honor Austgen’s retirement with a celebration on Sunday, Sept. 2. There will be a rite in the 9:30 am worship service, and then a brief ceremony of honor and recognition after the service. Following that ceremony, all will be invited into the fellowship hall for food, drink and a chance to share personal words of congratulation and blessing with Austgen.

When Austgen began her tenure at Shepherd of the Bay, an electronic organ was the instrument available for her to inspire congregational singing and lead the liturgy. It served the church’s needs for many years until one Sunday at a time, it began to lose its voice, one stop after another and then the organ quit completely.

Gladys was not defeated, but moved her talents to the upright piano in the sanctuary and continued to lead the worship services with spirited and enthusiastic playing.

After the Dobson pipe organ was installed, and years later when Greg Beem was brought on staff as the principal organist, Austgen became the Minister of Music, which included conducting the Shepherd of the Bay choir and serving as the pianist for the second service. 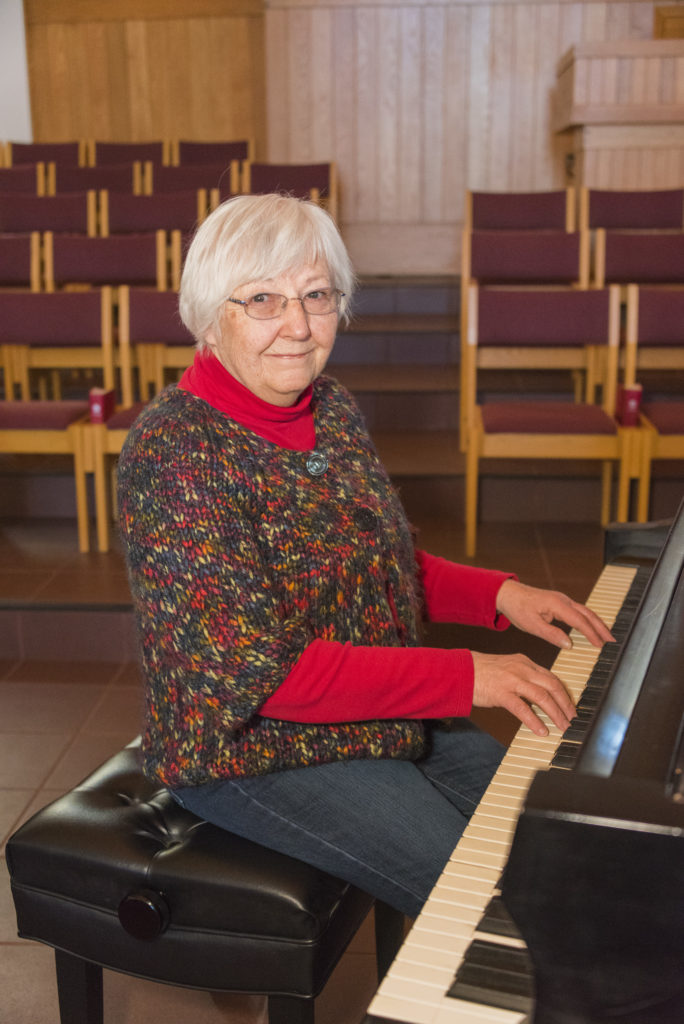 The seasonal choir became a year-round choir at Shepherd of the Bay, when Austgen proclaimed the summer season as “Choir Lite” and invited all interested singers to arrive a bit earlier than the posted worship service time, rehearse the anthem for 20 minutes and then sing the selected music in the service.

On any given Sunday, the choir seats were filled to capacity with the beautiful choral sounds emanating from the west wall. This contributed greatly to the high quality of worship at Shepherd.

During the rest of the year, Austgen led regular Thursday evening rehearsals marked with hard work, dedication and laughter.

One of the beauties of Gladys Austgen’s many gifts is her extraordinary talent at the piano, especially her ability to improvise accompaniments and preservice music.

For years she provided the primary inspiration for the style and joy of the second service, which many affectionately called the Contemporary Service. She occasionally collaborated with other instrumentalists, was often supported with a group of singers, and always encouraged the worshipers to enter into the spirit of joy that she elicited.

Austgen has many gifts, but perhaps her greatest talent is the gift of inclusion. She has enthusiastically invited visiting musicians to participate in the Sunday services, especially guest musicians who are in Door County for the annual Peninsula Music Festival.

Members of the community are invited to join Shepherd of the Bay members for the celebration to honor Austgen and her 26 years of exceptional ministry in which she has set the standard for the outstanding tradition of Shepherd of the Bay’s music program.