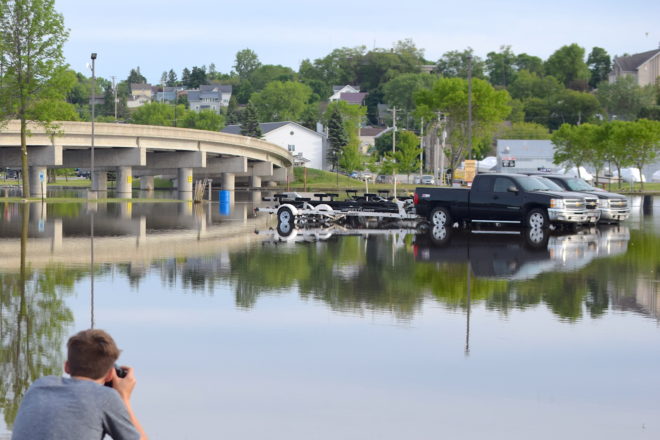 Lake Michigan’s record-high water levels are eroding shorelines, causing problems with docks and leading to flooding in some river systems every time there’s a significant rain event. But last week’s announcement that the public boat-launching ramps in Kewaunee would be closed beginning July 1 was a shock to hundreds of anglers and the dozens of businesses that rely on them.

Hold on to your fishing pole, though – you can still fish the popular port.

“The City of Kewaunee is committed to sportfishermen and our business community,” said Tom Kleiman Jr., owner of Accurate Marine, Tackle and Storage in Kewaunee. “It’s too early to say if this high water is going to be a short-term deal or not, but it’s on our radar, and we’ll be working with the city on some ideas moving forward.”

Kewaunee city officials worked out a deal with the City of Algoma that allows those who purchased Kewaunee season passes to use the public launch at Algoma Marina, but Kewaunee Marina manager Andy Holzem doesn’t think it’ll lead to an exodus.

“We didn’t sell a lot of season passes this year,” said Holzem, who noted that the high water had many anglers waiting to see what would happen.

Meanwhile, Chad Lamer, manager of Salmon Harbor Marina in Kewaunee, said he’s opening his boat launch – which is normally private – to anglers for a daily or seasonal fee.

“It’s not going to be very easy, but we kind of have to,” Lamer said. “Where are these guys [who are] camping or staying at the hotels going to go?”

Although the public marina has 90 seasonal slips and 10 more for transients – plus spots for four large boats along the harbor wall – Salmon Harbor has 127 slips, including 30 for transient dockage.

That’s good news for anglers looking to fish the popular port for the 37th annual Kewaunee/Door County Salmon Tournament July 19-27. Kewaunee typically sells more than 700 tickets for the event, which lures about 3,000 anglers to the Kewaukee/Door peninsula each summer.

Holzem said the decision to close the city boat-launch site wasn’t easy, but it was necessary because of safety and infrastructure concerns, including craters in the parking lot and a compromised electrical system.

Busy weekend on the water

If the weather cooperates, the July Fourth holiday weekend is typically one of the busiest of the year at most ports.

The U.S. Coast Guard and Department of Natural Resources’ Marine Enforcement Unit will be increasing patrols during the long weekend as part of Operation Dry Water (operationdrywater.org), a national Boating Under the Influence (BUI) awareness and enforcement campaign.

BUI can be as deadly as drinking and driving a motor vehicle on land. In fact, studies find that a boat operator is likely to become impaired more quickly than a land driver, drink for drink. Alcohol affects judgment, vision, balance and coordination – impairments that increase the likelihood of accidents afloat for both passengers and boat operators. Additionally, even low amounts of alcohol consumption can increase the risk of drowning.

The birds and the bees

Pollinators are important wildlife. There are hundreds of thousands of pollinators – mostly insects, but also birds, bats and small mammals – that make an enormous difference in our daily lives, helping to produce our food, create scenic natural areas and provide viewing enjoyment.

Pollination – pollen being moved within a flower or carried from one flower to another of the same species – is a critical stage in the life cycle of all flowering plants because it leads to fertilization, which is necessary for healthy and productive native and agricultural ecosystems.

You can help pollinators by reducing or eliminating pesticide use and adding native flowering plants that supply nectar, pollen and homes for pollinators. Learn more at pollinator.org.

There are dozens of live cameras available to watch wildlife action in real time on computers, phones and tablets, including some with night-vision capabilities.

One of the newest – a live feed from a snowy owl pair’s tundra nest site in Alaska – is courtesy of the Owl Research Institute (owlresearchinstitute.org).

Meanwhile, if you want to learn why the turtle crossed the road, check out wiatri.net/inventory/witurtles. Wisconsin turtles are on the move, leaving streams and rivers and crossing roads to reach upland areas to lay their eggs. The DNR and partners want to hear about your sightings.