Now in its 28th year, the Dairy Breakfast, sponsored by the Sevastopol High School Future Farmers of America (FFA) alumni, serves anywhere from 3,500 to 4,400 people. 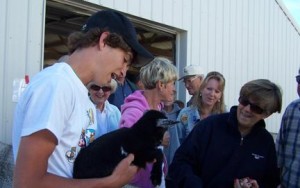 The petting zoo at the annual Dairy Breakfast adds to the agrarian allure of the event. Photo courtesy of Mary Gilbert.

But when people arrive to eat breakfast on a dairy farm, or this year on July 5th at the Valmy Thresheree Grounds, they haven’t come just for the pancakes and omelets. They are connecting with the agrarian past upon which this nation was built and with their own roots. This could be the meal that great-grandma made in her farm kitchen. And the calves that they show their little ones could have belonged to great-grandpa.

For a time under that huge tent being served by young Future Farmers and Boy Scouts, they are all a community of farmers, and with each mouthful of ham and eggs, they are celebrating a way of life.

Helen and Dan Ploor, whose farm is only a stone’s throw from Sevastopol School, have been involved with the Dairy Breakfast for 25 years, and for the last 15 have organized the event with the help of many people, Sevastopol High School agriculture instructor Dale Carlson, the 100 members of the FFA alumni, the Sevastopol FFA and their parents, along with the Southern Door FFA and a Sturgeon Bay Boy Scout troop. The Extension Office in Sturgeon Bay also provides assistance.

While dairy breakfasts occur during the month of June throughout the state, this one is unique in that it is sponsored by an FFA Alumni group rather than the county.

A 40 by 140 foot tent with a seating capacity for 500 is set up the day before the breakfast, but most of the work, Helen said, begins at 4 am on the morning itself as the first diners arrive at 6 am. “We have to get the coffee [donated by Door County Coffee] going,” she said, “set up tables and chairs, put out salt and pepper and butter and juices.”

And it wouldn’t be a dairy breakfast without 4,500 half-pint cartons of milk and 3,500 ice cream cups.

One of the FFA alumni has a refrigerated truck that he lends for the breakfast, and Schwan’s brings the ice cream in a freezer truck. 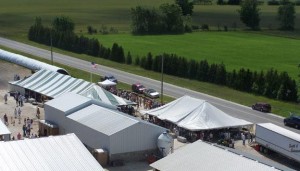 A view from the silo at a previous FFA Dairy Breakfast. Photo courtesy of Mary Gilbert.

Those who attend the breakfast marvel at the efficiency of the event. The ham and cheese omelets cooking in five-foot round frying pans keep up with the lines of people who move quickly along the serving tables and then find eager wait staff who bring them beverages and seconds of food.

Dan estimates that 75 – 80 percent of their customers are tourists and seasonal residents, many attending the event each year.

After breakfast, diners may listen to live music by the Modern Day Drifters, visit the farm petting zoo, or go on a horse drawn wagon ride, all for the $8 meal ticket (toddlers free). And they may feel satisfaction that the money is going to a good cause, helping to perpetuate agrarian lifestyles.

The FFA Alumni awards graduating Sevastopol seniors 13 scholarships totaling $11,500. Funds also are used to send students to national conventions and leadership conferences, to subsidize student purchases of FFA jackets, to maintain the school greenhouse, to buy engines for the automotive class, and most recently to create a one hole putting green for a golf course management class.

Agriculture classes have changed since Dan Ploor was a student at Sevastopol High. Then, yearlong classes focused on aspects of dairy farming. Now most of the classes are a semester in length, he said, with such varied agricultural subjects as greenhouse maintenance, floral design, landscaping, care of small animals and of large animals.

And the once male dominated agriculture classrooms have changed, too, as girls are well represented.

But farming also has changed in Door County. Dan estimates that only 25 dairy farms now are operating north of Sturgeon Bay, and he anticipates that the number will drop to 15. While once dairy farms were located the length of the peninsula, now they are only found south of Baileys Harbor.

The dairy breakfast was moved this year from a working farm to the Valmy Thresheree Grounds for lack of a host farm. The pool of farms capable of hosting the event is small and each has already taken a number of turns.

However a full spectrum of dairy farming is still represented north of Sturgeon Bay, from three large dairies milking herds of over 500 down to 40 head herds in stanchion barns. Some are organic dairies, and one farmer is seasonal, milking from April to December and using rotational grazing.

“I think dairy farming is a good way to live,” Dan said. “You’re your own boss. We’ve raised seven kids on the farm. I’ve enjoyed it. It’s not an easy life, but it’s a good place to raise a family.”

“I agree full-heartedly,” Helen said. “When our kids applied for jobs, they were told farm kids would always be hired. They have the work ethic employers are looking for.”

The Ploors hosted the breakfast twice before they retired from dairying in 1996. They still live on the family farm that now raises beef animals and is managed by their son Abe and his wife Kristi, the third generation on the land. Next door lives Dan’s 94-year-old mother.

She, too, is involved in the dairy breakfast, as she still wraps all of the silverware in napkins for the event.

The Dairy Breakfast this year is served Sunday, July 5, (rain or shine) from 6 – 11:30 am at the Valmy Thresheree Grounds at 5005 Country View Road, all you can eat for $8, six and under free. Watch for direction signs on both Highways 42 and 57.