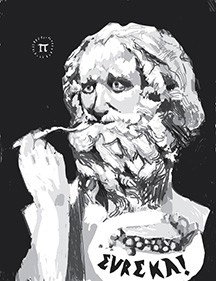 The number is said to be infinite, expressed as a fraction 22/7 or 223/71, both work well enough. The Path of the Beagle site says “pi is infinite and non-repeating,” currently calculated to 10 trillion places. The author of the site comments in that string of digits is the name of every person who ever lived, as well as the date and manner of their death. There is something a touch eerie about pi.

The illustration demonstrated precisely what a math geek is good for. To point out gene sequences do well enough with just four variables, A, C, G, T, to the gain of every species on earth.

Despite pi is calculated to 10 trillion places we really need only 39. The diameter of the known universe is 8.8 x 10 26 meters, multiply by pi yields a circumference of only 39 digits. So why do people who ought have better things to do figure pi to 10 trillion places?

Archimedes, that old white guy, is credited with the creation of the ratio of the diameter to the circumference, what we call pi. A standing argument exists, whether the Greek letter stands for periphery or perimeter, the 16th letter of the 24 character Greek alphabet.

Archimedes gets the classroom credit for pi because he is the most convenient geek to hang the blame on despite pi as a construction concept was known in both Babylon and Egypt 4,000 years ago. If perhaps to wonder why we follow the precepts of a tribe as didn’t do math, didn’t do pyramids, or libraries, or pi, and who simplified the Godhead to a monopolistic corporation instead of a lousy intrigue-filled ugly rabble of gods who acted pretty human including the fist fights and sex. If they also allowed women their fair share of time on the throne.

His second volume explores volume of granary storage, to suspect this bit of math played an important role in the marketplace forces of the Valley of the Nile, to calculate the volume of grain silos.

In volume three, Ahmes continues his computations involving bread and beer and how much feed is necessary for fowl and oxen. Feed to weight-gain efficiency, not so geeky. Sounding like any modern Extension researcher.

So go celebrate pie day, the choice is yours, “an apple, a pear, a plum, a cherry, anything to make us all merry.”