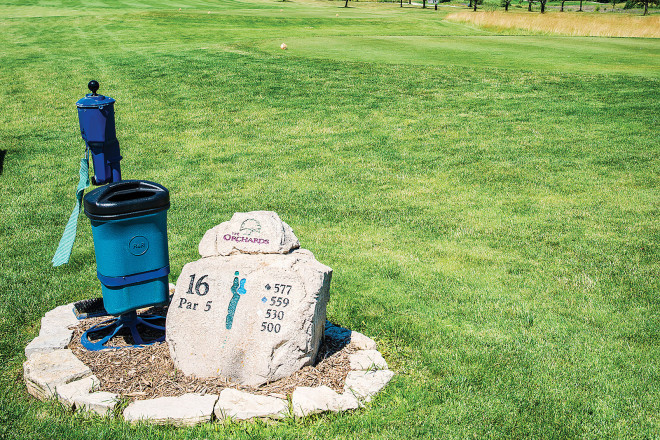 As a county, the Door Peninsula provides almost everything to tempt golfers’ desires. Between the short and sweet par-3 course and the elegant country club lays an assortment of courses, holes, bunkers and greens adding to the lore of the vacation hotbed. Beauty is just part of the everyday attraction.

But the game of golf can’t always be beautiful, at least not if one is attempting to shoot a personal record or best their buddy in a match. At times – even in illustrious Door County – the prettiest golf stroke can turn ugly at the hand of a certain hole.

According to 20 golf minds throughout the county, these holes are the most devilish Door County has to offer. In no particular order they are:

No. 16, The Orchards Golf Course 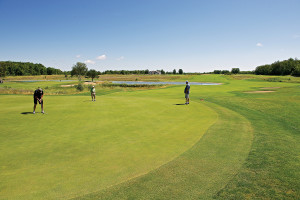 Most of the time, par fives are welcomed with open arms by all kinds of golfers. But Hole 16 at The Orchards isn’t like most par fives.

Posted near the end of the scorecard, within seeing distance (and well within smelling distance) of the clubhouse, No. 16 helps drift a golfer’s mind toward his post-round schedule. Disclaimer:  this is a trap; there’s plenty left to be settled on the golf course.

For starters, each of the four tees at The Orchards stretch to 500 yards or longer and make this behemoth the course’s longest hole. And all things considered, standing on the tee box might be the best part about golfing No. 16.

A relatively wide, downhill fairway extends straight out from the tee, blanketed on each side by a thick fescue territory. A good drive is sent bounding down the hill, right where things start to get dicey. 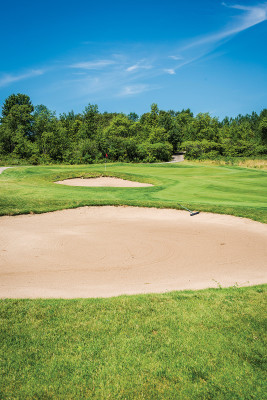 “What makes [No. 16] so difficult is not the tee shot, but the second shot,” Orchards general manager Jack Jackson said. He consistently has a clear view of the hole from behind the pro shop desk. “If your drive is long enough, you may attempt to get home in two, but if you aim directly at the green, more water comes into play, and a lay-up shot is also treacherous.”

The water he notes, marginally, is probably worthy of a higher remark. It’s a four-acre lake of sorts that sits between the holes 16, 17 and 18 and leaves golfers in the position to “get home in two,” like Jackson said, or “lay-up.”

To lay-up, however, takes a defined iron shot to a thin landing strip guarded by sand traps. Pick your poison; regardless, an extremely layered green waits after an uphill pitch. As if that wasn’t enough, a hurting wind generally makes this monster play closer to 600 yards. Best of luck! 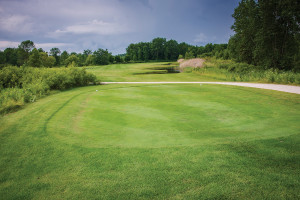 Just as No. 16 at The Orchards can ruin the end of a good round, No. 5 at Idlewild can ruin a round almost from the start. A series of four easier, warm-up holes precede this tricky par four.

A doglegging fairway calls for a subtle left-to-right ball flight, but be careful to avoid a slice. Lining the right side is a marshy water hazard where golfers not only lose strokes to penalty, but possibly balls, shoes and playing partners to the impervious, swamp-like thicket. So keep it straight or left, which oddly seems easy enough.

Unfortunately, anything driven left of the devious right edge greatly lengthens the ensuing approach shot, likely the most important for a golfer wishing to par the toughest hole on the course.

A lengthy look toward the pin might leave golfers to forget about their final foe – a small creek yards short of the landing zone. The creek is tiny, but wide enough and close enough to the green that a lay-up shot in concerns of safety is the realization that many golfers are forced to find. 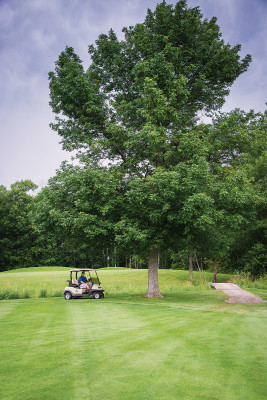 And from the fairway, the green appears rather flat – a single, noticeable niceness. However, there’s also this 100-foot tree that golfers must dodge left of while grabbing a hint of the green without grabbing the lone greenside bunker. There is plenty of room to ruin a round all over No. 5.

In sizing up the hole against the toughest in the county, University of Wisconsin – Green Bay golfer Cam Fuller doesn’t think there’s even a comparison.

“Number five is much tougher,” Fuller said. “I’ve seen plenty of people dump balls in the water right or lose their ball left or come up short of the green and go in the hazard.”

Zones of danger prompt decisions, and among the many obstacles, No. 5 at Idlewild forces golfers to meet their decision quota far before they reach the green. From there on, it’s really anybody’s guess and, many times, everybody’s story.

“It’s sometimes the topic of discussion after a round in the Pub and Grill,” Idlewild Head Golf Professional Randy Meyer said. “This hole has singlehandedly spoiled many good rounds.”

On the topic of the toughest holes Door County has to offer, No. 12 at Peninsula State Park tends to ring a bell, literally.

No. 12 is known for its iconic bell, placed 240 yards into the fairway, out of the golfers’ view from the tee. A ringing bell is a sign from the group ahead that they are out of driving range. Then the fun begins.

The dogleg left par four — measuring 392 yards from its furthest tee — is never difficult due to its distance. The key to parring this hole is about control, the entire trip from tee box to green.

The climbing tee shot must stay centered with a forest of maple, pine and oak trees lining each side of the fairway. Any wavering from the beaten path will leave a golfer with beaten slacks and beaten dignity.

From the fairway, No. 12 seems to ease up. The short grass slopes to the green and invites golfers inward. It’s a welcoming sight after splitting the tree lines, but these open arms can be deceiving.

It was mean enough to ruin John Parent’s chance at winning the Resorter’s Match Play Junior Division back in 2005. Though the details aren’t exact in his memory, the thought of No. 12 spikes the notion of a tournament that got away from him.

“I think I had a double bogey on th 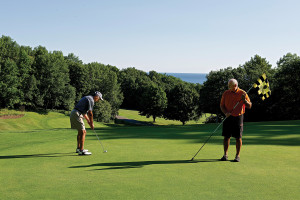 at hole, and it kind of choked me,” Parent, a recent graduate of the University of Wisconsin – Madison, said. “I think I hit the ball too far after the dogleg, took two shots to get out, had to chip on and two putt for a six.”

No.12 at Peninsula State Park shows golfers that it doesn’t take a bunch of hazards to loom as one of Door County’s toughest. It’s simple, it’s robust, but it’s also unkind. It’s the final leg of what some golfers consider the toughest stretch of holes in the county.

“Golfers do mention that if they can get through 10, 11 and 12 at even par, things are looking good for the rest of the round,” Jason Daubner, head golf professional at Peninsula, said. This means progress, simply by surviving a three-hole stretch.

The three toughest holes in the county are evenly dispersed in the county and on the course. One is at the beginning of a round, one in the middle and one at the end. One is in the southern part of the county, one in the middle and one on the northern side. No matter how many rounds they ruin, be they filled with birdies or simply fewer bogeys, find solace in the fact that there’s always another week, month or year to face the challenges of these holes.