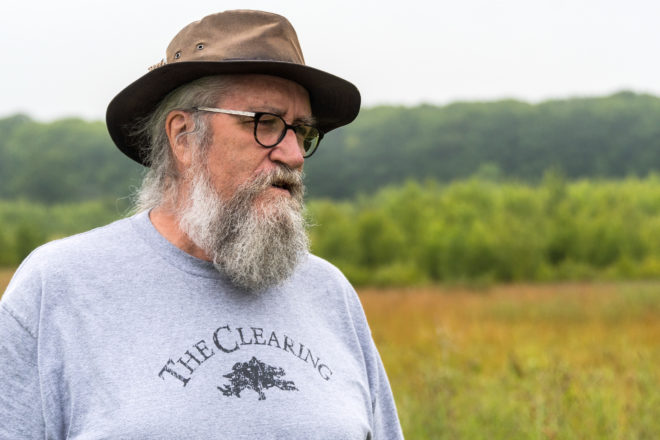 Our peninsula was lucky. The Paleo-Indians, who first lived here about 2,000 years ago, were primarily hunters and fishers who did little to disturb the primeval forest.

That changed beginning in the mid-1800s with settlement and farming, but the forest has since reclaimed Door County. According to Jake Schroeder, a forester with Wisconsin’s Division of Forestry, 48% of Door County is now classified as forest, ranking it 24th among the state’s 72 counties.

David LaLuzerne, a self-described herbal pharmacist and forager, spends a lot of time in the woods of Door County.

“If you take away trees, a very important part of the entire ecosystem is eliminated,” he said. “After that, it would be a chain reaction until everything was gone.”

During the 1970s, LaLuzerne was in the last class at the UW-Madison School of Pharmacy that was required to take a course in pharmacognosy, or the study of medicinal drugs derived from natural sources such as plants. He became more interested in incorporating herbal remedies – the source of natural healing – into his life and career.

The focus on medicinal plants led LaLuzerne to open three Green Earth vitamin and herb shops in the Madison area that he operated for 20 years. And based on his travels in the U.S., China, Peru and throughout Europe, he produced 120 episodes of HerbTV (herbtvonline.com) that gained 1.2 million views on YouTube. He recently donated the entire collection to the American Botanical Council.

Since 2014, LaLuzerne has been “retired” in Ellison Bay, but at least half of his time is devoted to his work as an herbalist. During the winter, he teaches classes at The Clearing, and interest in those classes led to the walks he leads to introduce people to the herbs and mushrooms growing in their environment that can be used to maintain health and well-being.

Although various herbs are beneficial to certain parts of the body, LaLuzerne is concerned about advertising that portrays compounds of herbs and mushrooms as cure-alls for nearly every human ailment. Most of these ads, he said, are based on limited and/or unrelated research.

In contrast, he is intensely committed to raising awareness of the value of herbs and mushrooms not as medicine, but as food that helps to strengthen the ability of the body’s immune system to protect the body from bacteria, viruses, parasites and fungi that cause infection and disease.

Forests provide habitats for about 90% of all the earth’s species, both plants and animals. Scientists say that forests are “reserves” for the genes of biodiversity, and those reserves require immediate, ongoing remediation.

“It’s like what is happening with farmland,” LaLuzerne said. “If we don’t start regenerating it, it’s estimated that we have only enough usable farmland in the world for 60 more harvests.”

Many of us will have great-grandchildren alive in 2082. If we do nothing, what will they eat?