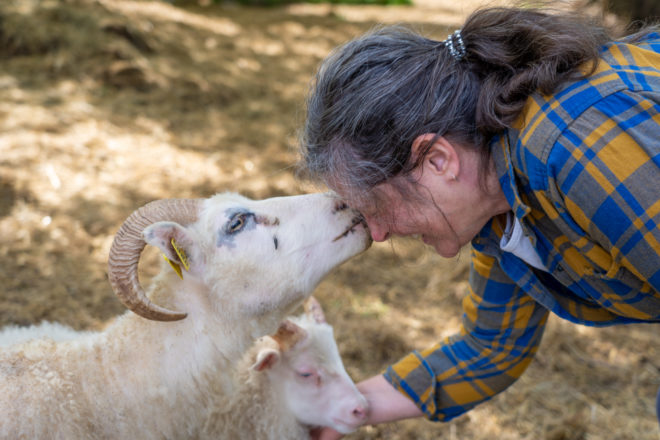 “Each sheep has their own personality,” Amanda Brooker said of the flock of Icelandic sheep that she and her husband, Joe, shepherd. Becoming a shepherd wasn’t without its share of tough lessons, but Amanda enjoys the reward of the relationships she’s formed with the animals under their care. Photos by Rachel Lukas.

Amanda and Joe Brooker walked across their property near Potawatomi State Park to the pasture where their flock of sheep was grazing. Buck, the resident livestock guardian dog, announced their arrival with deep, booming barks that would keep any potential four-legged – or two-legged – predator at bay.

If you had asked Amanda, who has a background in marketing, and Joe, a high school principal in Green Bay, whether they ever saw themselves becoming shepherds, the answer would have been yes – and no.

“Amanda had kicked around the idea of getting goats, and I always said, ‘No way. We’re never going to have goats,’” Joe said.

But buying your dream property in rural Door County – coupled with months spent at home during the pandemic and the free time it provided to kick around new project ideas – has a way of providing the catalyst for doing things you said you’d never do.

“So I found some goats on Craigslist,” Joe said, laughing at the irony of his purchase.

“But the idea,” he added in his defense, “was we would use the goats for clearing the brush around the property. But then I saw another ad on Craigslist for sheep.”

That ad sent Joe down a rabbit hole of researching sheep – the various breeds, uses and care requirements – and that eventually led him to Icelandic sheep: one of the world’s oldest and purest sheep breeds.

“What you see here is essentially how these sheep have looked for a thousand years,” he said.

The cold-hardy, mid-sized breed has a short-legged and stocky stature, and their faces and legs are free of wool. In fact, at first glance, their primitive appearance may cause someone who’s unfamiliar with the breed to mistake them for goats, especially if the sheep have recently been shorn. Their dual-coated fleece comes in a range of colors, including white, brown, gray and black. Rams average between 180 and 220 pounds, and ewes between 130 and 160 pounds, so although they’re substantial, they’re still a manageable breed for newbie shepherds.

The more research the Brookers did about the breed, the more they realized they were an ideal fit for their property, location and agricultural goals.

“Knowing that we didn’t have a barn, and we weren’t experienced farmers or shepherds, we needed something hardy that would thrive in our climate,” Joe said.

Icelandic sheep are also naturally short tailed – another mark under the “pros” column because that characteristic eliminates the need to dock the tails of any lambs born on the farm. The breed also has both horned and polled (no horns) strains. The Brookers’ first flock was polled, “but I, personally, find the horned variety more aesthetically pleasing,” Joe said.

So that initial flock was sold and replaced with the current horned variety. The rams, when grown, develop an impressive full double curl, while the horns on ewes create a sweeping, half-circle shape.

Starting – and then restarting – with their flock was just one of many lessons the Brookers have encountered on their journey. And although the learning curve isn’t without hours of hard work (and a few tears), the opportunity to grow as shepherds is also part of the appeal.

Prior to the sheep, keeping a few colonies of bees and tending to a small vegetable garden was the extent of the couple’s agricultural skill set. But a sense of curiosity, a willingness to learn and a love for adventure inspired the couple to go all in with not only keeping a flock of sheep, but also raising them for meat, wool and breeding.

For Amanda, marketing the breed is the easy part of her new role – not only because of her previous career in marketing, but also because Icelandic sheep are a triple-purpose breed.

“You can do milk, meat and fleece,” she said, “so selling the fleece, and then for the meat sheep, we get the hides tanned.”

“It’s the sad parts,” Amanda said. “When lambing goes bad, or if someone gets sick.”

There’s also a balancing act involved in raising any kind of livestock, from how many animals a space can safely and adequately maintain, to how many you, as the shepherd, have time to care for.

“Last year was our first year birthing, and we went from 12 sheep to 22 sheep really fast,” Amanda said. “We were trying to balance the pasture, trying to keep them protected from the coyotes you could hear at night.”

To help maintain that balance, the Brookers employ rotational grazing, rotating the flock among three fenced paddocks, in addition to other grazing around other areas of the property with the use of portable electric netting.

Learning the animals’ diet, including grazing requirements and mineral needs that are specific to sheep, was another learning curve. The soil in Door County, and Wisconsin as a whole, doesn’t have large amounts of selenium, a mineral that’s necessary to the overall health of the sheep. So, because the animals are unable to get adequate quantities from the soil through grazing, their diet requires mineral supplementation.

Then there’s shearing the animals twice a year.

“The fall fleece is what’s considered the ‘money fleece’ that you sell for spinning,” Amanda said.

Because of that, the Brookers, after two seasons of attempting to shear the sheep themselves, decided to rely on a more experienced shearer. But from there, Amanda has been busy learning new ways to use and market their wool products.

“With the internet, you can learn anything, and one of my mentors is very into fibers,” said Amanda, who has taught herself to wash wool and then use it to needle felt, or, in the case of the lesser quality wool, make dryer balls.

Although Wisconsin is home to only a handful of Icelandic sheep breeders, the Brookers hope to be part of a movement to bring more awareness to the breed they’ve fallen in love with.

“We’re trying to get together to network, to buy from each other and mentor each other,” Amanda said, because if there’s anything a beginning shepherd needs to have in the tool kit, it’s dependable resources.

“It’s so important to find a mentor who can help you learn,” Amanda said. “And then, once you do, you can’t be afraid to learn and ask questions because every year you learn more.”

Visit longriflefarm.com to find out more about the Icelandic sheep at Long Rifle Farm.