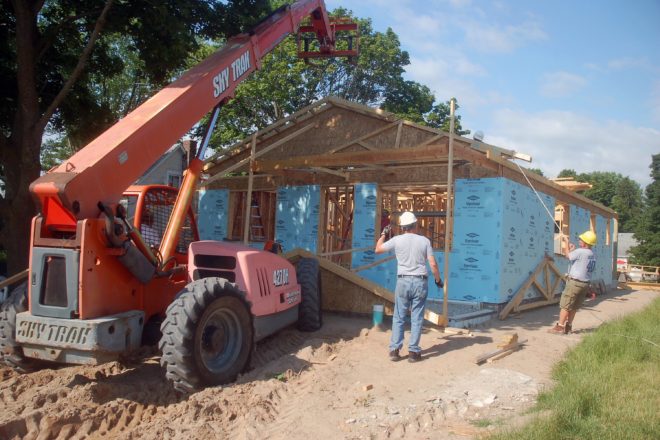 Tuesday was Truss Day at the future home of Kendra Clarizio-Bilodeau and her two children, Matthew and Elizabeth (El).

“I have a truss!” Kendra said as the first truss was muscled into place atop the frame of her future home by the volunteer builders with Habitat for Humanity of Door County.

“This is what’s going to make a difference, getting the trusses up,” Kendra said. “It’s getting more real every Tuesday and Thursday.”

Those are the work days for the volunteer crew building this 40th home in the Habitat for Humanity program since it began building homes in Door County in 1994. The organization is proud of the fact that owners of the previous 39 homes paid a little more than $65,000 in Door County property taxes for 2016.

Kendra points out that the seemingly endless rain has not affected the work schedule.

“It surprisingly has not,” she said. “We build Tuesdays and Thursdays and the rain has stayed away from those days. So far everything is on track. Right now it’s hot and sweaty. The days are long and the process is amazing. Every day is a learning curve. And have no fear. These guys have not taken a ‘no’ answer from me. They have taught me how to use a nail gun. I walked on here not knowing anything. And they taught me a lot. We’re going to know everything about this house.”

“It’s not just building the home, it’s making sure she has the skills to maintain the home,” Megan said. “As guys are installing stuff, they’ll show her how things work, so it’s about responsible home ownership.”

“It’s a wonderful program that I didn’t know much about until I was in it,” Kendra said. “Now they’re stuck with me. I’m going to be an advocate for future homeowners and help them with the process. There are a lot of details you don’t think about. Thank god, I have Megan.”

In addition to working for Habitat for Humanity, Megan has been involved in an epic remodel of her own home, with the help of her father, Gregory Dietz, who is also a volunteer on Kendra’s home. She said there is a lot of brain power among the volunteer builders.

“Chuck (Stone, site manager) is a retired engineer,” she said. “There’s a retired architect. My dad is a retired lawyer and educator. They’ve retired from all walks of life and know their way around a toolbox or are willing to learn.”

Part of Kendra’s passion for wanting to be an advocate for Habitat’s program comes from getting to know the volunteers, both the builders and those who support them.

“It’s teamwork,” she said. “They work so well together. Usually it’s the more hands in the pot the more confusing it is, but they work well together and know what they’re doing. Some volunteers, this is their first home they’ve done; some have done many. They are retired shop teachers. I have a social studies teacher that I had in school. We have people that have owned their own building companies. We have people who have worked as construction workers.

“It’s the passion and the heart of gold that’s inside of them that makes the house,” Kendra continued. “It’s one thing to change lives for adults, but what they are showing and teaching kids it’s a life lesson they will never forget.”

She said her kids helped nail Styrofoam on the sides and with the flooring.

“El also helps the site hostess, (Carrie Link),” Kendra said. “And everyone loves Matthew because of muscles. Things are hectic this week because he starts football camp.”

In addition to the excitement of moving into their own home in October, El is looking forward to having her own room and Matthew is excited about having internet access. Kendra mentions that her daughter said to her just last week, “This is going to be the best moment in my life.”

When Kendra asked why, El said, “Because not everybody gets to help build their own home.”

Interested in volunteering with Habitat for Humanity but don’t think you’re skills tend toward building? “If they don’t want to build, we provide lunch to the workers every build day. They can help with that,” said Megan Dietz. “We can use volunteers at the ReStore because that raises money to fund the house builds. We’ve got lots of ways people can help other than swinging a hammer.” For more information on the work of Habitat for Humanity and volunteer opportunities, visit doorhabitat.org.