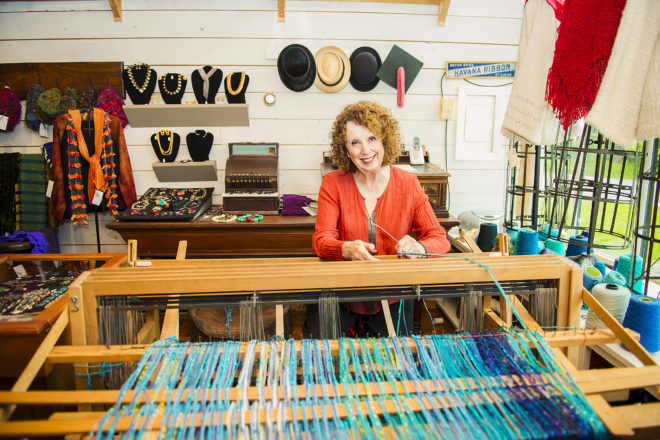 After 44 years with the Maple Grove Gallery, weaver Gloria Hardiman has packed up her brightly colored yarns and creations in favor of more travel and family time. Photos by Len Villano.

As Gloria Hardiman looks back on 44 years in her Maple Grove Gallery at the intersection of County F and Maple Grove Road, she said, “There are certainly more artists in Door County than there were in 1973, although I think there were more fiber artists then, at least ones who had their own galleries or showed their work regularly, as those in other media do.

“The art scene has grown and matured, and the sophistication has increased a lot. It’s a good area for arts in general – a very rich environment. I especially like the fact that some of the businesses – like Edgewood Orchard, Turtle Ridge and Ellison Bay Pottery – that were here when we came on the scene or began about the same time are still thriving.”

Gloria, a weaver known for creating luxurious items blazing with harmonious hues and unexpected little quirky touches, closed her gallery this month and sold the building that was once the old Nippert’s Store.

“The gallery had gotten to be a lot of work,” she said. “I’ll still be producing things on the loom in my home studio, but my schedule will be less intense and more flexible. George and I want to be able to do more traveling.”

When the Hardimans bought the old building – with no indoor plumbing – in 1973, they had four children, the younger daughter still in diapers. Now that girl has four children of her own. They live in Chicago, as does one of her older brothers. Another brother lives in Boston, and there’s a sister in Phoenix. “We have 10 grandchildren, ranging from high school age to college graduates,” Gloria said, “and we want to be able to take off and see them when we want to.” 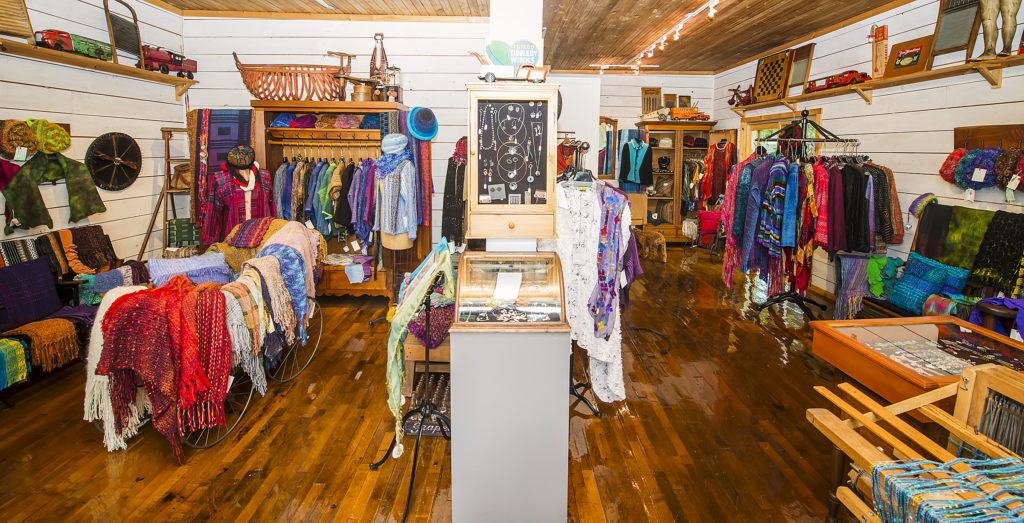 For the first 22 years, the family lived above the gallery in the summer, closing up after Labor Day and returning to their home in Urbana, Illinois. But in 1995, they bought a home nearby and became year-round Door County residents. “I hope to continue to be a small presence here,” Gloria mused, “but not on the scale I have been all these years. I want to do some different kinds of things, as well as the pieces I’ve been known for. But first, I’m going to take a break for awhile.”

Gloria said that, as she and George prepared the gallery for closing, “We had so many people coming in – good friends, people wishing us well, those who have supported us all through the years. Lots of them were purchasing things as mementos of the gallery. It’s been just delightful and very busy.”

Forty-four years of doing what she loves in a place she loves has created cherished memories.

“My life has never been compartmentalized,” Gloria said. “It’s the whole experience – finding this wonderful old building and all the things we did to make it grow (indoor plumbing), while keeping the feeling of the old general store by displaying antiques.

“Weaving is an integral part of who I am, so that’s certainly woven into the memories. Watching our kids grow up here and come to love Door County has meant so much. Although they’re spread over the country now, this is where they worked and made friends, and they still love to come back. Now there’s a third generation, and the grandkids come in the summer, working at Wilson’s, learning about the county and coming to love it.

“This place has worked for us in so many ways – just a fabulous experience!”