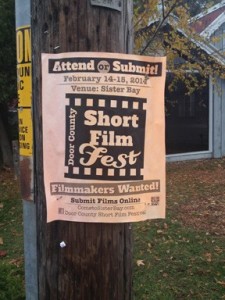 Filmmaker Chris Opper, organizer of the Door County Short Film Fest and founder of the North Ephraim Movie Theater, introduces a new filmmaking event to the peninsula – the 45 Hour Film Challenge, which will benefit the Short Film Fest taking place Feb. 14 and 15.

Opper, who studied filmmaking at Watkins College of Art, Design & Film in Nashville, Tenn., has taken part in a few similar events, including one in Green Bay. “They gave us one word – ‘legend,’ so we made up [a film] about a legend. There was a scuffle between this homerun-hitting champion and other guys. They end up clocking him in the head. It was a weird, little film, but it was fun.”

Similarly, the 45 Hour Film Challenge requires film teams to use “three ingredients” in their film, which can be between one to 15 minutes in length. “They will draw from a hat,” explains Opper. The ingredients may include any combination of person, place, or thing, “Like gasoline, a cloud, a tree,” says Opper.

The participating teams may include one person using their iPhone or a complete film crew using high-tech equipment.

At 7 pm on Nov. 8, the filmmakers are asked to register at the Sister Bay Village Hall and draw their three ingredients. “All are welcome,” emphasizes Opper. “Even if you are interested and don’t have a team, don’t have a camera, we will set you up.” A few actors who are not attached to a particular team will also be available to participate in the films.

Though Opper encourages creativity, he asks the content stay family-friendly. “We want kids and adults to be able to watch the films,” he says.

The films will be screened on Nov. 10 at 4 pm at Sister Bay Village Hall. The cost to participate is $25 at team, the cost to attend the screening is $5 for adults and free for children.

For more information about the event, stop by the Sister Bay Village Hall at 6 pm on Nov. 8. Opper will be available. You may also contact him at 920.606.9523 or via email at [email protected].