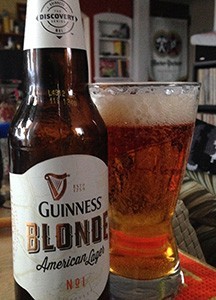 As I walked past the usually unremarkable beers of a city grocery store, I found myself doing a double take. I saw this particular beer out of the corner of my eye, so I had to stop and look again before it registered with my brain – Guinness Blonde American Lager, No. 1 in The Discovery Series.

I love a good lager, and they are so rare. But Guinness choosing to make an American lager? What the…?

It hasn’t happened for a while, but on the rare occasion when I find myself faced with nothing but cheap American lagers, I give them a dose of salt just to add some flavor. I know American lagers once had character – malt character and/or hop character, depending on the brew – but they’ve been so abused by megabrewers interested in market share and bottom line that we have all come to think of American lager as a bad joke.

Is anyone else embarrassed that Guinness has to show us how to make a great American lager?

Guinness Blonde is a great American lager with a beautiful malt body followed by a crisp hop bite courtesy of Willamette and Mosaic hops. I’d never heard of Mosaic until picking up this beer. It’s the only hop variety I’ve seen that includes a trademark symbol. Overlooking that, it’s supposed to have a mango/tropical fruity flavor, and that may be why this delicious, crisp lager also has a very pleasing ale fruitiness in the mix.

“Famous Guinness yeast” is the final element that helps to make this a very special beer.

Let me say it one more time – this truly is a great American lager, made right here in America, by none other than City Brewery of LaCrosse, but brewed in Latrobe, Pa., former home of Rolling Rock. City Brewery bought the Latrobe brewery in 2006 when Anheuser-Busch bought the Rolling Rock name but not the brewery from global brewer InBev.

The beer was first released in September of last year, to the dismay of market analysts who thought Guinness was diluting its longstanding Irish heritage by producing an American lager. What a bunch of dimwits! Great beer transcends all labels, borders and boundaries.

And Guinness has long been an experimenter in an attempt to reach an even larger market than the one that loves its stout. I heard there once was a Guinness Light, but that can’t be true. Can it?

A few years back Guinness introduced a black lager. I remember buying a sixer to try it, but have no memories of it, which says to me that I found it wanting in the dark lager department. The standard was set for me earlier in this century when I was lucky enough to visit the Budweiser Budvar Brewery in the Czech city of České Budějovice, where they had just started brewing a dark lager that they hadn’t made since 1953, and I still have dreams about that black beauty of a dark lager, which, unfortunately, has not found its way into the American market; at the time I was there, Finland was the only export market for the dark lager – those lucky Finns! So, Guinness’ dark lager had very high standards to live up to for me.

But this American lager I would put up against any American lager on the market. This is a world-class lager. I want an endless supply of it in my refrigerator. 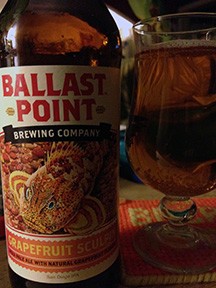