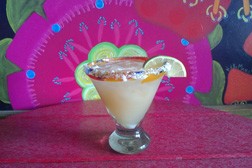 Half a lifetime ago, I flew more than 8,000 miles from Australia to a northern Mexico border town to celebrate my birthday with my father. I had a wedding to attend in the USA later that month and spending my birthday (May 5) with my father on Cinco de Mayo seemed like a great idea. In a bar next to the hotel, I asked the bartender in my best broken Spanish what was tomorrow’s parade route and the best events to attend the next day. He stared at me blankly. I tried again, letting him know Cinco de Mayo was my birthday.

“Amigo, I no think we have parade here for your birthday,” was his priceless response.

He was right. There was no parade, no festivities, no fireworks, nada. Turns out Mexico’s Independence Day is Sept. 16 and for parades, we would need to travel south some fifteen hundred miles to the city of Puebla. Seemed a long trip for a parade, so I asked for Mexico’s national cocktail to enjoy while we contemplated our next move.

Cinco de Mayo is significant for a symbolic victory a poorly equipped and drastically outnumbered Mexican army had over the mighty invading armies of France’s Napoleon III at the start of France’s short-lived occupation of Mexico in the mid-1800s. El Dia de la Batalla de Puebla since has been a source of pride for Mexicans wherever they reside, but over the years has become for all and sundry a reason to enjoy Mexican food, culture and adult beverages.

The margarita I was drinking tasted very different (and better) from those I had mixed or drank previously, so I asked the bartender did most people make theirs the way he had made mine?

“You are drinking La Paloma,” he answered.

Turns out there is some debate, Mexico’s national cocktail may not be the margarita at all but La Paloma (The Dove). It’s uncertain if the margarita was even invented in Mexico. In my opinion, La Paloma is the perfect drink of the season – deliciously tart, nice balance between bitter and sweet, and not too boozy so one can enjoy a few on a hot, humid summer’s day.

(Note: Grapefruit-flavored soda, such as Squirt, works fine instead of juice and soda splash)