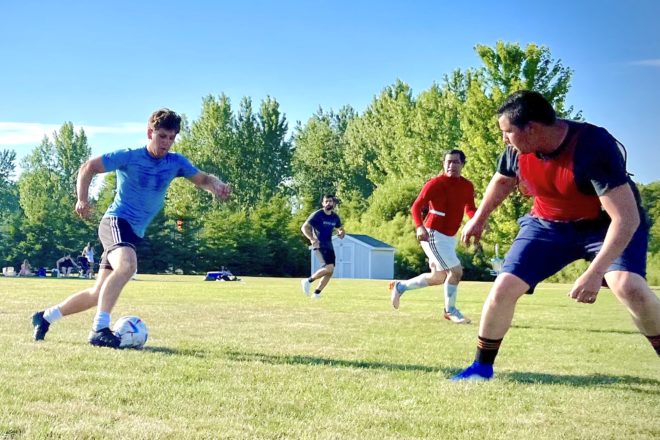 An organizer of the adult five-versus-five soccer league that’s kicking off its first season in Door County hopes the program will establish itself on an annual basis like other summer sports in the county.

“It’s something that I thought the county’s always been missing,” said Ben Fitzgerald, who also plays on one of the league’s eight teams. “I know there’s a lot of people up here who love the sport, and we’ve seen broomball and the volleyball league and [Door County League baseball] do so well up here for such a long time, I thought, ‘All right, well, soccer would go, like this would catch [on].’”

Fitzgerald, who played on the Gibraltar/Sevastopol cooperative boys soccer team from 2016 until 2019, set out to start the league to keep feeding his competitive juices. Then after a couple of teams jumped on board, enthusiasm started to build.

Teams are sponsored by a local business and play every Sunday evening at the Sister Bay Sports Complex. The season will culminate with an end-of-season tournament Aug. 14.

What Is 5-person Soccer?

Unlike traditional 11-player soccer – with 10 field players and a goalkeeper – there is no one at the goal in the five-player version, Fitzgerald said, and no player may stand in front of the net for an extended period of time. It also uses the smaller, six-foot-by-four-foot goals on the 35-yard-by-50-yard fields of the youth soccer program.

“[The fields have] worked pretty well so far,” he said. “They may have been a little bigger than I would have liked, but those lines are there, and we’re happy to use them and thank the youth program for letting us share those with them.”

Games are 60 minutes long, with a five-minute break at halftime. Teams may have up to eight players on a roster.

There are no offsides calls and slide tackling is not allowed, but beyond that, the league follows most traditional rules, which the players enforce themselves.

“I think that’s gone well so far,” Fitzgerald said. “I think it keeps things more civil at times, actually, giving the players the responsibility [to officiate].”

Instead of throwing the ball in when it goes out of bounds on the sidelines, he said the ball is kicked back into play, with all free kicks being indirect kicks.

Fitzgerald said he wanted the league’s games to simulate what it feels like to play a pickup soccer game, similar to the Door County Pond Hockey Tournament, which he helps to stage with his father’s company, the Peninsula Pacers. He said the intensity is right where he hoped it would be.

“It’s been competitive; it’s been fair; it’s been fun, so I hope it keeps going that way,” Fitzgerald said.

The league is open to men and women ages 18 and older, with most of the players this summer being male, and a couple of women also participating. Teams include many international summer workers, local residents and returning college students, and there are several teams from Sturgeon Bay.

“It’s been awesome getting all these people who love the game together to play like this on Sundays,” Fitzgerald said.

Fitzgerald said that if enthusiasm grows, the league could expand to more teams, attempt a 7-on-7 format or stage some games in Sturgeon Bay, given the participation from city teams.

Some teams could still use members. Fitzgerald said players who are interested should have some experience with soccer, but previous play in an organized program isn’t required.