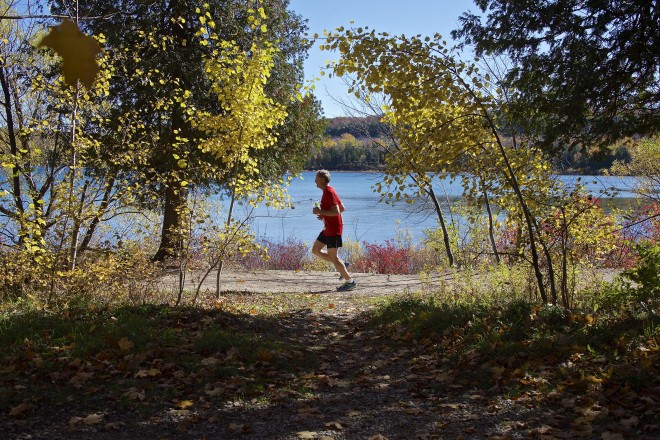 The course begins in Gills Rock and ends at Sunset Park in Sturgeon Bay, traversing 50 miles of Door County’s western coastline. Race Director Sean Ryan, who also directs the Door County Triathlon, Door County Century Ride and other silent sports events across the country, said he drove to Gills Rock, turned on his odometer and headed south, taking right turns toward the water everywhere he could. The odometer clicked 50 miles right outside of Sunset Park in Sturgeon Bay and he had found his course.

The course is flat and fast relative to most ultramarathon events. Sigl won the event last year with a time of 5:32:24. Bitter’s 2011 course record still stands at a time of 5:26:52 and it was the fastest 50-mile time in the country in 2011. Also returning in the men’s field is Mark Thompson from Iowa City, Iowa, who won the race in 2013.

In 2014, one of the turn signs near mile 28 was missing, causing the top three athletes at that point in the race to run off course. Bitter, the favorite to win, ran about two miles too far on Peninsula Players Road before a car passing by told him that he was off the course. Bitter did not continue the race, but will return this year after a hard look at the course maps.

The Fall 50 earned championship status after Ryan placed a bid to the USATF. The bid lasts for two years, ending with the event this year. One of the challenges Ryan faced in placing his bid to the USATF council was the Fall 50’s relay event, which brings in 450 teams, often dressed in costumes and racing for beer rather than national champion status.

“There are two very different races going on,” Ryan likes to say. “[The council] is purist. They don’t want to see a bunch of hyenas running down the road during their championship.”

The top five solo finishers in both the women’s and men’s division will split a $12,000 prize purse and the winners will be crowned United State National Champions.

The race begins in front of the Shoreline Restaurant with the solo runners at 7 am. Relay teams begin between 8 and 10 am depending on their expected finishing time. Most runners, solo and relay, are expected to arrive at Sunset Park between 4 and 6 pm.