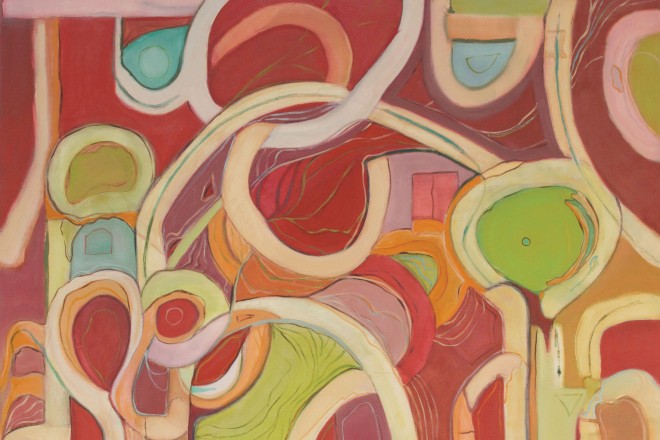 Nan Helscher’s hands are covered in paint. Not the oil paint she uses in her studio, but house paint. Earlier in the week, she grouted the stone on the floor and lime-washed the walls in her new house of straw bale construction. Right now, the final steps toward completing the building project with a contractor open to her hands-on collaboration, Russ Cockburn, take most of the energy of this Door County artist. But the way she has approached the construction of her new house reflects the way she undertakes all of her art:  as an ever-evolving form that responds to and represents wherever she happens to be and how she adapts to new surroundings and obstacles.

Nan Helscher has made art a part of her life from the beginning. Even as a child, she says, “If I didn’t have an art project, I wasn’t a happy person.” Raised outside of Minneapolis, she attended college in St. Louis before working in various fields that always allowed her to be artistic, like floral arranging and faux finishing. Still, in these endeavors she was not fully able to develop her own work.

Then one day a friend sent her a brochure about the Peninsula Art School in Fish Creek, Wisconsin. Intrigued by the work of one of the teachers, Margaret Lockwood, Helscher knew she had to attend. She was immediately drawn to Lockwood’s descriptions of her painting classes. With tranquil colors and often larger-than-life canvases, Lockwood’s oil paintings are well known in the Door County art scene. Helscher couldn’t make all of the dates of that first class. But undeterred, she called Lockwood and asked if she could study with her privately. “I had never done that before,” says Lockwood, but she offered to give Helscher lessons in her studio that winter in Door County. And that was the beginning of a friendship, an inspiring mentorship, and Nan’s love for the peninsula.

Helscher still remembers arriving in Fish Creek for the first time and falling in love with the view. She knew it was a place she could stay and create art. Now she has lived here 10 years. After moving, she continued to take lessons from Lockwood. In her training earlier in life, teachers encouraged Helscher to mimic well-known artists as a means to develop her technique. Lockwood was helpful to her development because she encouraged Helscher to follow her own creative instincts. “I was helping her with technique,” says Lockwood, “just things like color, shading.” Now Helscher shows some of her pieces in Lockwood’s gallery, Woodwalk Gallery in Egg Harbor, alongside Lockwood’s own oil paintings and the work of many artists familiar to the peninsula.

The experience of living in Door County has influenced Helscher as much as the teachers she has found here. She has always derived her inspiration from nature, and here, especially in her new, low-impact house that incorporates natural themes, the inspiration is everywhere. The textures Helscher finds outside are what catch her eye first. “Leaves, rocks, especially,” she says and, reminding herself of an example, runs into the other room to grab a stone she found on the beach and later incorporated into a sculpture.

Helscher’s play with texture, and attention to natural patterns, is ever-present in her work. For example, her sculptures made of hundreds of hammered nails are reminiscent of riverbeds or tree bark, and effectively marry the industrial and natural. She likes the challenge of “turning something nature gave us as beautiful into something else that is interesting.” Even in her new house, she has used these inspirations to guide the design. The concrete floor, which she worked to create with concrete artisan Dylan Lauger, spreads from the front walk through the main entry and all through the house like the branches of a great vine in different colors.

People may find Helscher’s work hard to characterize. As she has noticed, they don’t walk into a gallery and say, “Oh, that’s a Nan Helscher,” because she has worked in so many different media and styles. “I don’t have a style, and I’m not sure I ever will,” she says. Yet each new form Helscher embraces highlights what she most needs to express at that moment. Some of Helscher’s most recent work, which is on display at the Blue Horse Bistro in Fish Creek, reflects her interest in collages. “The collages are itinerant and reflect the months of movement, both residentially speaking and emotionally,” she says. These most recent collages are abstract and small, and they leave “a sense of there being more behind what one initially sees.” Helscher explains that they came out of her time in the small apartment she lived in while her new house was being built. Now that she is building a new studio next to her house, she will move on to different forms. “The first thing I will do is get out a big canvas and see what develops,” she says. “With everything in my life exactly where I want it to be, both where I reside and personally, I am anxious to express myself in several mediums.”

Even though right now she is not focusing on salable pieces, Helscher has been pursuing her art each day as she stains a doorframe or does other work on her house. One glimpse of the straw bale construction will help a person “characterize” Helscher’s work. A lifelong friend of Helscher’s summed up the idea of her house as art in saying to her, “People who purchase your work don’t get to see the nexus between you and your art. Your house, in contrast, will advance that nexus.” The way she has used lines and textures is indicative of these techniques in her work. Her connection to nature shows through the soft lines of the plaster-covered straw bales, the Door County stone, and the wall of windows overlooking the surrounding woods and fields. Work on the house, and “the collaboration process with such a visionary builder as Russ Cockburn” have given Helscher new energy and ideas to use in her art.

At one point in the building process, Helscher encountered a problem with the consistency of color as she stained window frames. Undeterred, she noticed how the new colors complemented a different stain on the door and a different color on the wall. Is this fortuitous stain-story a connection to Helscher’s commitment to exploring where her art can take her? She laughs, “You have to be flexible.” In art, and in life, she doesn’t have a direct route. She gestures toward the stone vine she conceptualized for her floors. “I have 50 paths, and I’ll probably go down every one of them. ”