When The Farm started 50 years ago, Carl and Ruth Scholz wanted to create a museum. It would be a showcase of rural America, preserving the history of farming practices and equipment. 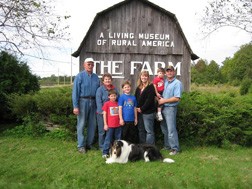 Now in 2015, five decades has earned its own history. Modern farming in 1965 is now antiquated and what the Scholzs called historic is even farther back on the timeline of American agriculture.

“I think acreage-wise, things are not that different than many years ago,” said Carl Scholz. “The use of the acreage is a little different. There are more of the so-called cash crops but that farm of yesterday is about gone.”

Carl sits in his big armchair with a reading light over his left shoulder. He sifts through old articles and publications from The Farm’s 50 years.

Serving as the youngest superintendent in the state at 26 years old while at Sevastopol schools, Carl devoted himself to education. Ten years later, he and his wife Ruth, along with three other couples opened The Farm to continue educating those who were curious about rural farming.

“I don’t think we ever started it expecting to make a lot of money,” said Ruth. “Because of Carl, the education part of our heritage was what was very important for us.”

With each year, the buildings, machinery and farming practices become more historic and their value in preservation and education grows. As The Farm celebrates 50 years, the Scholzs and the Tanck family, who took ownership in 2002, continue bringing life to the agricultural foundation that Door County, the state of Wisconsin and all of rural America was built on.

“We knew nothing,” said Ruth. “The gift shop actually supported The Farm for quite a while. We charged 75 cents for kids and a dollar and a half for adults and from the beginning we sold season tickets for double.”

Ruth remembers opening day 50 years ago, when there was a line out the barn door. Over time, the Scholzs learned what people loved most about The Farm and catered to their visitors. 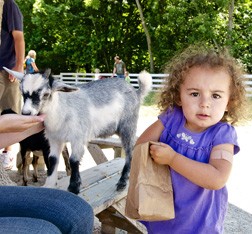 “We kept all the animals that were about to give birth on another farm,” recalls Ruth. “And then one day we had a farm boy working for us and it happened that one of the cows calved early and he invited everyone to come over and watch while this was happening. It was a wonderful thing and everyone loved it so from then on, everything was born here.”

On the peninsula, agriculture came in the form of cherries. When the Scholzs and six of their friends were looking for land to develop their hobby farm, they found 40 acres on what was the first commercial orchard in Wisconsin. Joseph Zettel, a Swiss immigrant, planted fruit trees there in 1862.

The land purchased by the Scholzs offered 18 clear acres and 22 acres covered with thick woods. Immediately upon opening, they built a barn and stable. Since then, the lot has curated buildings from around the county that have their own historical significance.

“All the original owners, they always embodied that it’s going to be an educational experience,” said David Tanck. “I think it’s transcended that. It’s not only an opportunity for education, an opportunity for kids, but we have five historic buildings here. It’s got historical significance.”

The Bassford house, built in 1856, was the first building in the Town of Sevastopol. The Nature Cabin housed the workers that built the Sturgeon Bay Ship Canal in the 1870s. The Granary is built with white pines that were destroyed in the Peshtigo Fire of 1871, the most deadly firestorm in United States history.

Housed in each building is a piece of farming history that goes even deeper into the agricultural fabric of the county.

“I think back then, even people that were down in the cities, they were better connected to farming. Fifty years later, it’s hard to find. To think they did what they did and thought it was going to be real special. I don’t think they knew that, I think they were just taking a real chance,” said Tanck.

Tanck worked at The Farm for six years through high school and college. Growing up on a dairy farm, it was simply an extension of the work he loved doing at home. But the tourism aspect allowed him to meet people from across the country and share a part of himself that is now lost on most visitors to the county.

Now, as an owner and with the rest of his family helping, he appreciates the people who keep coming back even more.

“There’s something about those folks that keep coming back year after year, generation after generation, that they’re looking for a constant. So when they see it with their children, they remember what they saw and that reinforces their memories and their relationships that they have with their kids. There’s something to say about The Farm being a constant and I don’t think that means we’re living in the past,” said Tanck.

The Scholzs spent nearly 35 years with The Farm before looking to move on to other projects. With their own kids established with careers and families outside of the county, the hardworking employee from the 1980s came to mind.

“We were eager to have somebody continue it as it was. David wanted to have The Farm, I guess that was his goal back in college, so we were happy that he could get it,” said Ruth. “We thought about it all the time but we weren’t sure he was going to be able to do it at the time we were going to have to.”

The Scholzs were getting older and, at the time, Tanck was working in Michigan. But when he took a job in Milwaukee and moved back to Wisconsin, things fell into place. 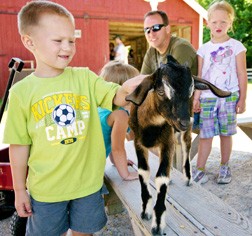 “It was a surprising call,” said Tanck. “I think when it all came down to it, when a decision was made, I think they just felt that their lives were taking a different path and so it wasn’t a good fit. I think Carl and Ruth felt that our family, and what we knew, knowing me personally, that if there was a family that could do it, I hope that they would think they were going to leave it in good hands.”

Carl believes there is no other family in the world that could manage The Farm like the Tancks do. The help offered by the Tancks’ many extended relatives in the county ensure it continues running smoothly while holding onto the history that the Scholzs built 50 years ago.

Now, Tanck appreciates The Farm for its ability to bring his family together. Each family member has their role and it has allowed them to spend time together at a place that has been important in each of their lives for decades.

“It allows us to keep our family together in a way that I don’t think a lot of families are able to stay together,” said Tanck. “The relationships you have on a family farm or in this type of business, you really are able to stay connected on a special level.”

“I will tell you, and I don’t think many people can, but when you’re 16 years old, and you can say today that the best job you ever had was when you were a 16-year-old kid, and you still have it today, that’s pretty special.”

In commemoration of the 50-year anniversary of The Farm, long-time patron and author Maggie Weir, from the Door County Historical Museum, wrote a book about The Farm. It depicts all of the buildings, animals and activities found on The Farm with matching illustrations also by Weir. She will hold a book signing at The Farm on Saturday, Aug. 8.