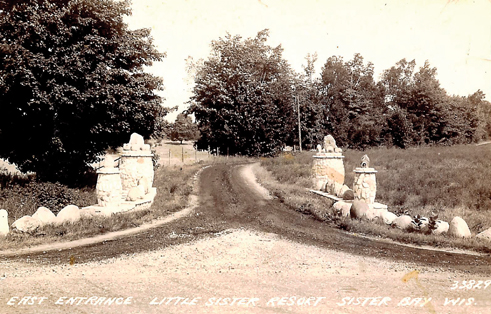 More than half a century ago, a desolate potato field sat in the view from Little Sister Hill on the north end of Ephraim. Rocks covered the dry grass that still flooded every spring. A few years later, rolls of golden hay dotted the field. Now, tall trees shade fairways and hide nine checkered flags blowing in the wind from the bay.

Bay Ridge Golf Course in Sister Bay celebrates its 50th year and, before Peter Trenchard’s death on March 2, 2016 at the age of 78, he and his wife Dianne saw the sport and the county evolve together in a strange brew of tourism, family and community service.

“Peter makes things happen,” said Dianne of her late husband, shortly before his death. From their tall dining room windows, the fairways of Bay Ridge stretch through the trees. “He loved to golf but he was not a great golfer.” 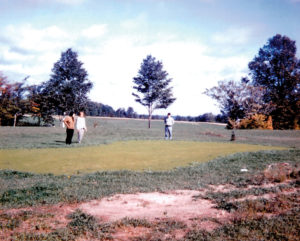 Instead, he spent most of his time as a stockbroker in the suburbs of Chicago. After buying a cabin in Lily Bay, his visits to the county became more frequent. A few years later, he heard a golf course was for sale.

Bill and Vi Davis owned the course and they transformed it from a rocky potato field to a golf course over the course of a decade. They couldn’t plant grass until all rocks were taken out. The rocks couldn’t come out until the hay was cleared. The hay couldn’t be cleared until a farmer showed up to haul out all 700 bales. It took two years to put a seed of grass in the ground. The planted trees were barely a foot tall, but on July 4, 1966, the course opened.

When it came to Peter in 1976, he started the ritual of planting 50 trees every year. Dianne began planting flower gardens in 1983, the year after they were married on the seventh tee.

“We were young, crazy, impetuous,” said Dianne as she remembered the quirky struggles they faced early on, like every spring when water would run down Little Sister Hill and flood the driveway, forcing them to use rowboats to get around. “Running a golf course was not anything I ever prepared to do, but I ended up in the golf business.”

Peter always wanted to be in the golf business and his involvement did not stop at Bay Ridge. He was a founding member of the National Golf Course Owners Association and served three years on the Executive Committee of the United States Golf Association, bringing the couple as far as New Zealand on golf business.

“Peter had a lot of friends in the golf business. It became part of our social life, travelling,” said Dianne.

He even helped the village of Deerfield, Ill., buy its own public golf course, a trend that continued as park districts began viewing golf courses as public parks.

Steeped in the world of golf for so long, few people are as in tune with how the sport and culture has changed from the rocky potato fields of the past.

There was a period of overbuilding courses in the 1960s when Bay Ridge first opened its fairways. The 1960s were the first time that professional golfers became household names. Players like Arnold Palmer, Jack Nicklaus and Mickey Wright were dominating the circuit and the sport was suddenly a part of American culture. That demand and the emergence of the post-war middle class spurred the development of courses across the country where 380 courses opened each year during the decade.

Bay Ridge opened as a public nine-hole course in this string of golf development to combat the private clubs that boomed during the Roaring 20s. The public course attracted Peter, a social golfer who never cared for the exclusivity of a private sport.

“This was a real busy place,” remembered Dianne of the first years at the course in the 1970s. “Tourists were different before. People checked in and stayed at hotels. Our busiest days were Monday, Tuesday and Wednesday.”

There were fewer courses back then too. Horseshoe Bay Golf Club and The Orchards at Egg Harbor popped up around the more recent golf boom in the 1990s, when real estate developers were anticipating the retiring baby boomer generation of golf fanatics that never really came. The Trenchards even doubled down by building Cherry Hills Golf and Lodge in Sturgeon Bay, which they kept until 2004.

“In the 1990s, golf was huge and it has fallen off,” said Dianne. “[Back then] the national golf association was telling people to build golf courses. We overbuilt courses and now we manage that with difficulty. There’s supposedly an upturn but the numbers aren’t there nationally.”

But Bay Ridge has withstood it all thanks to, Dianne believes, their involvement in the community. For 11 years, Dianne cooked for a dinner and golf event to benefit Scandia Village. That money became fodder for Bargains Unlimited. Peter also involved himself in the arts community with The Clearing Folk School and Peninsula Players.

“When you can’t give money, you end up giving time, giving love. This is a family business and it’s always been a family business,” said Dianne, as if her family includes everyone that has lined up on that first tee box.

Peter passed away on March 2, 2016 after a battle with Parkinson’s disease. In the preceding months, Dianne said one of the most difficult parts of his battle was the time away from his golfing life. Last year, he and Dianne sold the course to their son Erik Anderson, who lives in Los Angeles. At the top of Anderson’s list is to put the rocks back on the fourth tee. It was a “rite of passage” for Gibraltar seniors to rearrange the rocks every year, said Dianne.

“Peter has been robbed of the pleasure and satisfaction of having a project and the time to do it,” said Dianne. “The hard part is that it’s his baby but he’s not able to share in it.”

So Dianne worked for both of them in the months and years before his passing, spending time in the dirt last year planting gardens and making it ever harder to imagine the rocky potato field that once stood on its grounds 50 years ago. Now she continues to work in his memory and the memory of a sport and a place that he loved.

She takes up an old photo of the gravel driveway marked with crumbled stone and smiles to herself.

“For our 50th year, I want it to look magnificent.”

Source: The Changing Face of the Game and Golf’s Built Environment, Clemson University 2012