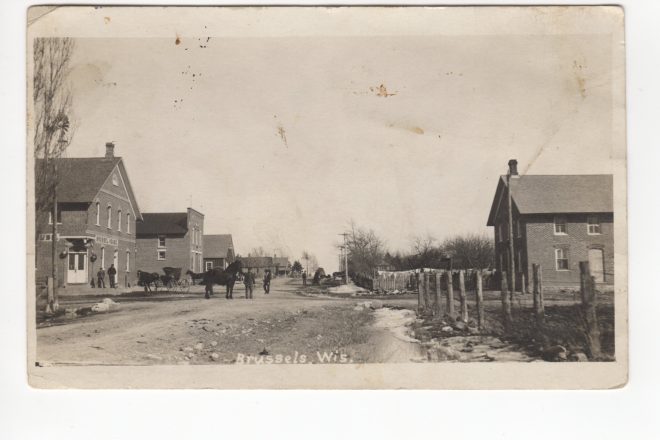 In 1906, when his daughter, Mae, was two years old, Gabe Pierre established the Brussels Store on School Road in Brussels. By the time a newspaper story celebrated the 50th anniversary of Pierre’s store – “Brussels’ oldest business establishment” – Mae reported that she’d been clerking there since she was eight years old.

By 1956, Mae and Clarence Henquinet, whom she’d married in 1926, had been in charge of the store for decades, but she hadn’t forgotten the early days, “when people were very leery about the first canned goods that came out; overalls cost 98 cents; everyone bought coffee beans in 100-pound sacks and ground their own coffee; and people washed their clothes with bar soap because that’s all there was.”

Clarence remembered buying 400 100-pound bags of flour to keep customers supplied throughout the winter. He also recalled that before Highway 57 was built during the late 1920s, the weekly trip to Green Bay took two days, whether by a team and wagon, or a horse and sleigh.

Both Mae and Clarence died in 1970, and as far as Brussels long-timers can recall, that was about the end of the store at the “Five Corners”: the locals’ nickname for the area that encompasses the intersection of County Roads C and DK, School Road and Junction Road. A hardware store owned briefly by John Long ended in bankruptcy.

During the mid-1980s, a man from Chicago purchased the building, and before he died in the early 2000s, the second-floor apartment was rented to a series of occupants while the downstairs remained vacant. After the last tenants left, the windows were boarded up, the garage door and roof collapsed, and ivy grew so prolifically that it almost hid the building, including the colorful advertisements painted on the west brick wall generations before.

Brussels had been without a grocery in that location for nearly half a century when Heather Truett and Nick Waack, who had purchased a cabin in Gardner in 2014, bought the old Brussels Store in March 2017 and reopened it as the Pioneer Pantry in 2019 to a steady stream of customers.

Want to read more about Truett and Waack’s journey to reopen this iconic location? Check out the Early Summer 2021 issue of Door County Living magazine, or visit doorcountypulse.com/brussels-store-is-empty-no-more.