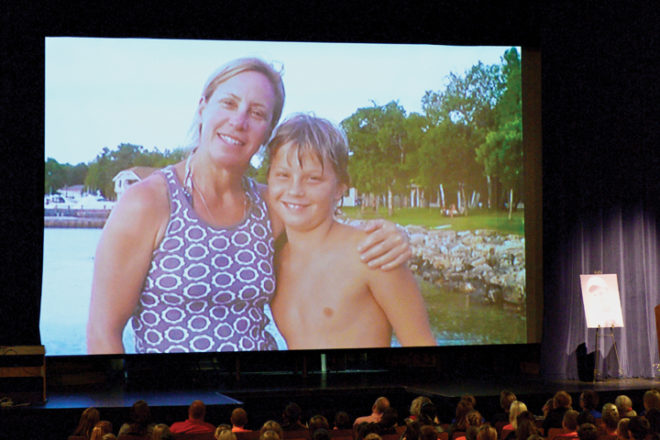 In this year’s Philanthropy Issue we bring you the stories of seven people inspiring others in our community. We start with one who is with us only in spirit, but what a spirit he is.

There were times during his chemotherapy treatments that Bo Johnson didn’t understand why he was going through such a painful ordeal.

At 12 years old the blond-haired, blue-eyed young athlete was diagnosed with leukemia. He vowed to fight, but sometimes the rounds of tests and chemotherapy at Milwaukee Children’s Hospital were too much.

“There were some kids on my floor who just sat in their rooms, pulled the blinds down, and shut the door all day,” he told me from his bed at his grandmother’s house in early September of 2012. I asked him if he ever wanted to do that, too.

“Sometimes I did,” he said, before motioning to his mother. “But she wouldn’t let me.”

But as his fight grew tougher, so did Bo, and it was his strength in his most difficult hour that would inspire a community and people far beyond its borders.

In August, almost a year after he was diagnosed, his doctors told him he would lose his battle. Bo chose to come home, to finish his struggle amongst family and friends. By the time he died four weeks later he had become a symbol of hope and a messenger of kindness.

Bo and his mother Annika had been very public about his struggle throughout his ordeal. They launched a CaringBridge page to keep a journal of his status, and a Go Bo! Facebook page soon followed. At the time, the openness was meant to give people a way to show support for him.

But a funny thing happened when Bo came home from the hospital, by then a 13-year-old boy wise beyond his years. This young man who couldn’t sit up on his own, whose one eye was swelled nearly shut, and who had long since lost his hair, somehow turned the game on its ear.

He took all that support, goodwill, and love and turned it back around to the community in exponential doses.

He absorbed the beating, smiled broadly, and through his actions, said to everyone:  “This is my life, this is what I’ve been given, and I’m going to make the most of it. What will you do with yours?”

I’ve seen loved ones near the end, in those final days before cancer finished them off. When I left Bo that day, I dropped my bag on the stoop, hunched over, and grabbed my knees. I heaved out a deep breath. I was mentally exhausted from keeping myself composed for three hours with him.

Later that day a friend asked me how Bo was doing. “He was amazing,” I said, “but I don’t think he has much more than a week left.”

Boy, was I ever wrong.

Bo went to the beach that night. A couple days later he went to the Gibraltar High School football game at Algoma. He made it to the Packers’ season opener and spent time with the team. He was the captain of the Gibraltar homecoming football game, which they won against Sevastopol – their only victory of the season.

And most impressively of all, he made it to the stage of his school to give a speech to the classmates he would be leaving in days, imploring them to be better to each other.

When it came time to give his speech, his uncle Rolf Johnson asked him if he was sure he wanted to do it. Bo picked up on his uncle’s protective instincts and brushed them aside.

“These guys have seen me in my wheelchair, bald, they’ve seen me pee in a bucket,” he said. “I’m not embarrassed by any of this anymore.” He had something to say, and with little time to waste, he didn’t care how he looked or sounded when he said it.

He told stories of the little things that people had done for him, and hoped against hope that he’d live to get a chance to do the same for others.

Bo Johnson was not inspiring because he was a young victim of cancer. Bo Johnson was an inspiration because of how he used his stroke of terrible luck to be better, to help others, and to change people in ways that will never be measured.

He left behind a community forever changed and the Go Bo Foundation, which raises funds for the Children’s Hospital of Wisconsin, the MACC Fund, and to help other families who are battling cancer get the little things that meant so much to Bo.