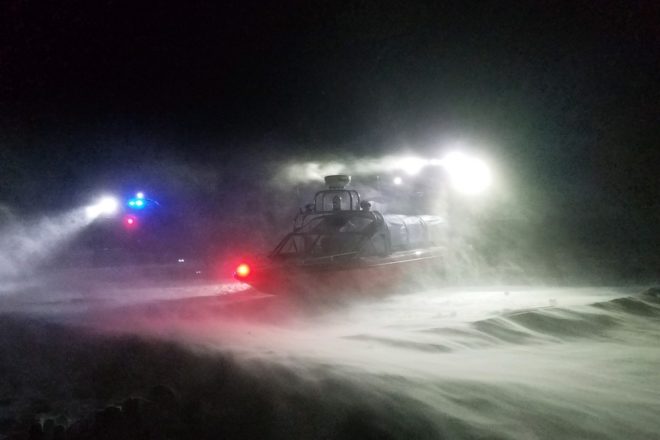 Tuesday, Jan. 29, was not a fit night out for man or beast, but that didn’t stop DNR Warden Mike Neal and a Coast Guard crew from firing up their respective airboats to rescue seven men stuck in an ice fishing shanty about a mile northeast of Snake Island.

“This is about a thought process,” Neal said was the takeaway from the successful ice rescue. “Think about the what-ifs. If this is going to go wrong, how am I going to deal with this? Are the fish really worth it?”

One fishing guide told the Pulse he had warned the anglers not to go out on the ice that day. When they realized the UTV that had taken them far out on the ice would not get them back to land, they called the guide to rescue them, but he was not in the area and advised the men to call 911.

The guide called Neal about the situation  around 2 pm that day. Neal called the Door County Sheriff’s Dept. and told them to expect a call from the stranded anglers, which came within 30 minutes of Neal’s heads-up.

Neal was already off duty for the day, but he geared up and headed to the Gibraltar Fire Station, where he keeps the 1000 Island airboat, which is specifically built for ice rescues. As he headed to Sturgeon Bay with the airboat, Neal got a call from the Coast Guard. They arrived with their airboats at the Sand Bay staging area two minutes apart and decided to run two airboats to the rescue as a “safety redundancy,” Neal said. “And off into the dark we went.”

Neal had contacted another guide who operates in the area where the anglers were stranded to get the longitude and latitude for the shanty.

Neal said the guide was spot-on with directions. The 911 dispatcher had told the men to leave the stuck UTV running with its lights on to help rescuers spot them.

With the blowing and drifting snow, Neal said visibility was limited to about 150 yards, but they finally spotted “a little beacon way off in the distance,” which was the UTV.

“It was about as ugly as I’ve been out in,” said Neal, who has been a warden for 20 years.

All seven men were huddled together in a single shanty, embarrassed but unharmed.

This was Neal’s third ice rescue this season. One of those occurred earlier in January, when he rescued a deer stuck in the ice a mile offshore.