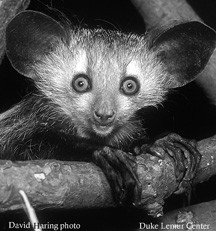 A small primate found only on Madagascar is said to be one of the “10 ugliest animals.” Called the “Aye-Aye,” its scientific name is Daubentonia madagascariensis. Its body is 14-17 inches long and its long tail reaches 24 inches in length. The oversize triangular ears, a short snout, a pink nose, big eyes, and long delicate fingers contribute to its unusual appearance. An Aye-Aye is nocturnal and spends daytime balled up in a nest of leaves. At night it hunts by tapping on trees with its long middle finger and listening with its big ears for sounds of wood-boring insect larvae. When it detects their presence, it gnaws away the overlying wood to reach in with its skeletal-like middle finger and fishes its meal out of the bore hole in the tree. It also uses the long finger to scrape out and eat the flesh of fruits and coconuts. The Aye-Aye’s large eyes can see well in darkness, and its large ears are very sensitive to sounds of insect larvae. Unfortunately, Aye-Ayes are threatened by loss of habitat due to human activities. If they go extinct, we will have lost a remarkable animal that is so ugly it is actually beautiful. (natgeo.com/animals/mammals/aye-aye; lemur.duke.edu/animals/aye-aye; amnh.org)