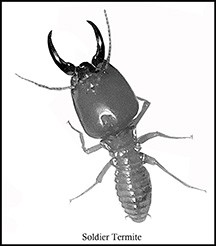 Ever feel like banging your head against the wall to get someone’s attention? A species of mound-building termites (Macrotermes natalensis) that live in Africa do just that. Some members of the colony are specialized as “soldiers” that have a large, thick head. When provoked they bang their head against the floor of the tunnel to alert other soldiers of a threat. The vibration of the banging is picked up by special sensors on the termite’s “feet.” Throughout the colony other soldier ants begin beating their heads against the floor, spreading the alarm. The frequency of the head bangs signal the direction of the threat. The delay between head bangs, from one to 20 milliseconds, tells the colony whether the threat is from the left or right, and soldiers swarm in that direction to try to drive off the invader. (Science News, Aug. 23, 2014; F. Hager and W. Kirchner, 2014, J. of Experimental Biology, July 15)